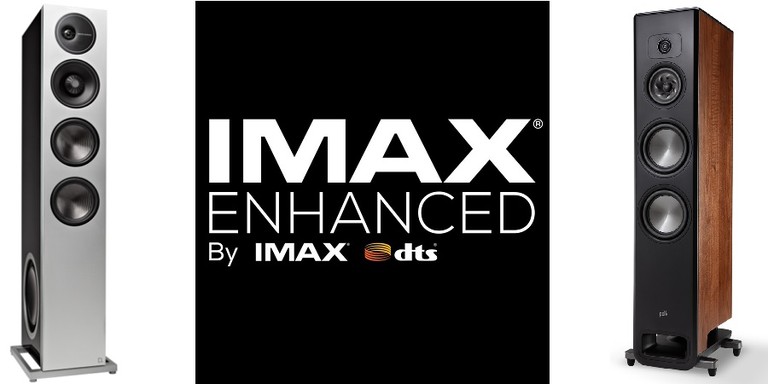 What does it take to gain IMAX Enhanced certification for loudspeakers? To quote from the press release:

Our intent in joining the loudspeaker certification program was to reproduce the signature IMAX sound without compromise. It was essential to preserve the impact and dynamics moviegoers have come to expect from IMAX, therefore, we considered sound pressure level (SPL), frequency response and the consistency of the speaker’s performance when evaluating eligibility for loudspeaker certification,”

That isn’t a very specific criterion set for ascertaining the needs for IMAX Enhanced certification for loudspeakers, except that response linearity and dynamic range are factors. We don’t know how linear the response needs to be, or how much SPL that the speaker must be able to cleanly produce. We also don’t know if dispersion or directivity is a factor. The specific values for these characteristics are only available to licensees of the IMAX Enhanced certification.

To continue from the above-quoted section of the press release:

IMAX defined a specific set of frequency ranges to be used for testing, which we then ultimately measured against speaker performance. The resulting certification completes the ecosystem of IMAX Enhanced products including content, devices, and loudspeakers, all calibrated to offer the level of performance IMAX demands.

When we inquired about how the characteristics of loudspeaker performance were determined to get this certification, Paul Gallo, a director of product management at Xperi (which owns DTS), replied:

Performance specifications and Measurement techniques were derived from consultations with different loudspeaker manufacturers as well as the standards as outlined by the Consumer Technology Association. (The CTA has published methodologies for measuring in-home loudspeakers and subwoofers.)

When we asked about subwoofers, which weren’t mentioned in the press release, Paul Gallo replied:

Paul Gallo had this to say when asked about the differences between IMAX Enhanced and THX certification:

Our intent is to provide performance metrics that are non-disruptive to any brand’s particular signature sound. Where THX can be viewed as somewhat prescriptive, we wanted to make sure that our performance specs provided guidelines that met the playback needs to support the content but also allowed manufacturers to maintain their unique sonic differentiation.

What do you think about IMAX Certification of loudspeakers? Share your comments in the related forum thread below.

ryanosaur, post: 1435349, member: 86393
Thanks Shady.
Agree that the linchpin is really in the meaning and definition of the testing and how true they keep the distribution of the award.
Based on the testing of the two lines, is there any commonality between the two that help you see a possible definition on IMAX Certification?

Well, both the Deftech Demands and Polk Legends have a superbly flat response. They have a pretty good dynamic range. The directivity control is OK for speakers that don't use waveguides. These speakers have a lot in common and shared a lot of the same engineering team. We need to see more speakers get certified before we can see what the limits of IMAX Enhanced certification is.
ryanosaur posts on November 21, 2020 00:10
Thanks Shady.
Agree that the linchpin is really in the meaning and definition of the testing and how true they keep the distribution of the award.
Based on the testing of the two lines, is there any commonality between the two that help you see a possible definition on IMAX Certification?
mazersteven posts on November 20, 2020 22:38
Maybe I'm wrong but it sounds like another way for the Audio/Home Theater industry under a Licensing Agreement to Market the IMAX brand and make more money.
lovinthehd posts on November 20, 2020 22:24
In a way I like the concept. I wonder how meaningful it would be unless it was widely participated in and spec and performance scoring included (or available) for review. However for me I'm good for the most part with what I have and am accustomed to seeing measurements so it doesn't really affect me but I suppose could help make a buying choice for someone else down the line if it takes hold….
Post Reply