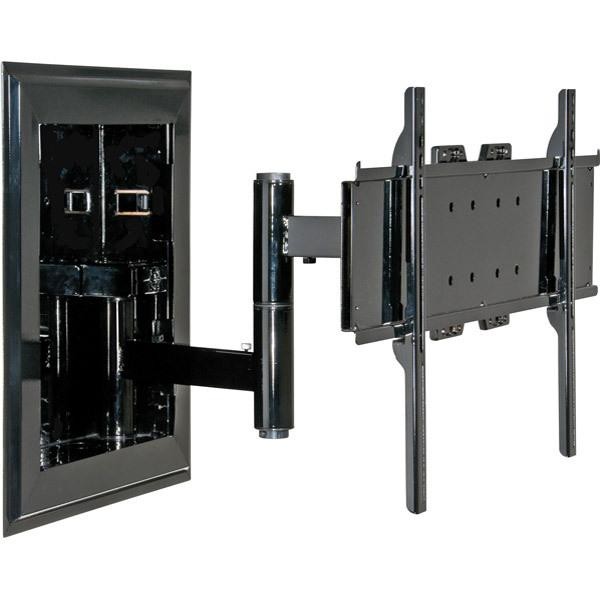 When you purchase a flat panel the biggest travesty (in my humble opinion) is to set it on a piece of furniture as if it is business as usual. With today's available inventory of flat panel TV wall mounts, it's insane to not want to place these beautiful masterpieces of technology up on the wall where they belong. And if you have an even newer flat panel display that is less than two inches in thickness, why not try to get that TV right up against the wall and as flat as it can be? With the Peerless IM760 series you can. It allows installation of a full swing arm mount within the stud cavity of your wall, enabling you to recess that cables, swing arm and mount so that it is quite literally flush against your wall. Seeing is believing.
Next Page ⇨

I agree this article about flat panel TV wall mounting.Amazing information for mounting TV. While i plan to buy flat panel TV to mount on wall. I found Install Express,it's UK based company. This install express is the best place to buy TV as well as to install TV on wall. I would recommend you all who have any doubts about mounting, just consult with install express. Surely you will get clarification for all questions.
cwall99 posts on May 18, 2009 15:55
Um, just to clarify one thing: I understand that this bracket is not for RPTVs like mine. Yeah, so, um, I was just asking for future reference.
cwall99 posts on May 18, 2009 14:23
So what are your recommendations for mounting a flat panel on the wall? Currently, that's not an issue for me since I have a 6-year old monster 57-inch RPTV (it's monster-sized for me, but I know others don't consider that a monster-sized display) that still performs pretty well for me. Looks great when I feed it an HDTV signal or something form my Oppo.

Anyhow, my wife likes to watch these re-decorate your house shows on HGTV, and it always astounds me that a) there's almost never an audio system in these houses, and b) if there is, they let the daffy designer do things with the speakers that are, IMHO, criminal (like taking both speakers of a stereo and putting them next to each other on a sidewall so that you can put a large piece of glass over the top of them and use that as a table.

So, I'm pretty underwhelmed by what I see there in terms of audio, but even televisions get mounted above mantles, and while it may look impressive, it strikes me as a pretty bad angle to watch TV from. I've always assumed that you kind of want your eye to be at the same height as the midpoint of the television (and I'm willing to admit I'm wrong on this, but I sort of view the middle of the television as sort of the visual equivalent to the correct position for your tweeters).

Here, then, (FINALLY) are my questions:

1 - Are you more inclined to mount the display higher when you have a wall-mount device like this?

2 - I live in Detroit, and the best wall for me to mount something like this is an exterior wall. I'm not excited by the prospect of cutting out a huge wad of insulation to accommodate a wall-mount that hides inside the wall. How does this mount handle the need to keep your house warm in colder climates?

Thanks.
westcott posts on May 18, 2009 12:01
Maybe it was just the wall mount I bought but after taking great effort to make sure it was securely attached to the wall (I cut into the sheetrock and added framing) and that the mount was level, it still made the flat panel a little askew. This is because the frame slightly twisted once it was mounted with the flat panel. I had to attach it off center to clear the AV connections to the back and this was enough offset weight to twist the frame. I had to remount the entire thing but it sure looks like it would be a nightmare if the same thing happened with this unit.

Haha, that was awesome… Keep in mind that this mount probably costs around half as much to a dealer and it's really made for a custom installer to “prescribe” for a client who has need of it.
Post Reply