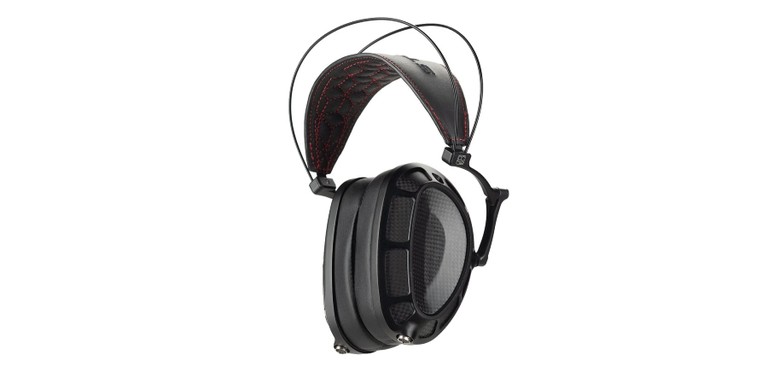 Last year, the British loudspeaker specialists at KEF introduced us to a concept called metamaterial. Instead of using a foam or wool wadding for sound absorption, KEF employed an intricately-designed acoustical device to work as a sound absorber inside the cabinet of its LS50 Meta speakers. The  backwave of the speaker’s tweeter is funneled into a maze-like structure, where 30 small tubes of various lengths act as sound absorbers for different frequencies. According to KEF, the use of metamaterial affords much greater control over the absorption of these sound waves, which could have negative effects on sound quality if given the opportunity to bounce around inside the speaker cabinet. KEF claims that the use of metamaterial is a major breakthrough in acoustical design, and apparently Dan Clark agrees. If you’re into high-performance planar magnetic headphones, such as those made by Audeze and HiFiMAN, you know who Dan Clark is. Known as “Mr. Speakers” on headphone forums like Headfi.org, Dan got his start selling modified Fostex T50RP headphones, gradually making more and more components in-house (including the world’s first 3D-printed ear cups). Within just a few years, Mr. Speakers was a fully mature headphone company building some of the world’s most technologically-advanced planar magnetic (and later, electrostatic) headphones from the ground up. The California-based company, which recently changed its name from Mr. Speakers to Dan Clark Audio, has just launched a new flagship called Stealth —  a high-end, closed-back, planar magnetic headphone, and the first headphone ever to employ metamaterial technology. Aimed squarely at the very high end of the headphone market, the $4,000 Stealth is said to “set a new standard in headphone performance and ergonomics,” and will be going head-to-head against similarly priced flagships from Focal, Audeze, Abyss, Meze Audio, HiFiMAN, and others. So what makes the Stealth stand out from the crowd?

When you put a headphone driver in an enclosure, covering its backside as you do with a closed-back design, all sorts of challenges arise…. There are reflections and standing waves to contend with, and that is a fantastic engineering challenge. A tremendous amount of consideration has to be given to damping and absorption within the cup of a closed-back headphone, to deal with those reflections and standing waves that would otherwise reach the user’s ears.

The Stealth is a closed-back (sealed) ear-cup design. Although there certainly are some great closed-back headphones (ie.Focal Stellia) out there, most companies — including all those listed above — choose an open-back architecture for their flagships. It’s just easier to build a great-sounding open-back headphone, in large part because the sound coming off of the rear of the driver is free to dissipate into the open air. In a closed-back headphone, there are many opportunities for reflections and standing waves to wreak havoc on the sound you hear. That said, closed-back headphones have certain advantages, the most obvious being that they can isolate the listener from environmental noise. They also don’t leak sound out. If you listen in a quiet environment — in a shared office space, or next to a sleeping partner, for example — an open-back headphone might be out of the question. Dan Clark’s new Stealth headphones attempt to offer the best of both worlds by combining the isolation of a closed-back design with the open and airy sound of an open-back headphone. To do this, the company used metamaterial technology to develop what they call an Acoustic Metamaterial Tuning System, or AMTS. This patent-pending technology employs a single metamaterial device that sits between the driver and the ear. It may seem counterintuitive to place something between the transducer and the ear, but Dan Clark Audio wanted to address standing waves and reflections that occur not only between the back of the driver and the ear cup, but also in the space between the front of the driver and the user’s ear. Because all sound must pass through the AMTS device before reaching the ear, DC Audio’s engineers can control exactly what sound makes it through to the other side. Clark describes the AMTS device as “a programmable array of dual-function waveguides” that integrate diffusion control with quarter-wave and Helmholtz resonators. According to Clark, “diffusion reduces some standing wave formation, while resonators act as both precision and broad filters to smooth and shape the frequency response, smoothing the sound from the midrange through the highest frequencies.” Simply put, certain frequencies are attenuated by various degrees by the AMTS, while others pass through the metamaterial unaffected. The result of this precise control over frequency response is “unprecedented high-frequency detail and clarity for the ultimate in smoothness, tone, and detail retrieval,” according to Dan Clark Audio. In a video interview with Jude Mansilla from Head-fi.org, Clark suggests that this technology could potentially be used by a third party to modify the response of other popular headphones. As Clark’s website points out, “all headphones are subject to high-frequency standing waves which can make treble sound harsh, fatiguing, or synthetic. AMTS renders high frequencies with a refreshingly smooth, accurate, and detailed delivery across all genres.” The legendary headphone engineer Axel Grell, of Sennheiser fame, was shown the technology and remarked that it “solves acoustical problems with just one part,” and that it’s “a big step ahead” for headphone design. Dan Clark Audio says that the Stealth headphone is the result of a four-year effort, and that the team had the time and resources necessary to perfect every aspect of the design. In addition to the AMTS, the other component that has the biggest effect on the headphone’s sound quality is the driver itself. The Stealth uses an all-new 4th generation planar magnetic driver, which was designed and built in-house. The new driver “delivers the smoothest, richest, and most detailed experience” yet from Dan Clark audio, according to the company. This sound comes by way of a 72mm x 50mm v-Planar driver with 15 magnets per driver. That’s the largest planar diaphragm to date in a Dan Clark headphone, and about 20% larger than the driver used in the company’s previous planar magnetic flagship, the open-back Ether 2 ($2,300). The new driver uses Dan Clark’s patented v-Planar technology, which reportedly reduces THD and improves low frequency extension, “delivering exceptional dynamics with vanishingly low distortion for a natural and ‘easy’ listen,” according to the company. The new drivers are made on an all-new tensioning system that yields more uniform and consistent tension, lower distortion, better matching between drivers, and “incredible consistency across units.” The new driver and the AMTS combine to create an all-enveloping soundstage with depth, width, imaging specificity, and an effortless sense of space that can compete with the finest open headphones, according to the company. But Are they Comfortable?

Of course, headphones aren’t only about sound. We wear them, so they have to look good and be comfortable. We also touch them and handle them far more frequently than we would a pair of loudspeakers, so they need to be robust and well-made. Here, Dan Clark went all out with the Stealth, taking its design cues from stealth aircraft, and finishing the headphone “to levels you’d expect in the finest of luxury cars.” The company’s signature nitinol headband is lightweight and practically indestructible. It’s now fitted with a quilted leather head-strap, complete with a self-adjusting suspension system that promises to seat the headphone perfectly on your head, every time, with practically zero effort or adjustment. The strap’s quilting is said to improve comfort and reduce heat buildup, while its pre-formed geometry spreads weight evenly across the head for comfortable extended listening sessions. The ear pads are made from synthetic suede and protein-leather for a pleasant touch on the skin, according to the company. The ear cups are made from aluminum and carbon fiber, delivering maximum stiffness while keeping the weight of the headphones in check. The Stealth weighs in at 415 grams, which is relatively light for a full-size planar magnetic headphone. (For comparison, the Audeze LCD-4 tips the scales at a hefty 690 grams, while the mostly-plastic Sennheiser HD-800S is a lightweight at just 329 grams.) The Stealth uses the same ingenious folding gimbal system that Dan Clark Audio first developed for the Aeon 2 headphone ($900), so it fits in a remarkably small travel case, and is therefore far more portable than other flagship-level headphones. Like all Dan Clark Audio headphones, the Stealth is built by hand in San Diego, California. Headphones at this price point are now more common than I ever thought they would be — it doesn’t seem that long ago that the Sennheiser HD650 was considered a very high-end headphone at $550. These days, even if you’re prepared to spend $4,000 or more, you have a wide variety of options. But if you want a high-end closed-back headphone that sounds like an open-back, uses cutting-edge technology, and folds into a tiny package, the Dan Clark Stealth is the only game in town.

For more information on the Dan Clark Audio Stealth, check out this video from Head-fi: