Bi-amping vs Bi-wiring: What's the Difference and is it Audible? 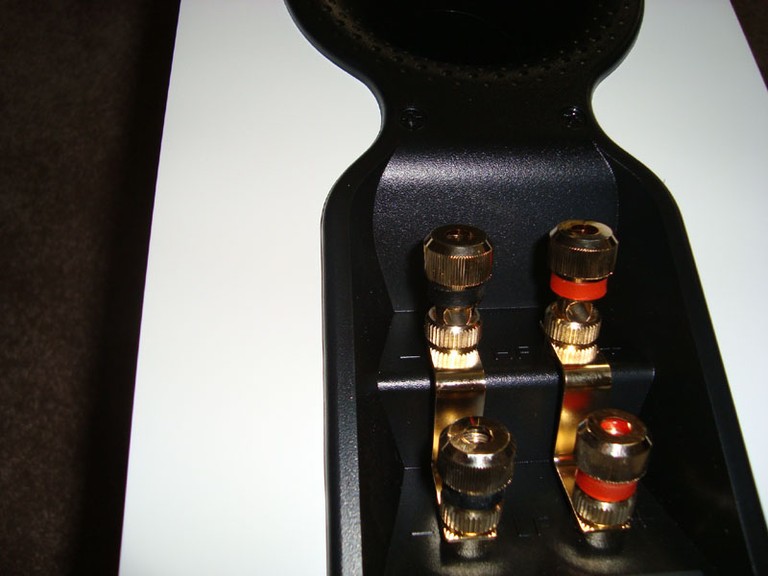 The speaker pictured here can be biwired or biamped as it boasts two pairs of binding posts.

Recently a reader of Audioholics asked us about the differences between bi-amping and bi-wiring, and what kind of effect each could have on his system. In this article,  we discuss the various forms of bi-amping, including passive vs active, vertical vs horizontal along with potential trade offs of each connection methodology.  Is bi-amping worth it?  What about bi-wiring?

Read our article and let us know how you connect your main speakers in our forum thread. Check out our recently added YouTube video(added: 3/24/15) where we discuss the differences and whether or not they are audible.

Q: I've often wondered how much sonic improvement comes with bi-wiring and/or bi-amping speakers, assuming the speakers are of high quality to begin with. I would assume that bi-amping might be a better route?

A: In a conventional wiring arrangement, a length of 2 conductor cable is run from the positive and negative terminals of an amplifier to the corresponding terminals on the rear of a loudspeaker. When a speaker has the ability to be bi-wired or bi-amped it has two pairs of terminals, and jumper straps are used to establish an electrical connection between the two pairs.

Bi-amping vs Bi-wiring: What's the difference and is it Audible??

In order to bi-wire a speaker, you need 2 separate lengths of 2 conductor cable. Both cables are connected to a single pair of terminals at the amplifier, while at the speaker end you remove the jumper straps and connect one cable to each pair of binding posts. So what difference does it make? In short: “not much”. While it is possible for bi-wiring to make a small impact in terms of changing the impedance properties of the total load seen by an amplifier, in the real world, using speaker cables of appropriate gauge (and consequently, very low resistance), the difference is practically nil. In general, our advice here is to save your money, though outside of cost, there is no harm to be done.

If you're contemplating on using a 12 AWG cable in a single cable connection vs two pairs of 12AWG cable in a bi-wire connection, go with the latter option since the overall resistance seen by the amplifier (at the crossover point of the loudspeaker) will be slightly lower.  However, you can accomplish more to reduce cable resistance simply by using both sets of 12AWG cable in wired in parallel to both speaker terminal inputs, or by using a single lower gauge cable run to your speakers. For a more in depth discussion on bi-wiring (math intensive), check out:  Bi-wiring a speaker: Does it make a difference?

It gives a break down of the slight impedance changes the amplifier will see from bi-wire vs single wire connections.

Bi-amping involves the use of two separate amplifier channels per speaker, one to connect to each pair of binding posts. From there, we get a few subdivisions: active vs passive, and horizontal vs vertical.

Active bi-amping involves the use of an active crossover which splits the electrical signal into high and low frequencies before it reaches the amplifiers, consequently allowing each channel to only reproduce the range of frequencies required of it. In terms of audible differences, ditching the passive crossover boards in your speakers for an active bi-amping setup certainly has the potential to make a change, though whether this is positive or negative depends on the quality of implementation, as well as the quality of the passive crossover you’re replacing (generally speaking, we feel it’s difficult to meaningfully improve upon a very good passive crossover). Be warned: converting a passive loudspeaker to an active model is not an undertaking for the faint of heart due to the complexity involved as well as the costs (active crossovers as well as additional amplification and wiring).

From a technical standpoint, aside from possible improvements afforded by active crossovers, active bi-amping allows an amplifier to be directly coupled with a driver, having it to deal with a much more benign load than what a typical passive loudspeaker represents. This can also result in a more efficient system given that no energy is wasted as heat in passive crossover components. Intermodulation distortion in the amplifiers is reduced given that each amplifier channel is reproducing a smaller portion of the audio spectrum, and the split load also dramatically reduces the likelihood of tweeter destruction as a result of overdriving an amplifier. Last but not least, active bi-amping allows for a more efficient allocation of power, i.e. it’s possible to place a smaller amplifier on a relatively sensitive tweeter, and reserve the 1000W monster for the power hungry woofers. Passive bi-amping utilizes the passive crossovers built into the speakers, with each amplifier channel reproducing a full range signal to drive separate high and low frequency networks. Relative to active bi-amping, the benefits of passive bi-amping are much less pronounced (you might hear the derogatory term of “fool’s bi-amping” applied). Nonetheless, splitting the high and low frequency networks does have some effect, as the amplifiers each now see a different load than one would under normal circumstances when individually driving the entire speaker. Generally speaking, the individual networks are designed such that “out of band” frequencies will have a very high impedance relative to the expected pass band of the driver(s), and consequently will demand significantly less actual power from the amplifier at those out of band frequencies.

Because of this split, there are a couple practical advantages. Potential output ability is increased as there is little power wasted reproducing those aforementioned “out of band” frequencies. As with active bi-amping, the possibility of tweeter burnout due to amplifier overload is also reduced. However, in terms of basic audible differences, there’s not much to write home about, and what improvements do exist could typically be gained by simply utilizing a single more powerful amplifier with similar or better performance metrics than the two smaller amplifiers. Note: It's important to utilize amplifiers with similar gain structures to ensure  level matching between the low and high frequency sections of the speaker system for proper integration. So we leave off with the question is bi-wiring or bi-amping audibly better than a single cable or single amp connection?  As we previously discussed bi-wiring audible benefits are usually negligible assuming you've already started out with a low gauge speaker cable to begin with.  Bi-amping can offer an improvement in sonics, and dynamics depending on the equipment  and implementation.  However, when dealing with very top shelf amplification and loudspeaker components and crossovers, a single amp, passive speaker connection can still offer incredible fidelity often equaling or rivaling similar active alternatives.

So how do you connect your main front left/right speakers in your system?  Let us know in the related forum discussion thread.  Post images too!

Some images in this article were sourced/derived from content at http://www.audiomisc.co.uk

Yeah, that's myth when people say that simply adding a more powerful amp or much more expensive amp will make the bass in your speakers “tighter” or “punchier” or somehow better.

I saw a so-called review of one amp recently:

"the SET 400 threads the needle with an overall neutrality, yet has a touch of warmth to boot. Never artificially fluffing up the sound, it manages the deft feat of taking harsh recordings and making them far more enjoyable. Even when pushed, the amp seems almost tube-like in its ability to create fatigue-free music which results in long, couch-locked listening sessions…String instruments maintain their dimension, bass notes carry with appropriate authority, and percussion features a punchy strike combined with fluid decay.
Bass proves another strong suit. The AVA’s high power reserve gets a grip on speaker drivers and refuses to let go. Bass guitar plucks reverberate with realistic tightness, followed by a decay with a palpable presence."

No. I don't believe a higher power amplifier will give you better bass. More likely you either need different placement of the RF7IIIs to mitigate so-called “suck-outs” in the listening seat frequency response, or you need to add one or more subwoofers, placed for smoothest bass response.
DigitalD posts on July 17, 2019 12:23

Irvrobinson, post: 1327087, member: 6847
Speaker break-in is a myth. With those speakers and an Outlaw 7000x it is unlikely you will receive any benefit all, unless you have a huge room and listen to very bass-heavy music at high volumes.

So I basically need a higher powered amp to see a benefit/increased bass?
Post Reply