Bi-Wiring A Loudspeaker: Does it Make a Difference? 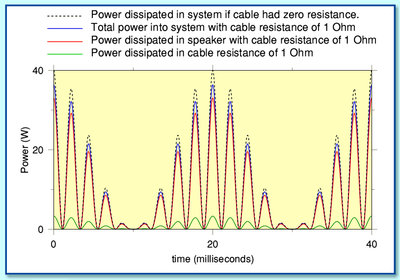 “Bi-wiring” is a controversial topic. Some people are quite certain it makes an audible difference. Some others are convinced that it can’t actually make any difference at all. The purpose of this analysis is to try and decide whether it is at least theoretically feasible that bi-wiring can make any difference.

To define what is meant by “bi-wiring”, and understand what effects it may (or may not) have, we can start by considering the situation illustrated in Figure 1. This  shows an amplifier connected to a loudspeaker by a standard cable made from a pair of connecting wires. For clarity, only one channel of a stereo pair is shown. The loudspeaker consists of two drive units. – a high-frequency (HF) unit often called a “tweeter”, and a low frequency (LF) unit often called a “woofer”. Loudspeakers generally employ a “cross-over network” to direct low signal frequencies to the woofer, and high frequencies to the tweeter. In the example shown here this network is split into distinct HF and LF sections. This split permits the loudspeaker to be bi-wired. (Not all loudspeaker cross-over arrangements will permit this without modification.) In practice, as shown here, loudspeakers designed to permit bi-wiring have extra sets of input terminals which may be joined together when bi-wiring is not employed.

In the conventional wiring arrangement shown in Figure 1, the HF and LF input terminals are wired together in parallel at the speaker, and just one pair of connecting wires are employed to link both speaker units to the amplifier. In most cases “bi-wiring” means using an extra pair of connecting wires (i.e. another cable) so that the signals for the tweeter and woofer are sent from the amplifier to the speaker by separate routes. This bi-wiring arrangement is illustrated in Figure 2. In this new arrangement, Cable 1 carries the signals destined for the tweeter, and Cable 2 carries the signals destined for the woofer. Various arguments have been presented for this bi-wiring arrangement by adherents who feel it alters the sound. For example, it may be claimed that each of the two cables may now be optimised in some way for the limited range of signal frequencies it now carries, and hence act more effectively. Alternatively, it is sometimes claimed that separating the signals for the tweeter and woofer means they do not now ‘interfere’ in some manner which may arise when they share the same cable. Unfortunately, these claims are generally unclear in technical terms, and there is a general lack of any reliable analysis or measured data to support the claims. This makes it questionable whether the claims are justified. It is also unclear whether the alternative arrangement in Figure 3 might also be “better” than the conventional arrangement. The arrangement in Figure 3 is also bi-wired, but the pairs of wires are now joined at both ends of the signal connection from amplifier to loudspeaker. In the modified arrangement shown in Figure 3 both cables are used “in parallel” to connect signals to both speaker units. The question now becomes, “Are the arrangements shown in Figures 1, 2, and 3, all going to produce exactly the same results in use?”

Detailed analysis of the three arrangements is made difficult by two factors. Firstly, the electrical properties of the items involved can be quite complicated. The networks used in loudspeaker crossovers may contain a number of components and have a complex behaviour. Similarly for the actual speaker units. As we have seen on the webpages on cables, even the behaviour of simple twin-feed connecting cable can be more complicated that we might expect.

The second problem for a precise analysis is that the actual details of the loudspeaker crossover, etc, will vary a great deal from one model of loudspeaker to another. Hence we can expect any results to depend upon the choice of loudspeaker, cable, etc.

To make understanding these questions easier we can address a simpler question – i.e. we can ask, “Is is possible for the changes between the arrangements in Figures 1 - 3 to make any difference, or not?” To answer this question we need only look at a simplified example. If, in that example, a difference can be show to be possible, then it implies that a difference may appear even in more complicated arrangements. If no such difference is shown, this does not necessarily resolve the real issue, but at least we have progressed part of the way to a better understanding. With the above in mind we can now form a electronic models of the above arrangements, simplify them as far as seems reasonable, then compare their computed behaviours.

Read the Complete Thread
joeren223 posts on May 04, 2020 08:04
The equations were not visible on my iPad browser but I understood the article I’ve tried bi-wiring, in the past and found that I was unable to hear any difference in sound quality. Assuming that he speaker wire is purely resistance is very over simplification. The amplifier will ”see” the added bi-wire as twice the capacitance. In long runs this would cause some slight filtering. Weather or not it would be audible remains debatable.
snardvaark posts on July 29, 2019 04:25
Back in the 90's, isolation of the woofer's back-EMF was the stated primary reason for bi-wiring. Ostensibly, an amplifier with sufficiently high damping factor could “absorb” the voltage generated by the movement of the woofer motor and thus prevent it from affecting the linearity of the speaker's internal crossover network.
Rick Royce posts on April 11, 2011 06:43
Stumbling on the Bi-wire technicalities

I outmost admire scientific approaches, in favour of subjective thoughts/evaluations, since the former tends to be black or white/right or wrong (and verifiable to the ambitious people how have the interest, skills and time for this)

A prudently simplified scientific reasoning that makes the results available and understandable to the wide masses, without compromising the scientific validity, is true art to me.

However, I am not following Mr Lesurf approach this time.

1. On the “single cable” arrangement the calculation is made based on a single run of cable. However, on the bi-wired arrangement the calculation is based on double runs of cable. This in itself is causing rudimentary circuit differences due to reduced cable resistance, which has little or nothing to do with the impact of the bi-wire arrangement. A comparison between the bi-wire confirguration and the figure 3. called parallel bi-wire (which is in fact nothing more than double cables in normal configuration) would have been much more scientifically interesting and appropriate.

2. The complete reasoning also neglects the impact of cable inductance. This is likely not a prudent assumption in this situation since inductance is rather dependant on wire gauge. Bi-wiring will double the effective resistance and significantly increase the inductance, as seen by the amplifier, compared to a single wire arrangement using the effective total gauge of the bi-wire cable.

3. Finally I think it is a awfully complex reasoning to prove that reducing the cable resistance by half will have an at least theoretical impact (additionally without knowing it due to the muddled reasoning)


Personally I find this article Why bi-wiring has no benefits more of an understandable read about the impact of bi-wiring. Although perhaps not the final say on this subject, it gives a good introduction and debunks some of the most notoriously proposed bi-wire benefits.
dlorde posts on April 11, 2007 07:16
DBT is not necessarily to do with seeing anything, it's an experimental protocol where neither the test subject nor the test administrator know which item is being tested - they both don't know, hence Double Blind…
mtrycrafts posts on March 31, 2007 17:34

jneutron, post: 259487
I am not confident dbt's are designed to find them accurately if they did exist,
Cheers, John

I am just not sure why one would need to see what is happening to be able to differentiate between two sounds, or image shifts or anything, knowing that another sense, in this case sight, could mislead?
Post Reply