AV Receivers vs. Separates: Which One Is Better? 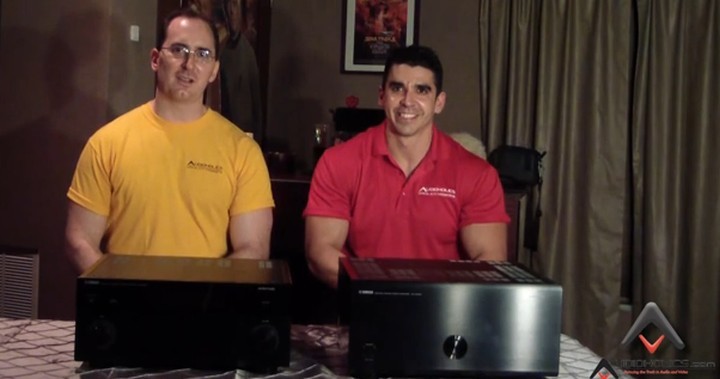 If you’ve ever spent any time browsing the Audioholics forums, the odds are good you’ve run into a discussion regarding the relative benefits of A/V receivers and separates. This matchup has proponents and valid arguments on both sides of the table. Long story short: we’d opine that both sides are right (and wrong).

Before we get too deep, first let’s understand the difference between receivers and separates. Right off the bat, AV receivers have a couple big advantages: given that everything is in one box, receivers require less real estate and setup. Receivers are also substantially cheaper, partly due to fewer redundant parts, as well as simple economies of scale (the number of receivers produced annually dwarfs that of separate preamplifier/processors and amplifiers). In addition, for those looking for the latest and greatest features, the annual release cycle for AV receivers ensures that you’ll have the most current technology, at least for a little while. By contrast, many preamplifier/processors are put out by smaller companies with release cycles as long as 5-6 years, meaning it could be a while until that killer feature you’re after becomes available.

The Denon AVR-X4000, a modern receiver with all the trimmings.

So what do separates bring to the party? First and foremost, power. While you’re not likely to find many A/V receivers delivering significantly more than 100W per channel into an 8 ohm load, it’s possible to find monoblock (single channel) amplifiers that can deliver 1,000W into 8 ohms. If you have 4 ohm speakers, the situation tends to favor a separate amplifier even more, as many AV receivers (particularly budget models) tend to choke driving low impedance loudspeakers at high levels. In terms of audio quality, you’ll also find some separate components offer balanced inputs/outputs for improved noise immunity, as well as fully differential circuits, which help to further reduce distortion. Beyond raw performance, there is also the matter of aesthetics, build quality, and fit and finish. As mentioned previously, separates are typically expensive; as such, a lot of manufacturers embrace the high end role, delivering elegantly machined components with top quality internals that you’re not going to find on the more pedestrian receiver.

While the above categorizes the situation fairly well, there are a few caveats worth mentioning. The first is a matter of technology. In the last couple of decades, we’ve seen a lot of change, with the introduction of Dolby Digital and DTS formats, and their evolution into high definition audio formats, i.e. Dolby TrueHD and DTS-HD Master, as well as the wide scale rollout of high definition video (including 3D and 4K pass-through). At the moment however, there’s arguably a bit of a lull in major innovations. Simply put: a preamplifier/processor with the above features isn’t likely to become obsolete in the near future. There are of course minor improvements: many AV receivers offer bells and whistles like music streaming services (i.e. Pandora, Spotify, etc), but generally speaking these are features that can be added on via a Blu-ray player or Smart TV, as opposed to major deal breakers like a lack of HDMI inputs.

Then there’s also the matter of practicality with respect to power. Realistically, many people don’t have much use for 1kW monoblock amplifiers; the amps built into a run of the mill A/V receiver might be enough. Adding a bit of fuel to the fire, a lot of midline and high end receivers offer preamplifier outputs, meaning you can still add a separate amplifier if you find yourself needing more juice down the line. Many enthusiasts utilize this option, as you get the full benefits of big power and the regular release cycle of receivers (which still tend to be cheaper than a high end preamplifier/processor). In this case, note that it’s still important to ensure that your receiver’s preamplifier outputs can effectively drive the amplifier you’re looking at (Audioholics does measure this when applicable in our A/V receiver reviews); output of 2Vrms is usually adequate to drive the majority of amplifiers to full power, though some models may require more (you’ll find the voltage needed under the amplifier’s input sensitivity specification).

Check our our article on Amplifier Voltage Gain for further details.

Rear panel of the Denon AVR-X4000 with the preamplifier outputs highlighted.

Contemplating purchasing an AV receiver against a separates setup? Both can be valid choices depending on what you’re looking for. Inexpensive, easy to set up, and requiring relatively little space, AV receivers are the popular choice. Conversely, if cost takes a back seat to power, build quality, and the best possible audio courtesy of balanced interconnects and fully differential circuitry, separates are for you. And of course for those unwilling to commit to either paradigm, there is the choice of mating an AV receiver with preamplifier outputs to a high powered separate amplifier, getting some of the perks from both worlds.

So now the question is: are you using a receiver or separates, and what do you prefer?  Please tell us in the dedicated forum link below.

The 5308 had the HDMI board replaced while under warranty. But it was never used much since I bought the AVP-A1HD shortly after the 5308.

I should NOT have said the AVP-A1 was low quality. I should have said “High quality, but not DESIGNED to LAST”.

I guess there is a difference between quality vs design. Like you said, if they were designed to only last 10 years, then I guess we can’t expect it to last 20 years. But they can be built with high quality. I thought it was designed to last 20YR. So I take back what I said there.

The main thought behind my post is that a 20 year life with any modern AVR is probably not realistic. Much more likely if you go back to the feature level of the 5308 (I have not heard of HDMI failures being routine on them, although I am sure your's was not the only one). And 20 years is totally viable if you go back to simple analog stereo receivers (which were not taxed by poorly matched low impedance inefficient speakers)!

I have a Yamaha R-S700 that would not surprise me if it lasted 20 years (only analog inputs). Of course, it can be argued that this unit was obsolete before I bought it! Seems like they had a R-S300, R-S500, and the R-S700. I kind of wish they had kept at least one of these in production just to have a reasonably priced long-life unit, but I certainly can't blame Yamaha for adding digital/optical and network/BT/musiccast capabilities. Those two additions may not add that much heat or reduced cooling, but in the process, they are pulling from the AVR parts bins which are no longer designed with the expectation of lasting 20+ years. (and I certainly don't know that my R-S700 did not come mostly out of the AVR parts bin)

But, I'm sure the manufacturers have done their homework. If we go back 20 years, I think we would be missing HDMI, networking, wi-fi, Heos/MusicCast/Airplay, and BT.
I don't really know the history of AVRs, but I might guess the following are also developments of the last two decades: Auto setup for level matching & distance/delay, PEQ, bass management (mainly proper crossover in the AVR), and RoomEQ.
Most recently, for me, the D&M app for Audyssey is a fairly compelling reason to upgrade!

You could argue the necessity for any one of these features, but taken as a group, I think after close to 10 years most people are going to feel like they would like to upgrade and they are not going to be overly upset if a failure of the unit helps drive that decision.

KEW, post: 1417924, member: 41838
Good luck with that!
If I understood @M Code correctly, all modern mainstream AVR manufacturers are designing with a service life of around 10 years - including Yamaha! Yamaha may still have better reliability, but I don't believe you can expect 20 years any longer!

How old was your Denon AVR 5308 (?) when you sold it? that was before the decision to design for a shorter service life, IIRC!


Have you heard any good explanation on why this unit was so poor? I have to believe that since Denon discontinued it and no other company has dared to make the equivalent that Denon (and other companies that analyzed it) discovered some reason not attempt to match/improve it!

I sold the 5308 about 2 months ago. But it was never used that much. It was kept in storage the whole time I was using the AVP-A1HD.

The 5308 had the HDMI board replaced while under warranty. But it was never used much since I bought the AVP-A1HD shortly after the 5308.

I should NOT have said the AVP-A1 was low quality. I should have said “High quality, but not DESIGNED to LAST”.

I guess there is a difference between quality vs design. Like you said, if they were designed to only last 10 years, then I guess we can’t expect it to last 20 years. But they can be built with high quality. I thought it was designed to last 20YR. So I take back what I said there.

This is my sentiment also, but ONLY for the part of the market that buys long terms. I'm one of those. My amp is mid 90' and I don't really want to change (although deox is needed). So that's 20 years+

OTOH, how to defend this position if most of the people plan to change when enough new technology is implemented? You change your perfectly good and working AVR with no HDMI for the one that has HDMI, only to have it changed for a 4K one later on.
Post Reply