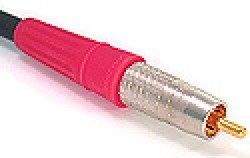 In discussing the characteristics and performance of various interconnect systems; two points should be kept in mind.

A small, common-mode, 60 Hz noise, voltage can exist between the chassis of two AC powered devices regardless of whether they are safety grounded (use a three-wire plug) or not.

An unbalanced (single ended) interface uses only two conductors to carry the signal from one device to another, one conductor carries the signal and the other is the grounded return. In consumer audio systems this usually consists of a cable with a center conductor and a shield terminated in an RCA Phono plug.

The ubiquitous "RCA Phono" plug was developed by RCA over fifty years ago to be used for short interconnections between a turntable and amplifier inside a phonograph, hence its name. This unbalanced interconnect system is simple and inexpensive, but as with many other connector systems has been adopted for uses other than originally intended and has become the de-facto connector for consumer audio/video equipment. Note, however, that the design was original intended only for short cable runs within the same piece of equipment. Being an unbalanced system it is susceptible to common-mode noise voltages.

A problem occurs when there is a ground voltage (common-mode voltage) between the two interconnected devices. Because of this voltage, a small current will flow down the cable shield between the devices (often referred to as common-mode current, or as a ground loop current). If the cable shield were ideal (zero impedance) this current would not cause a problem. However, since the shield has a finite resistance, a small noise voltage will appear across the length of the cable shield. The magnitude of this voltage will equal the common-mode current times the shield resistance. This voltage is in series with the signal voltage and will add directly to it at the receiver. In other words, an unbalanced interconnect system consisting of only two conductors (center conductor plus a shield) has no ability to reject common-mode noise voltages.

This coupling is referred to as common-impedance coupling , and is the result of the fact that in an unbalanced two-wire system the shield is performing two functions. It is a shield carrying the common-mode noise current, but it is also one of the signal conductors carrying the return signal current.

Example 1: Let's consider a typical case of the interface between two grounded (3-prong AC plug) pieces of audio equipment. Some actual cases will be better than this example and some will be worse. The shield resistance of a fifteen-foot cable might be about 0.25 ohms. If the 60-Hertz shield current is 250 uA, the voltage developed across the shield will be 62.5 uV. For consumer audio products the reference signal level is about 300 mV (-10 dBV). The signal to noise ratio will therefore be 74 dB. For a high quality consumer audio system we would probably like the S/N ratio to be greater than 100 dB. Therefore, we would most likely be able to hear some 60-Hertz hum in quiet passages of the program material.

You might conclude at this point that ungrounded equipment, those using a 2-prong AC plug, might solve this problem by eliminating the ground connections. This often helps, but does not necessarily eliminate the problem. For ungrounded equipment the common-mode ground current can still flow through the inter-winding capacitance of the power transformer. The impedance of the capacitor will normally reduce the magnitude of the current (typically less than 100 uA), and hence the noise voltage, but some noise will still exist. Since the impedance of the inter-winding capacitance is frequency dependent, more current will flow at high frequencies (harmonics of 60 Hz) than at the fundamental frequency (60 Hz). Therefore, the interference will more likely consist of a high frequency buzz instead of a 60 Hz hum.

Despite its shortcomings, this unbalanced system works surprisingly well most of the time. In particular, in cases with short cable runs, and with very little, or no, 60 Hz voltage between the chassis of the interconnected devices.

From the above discussion, we can conclude that for the case of an unbalanced interface, the only property of the cable that has any significant effect on the common-impedance noise coupling is the shield resistance.

What can we do to minimize the possibility of problems when using this very common unbalanced interconnect system? First, we want to minimize the common-mode voltage difference between the interconnected devices. If possible, plug everything into the same AC power outlet, or power strip. If that is not possible plug the interconnected equipment into power outlets that are on the same branch circuit (same circuit breaker). Another possibility would be to run an additional heavy gauge (low resistance) ground wire between the chassis of the two devices to divert some of the common-mode cable shield current.

Thirdly, you can isolate or break the common-mode shield current path. Most people try to do this by removing or lifting grounds on the AC power cord. This can be very dangerous since it can lead to safety problems. The AC power cords and connections should be left alone, exactly as the manufacturer designed them. It is much better, and safer, to do the isolation on the interconnecting signal cables.

Another approach would have been for the manufacturer to design the product with a balanced interface.