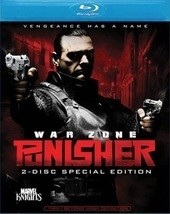 The Punisher has been played by three actors now: First Dolph Lundgren in the campy 80s Punisher movie. Then Thomas Jane gave us a brooding Punisher in 2004. It’s my opinion that the best Punisher was saved ‘til last. Ray Stevenson is a Punisher like no other – and Lexi Alexander gives us the look and feel that is just right for the material. The 2008 film didn’t exactly set records at the box-office, but nobody expected it to. But like the 2004 film, this version might just find its true following on home video. You won’t find a better representation of this gritty, violent action thriller than this two-disc set on Blu-ray.

This film is very true to the look and feel of the Punisher comics. But what its name might suggest it’s not really the Punisher: War Zone series, instead it’s more what you see in the Punisher Max series written by Garth Ennis. This is a brutally violent movie. It’s a crossing a slasher flick, gritty film noir and Deathwish. Ray Stevenson’s Punisher doesn’t just shoot the bad guys, he literally blows their heads clean off and you’re spared none of the gory details. It’s got the kind of visuals that might have felt at home in the latest installment of the Rambo series. If you’re looking for a film for a family movie night, look elsewhere. This is a late-night, adults only thriller.

But step outside the blood and gore and you’ll see an esthetic in its minimalist visual style thanks to director Lexi Alexander. She wanted the movie to looks like the Max comics that often stripped down the number of colors used in each frame to impart a gritty, shadowy feel.

The supporting characters are a curious lot. The antagonist is one of the

classic arch enemies – Jigsaw. We get to see how Jigsaw gets his namesake and one very bad potential side-effect of recycling. Fortunately we’re not taken through a retread of the Punisher’s painful origin story. This Punisher doesn’t follow continuity of the Thomas Jane movie. Where Jane’s Punisher was modernized here were back to Punisher being an ex-Marine veteran. Another main character is Microchip. He’ll be recognized by anyone who ever read the comics as Punisher’s ever popular techie assistant. He only lasted a short run of one of the comic series but he fits here if nothing else to give Punisher someone to talk to.

Punisher: War Zone opens with a brutal gun battle where Stevenson shows us a Punisher that handles weapons and can clear a room as naturally as most of us breathe. The actor endured grueling training with the US Marines and Army Recon weapons specialists not to mention hand to hand mixed martial artists to make the on-screen action look so real. The film deftly propels across the story with terrific pacing for an action film. It takes the source material very seriously giving us realistically brutal and gut wrenching action. But the film manages to give us some lighter moments especially at the expense of some of its insane villains.

As noted earlier the film is mostly dark and gritty. Colors are sparse and shadowy. The effect is perfect for Blu-ray. One scene will show us cooler bluish hues, the next will take on a greenish pallor and then red is often used for very violent scenes. The lack of color fits the story very well and the deep black levels are well represented here. But the transfer isn’t perfect. Because its mainly shadowy, indoors and lacking in bright color this won’t be one of the films you’ll use to demo Blu-ray video.

There’s also a sheen of graininess often present in film. Some of the best Blu-ray transfers have managed to clean this up, but not here. But War Zone remains free of compression artifacts and digital noise. Some might feel the grainy film-look suits the material as I did.

This film’s soundtrack is as aggressive as visuals are violent. This movie will literally take an arsenal to every channel in your speaker system. It’s a real test of your surrounds and will work your LFE like nothing else. Subtle it ain’t! But at the same time the guns never sounded over-the-top. It seemed as if the soundtrack was concerned with portraying fairly realistic sound-effects with the individual weapons. Bullets will blast from your LFE and ricochet off your surrounds. Dialogue was always crystal clear and articulate.

you might want to pack this Blu-ray disc in your library to demo your system’s ability to present a loud and aggressive DTS-HD Master Audio soundtrack – it won’t disappoint.

Audio Commentary by Director Lexi Alexander and Cinematographer Steve Gainer: I was surprised to hear a female voice when Lexi Alexander spoke. To tell the truth I wasn’t familiar with her work or her name but I am completely impressed. It’s a typical commentary with lots of behind-the-scenes anecdotes. You’ll get to hear a lot of the challenges faced by the cast and crew during the shooting of various scenes. It doesn’t rank among the most compelling commentaries I’ve heard.

Training to Become The Punisher: (HD 5:47) This short documentary takes you through Stevenson’s grueling training with military weapons, operations and combat experts. There is a lot of overlap here between the other short documentaries. But it’s fascinating to see how much work went into making every aspect of the action painstakingly realistic.

The Weapons of the Punisher: (HD 4:39) It’s interesting how different factions in the film used different weapon sets. You’ll see not only the weapons used by Punisher himself but how different gangs had preferences for different types of weapons. Just part of how over-the-top realistic the film tried to be.

Meet Jigsaw: Actor Dominic West endured hours of make-up sessions to look like the cut-up Jigsaw. Yet he still managed to keep his sense of humor about him and give us one of the most maniacal villains in film.

Creating the Look of The Punisher: (HD 2:46) Very short feature explains the colors used in different scenes. As mentioned above it’s an interesting perspective of the story.

MoLog: This one is for you BD-Live users with a capable disc player or PS3. Download the app then register online and apparently you can insert your own content into the film as well as create blogs and share with other registered users on MoLog – yippee!

Other Features: Punisher: War Zone theatrical trailer and other trailers from Lionsgate round out the special features.

If you’re a fan of action cinema I highly recommend giving this movie at the very least a rent. You’ll especially like this if you can handle a bit of gore and brutal violence with your action and appreciate the dark tone. But as mentioned earlier, the film isn’t without its lighter moment – after all Punisher has always had a soft spot for kids.

As a comic fan, especially a Punisher fan it appeals to my inner purist. I’m never one to take it personally when writers and directors take liberties with my favorite comic stories, but only when the end result is good. But this film is as close to Garth Ennis’s Punisher Max series as you’ll see on film. Ray Stevenson was born to play the Punisher and I hope they continue to make a ton of sequels staring Stevenson.

Read the Complete Thread
romantic posts on May 02, 2009 08:40
i watched it already but i just stop watching it after 1/3 and chat with my friend instead
Mosimo posts on April 01, 2009 12:11
Thanks for the review, didn't know it was out already. Will probably rent it.
alexwakelin posts on March 30, 2009 19:34
I thought it was worth watching, netflix sent me my copy and I saw it Friday night. Good use of surrounds and strong LFE throughout the movie. I still think the 2004 version might be better. Did anyone else notice that the audio track seemed louder then most blu-rays? I had my receiver turned up about 75% of my normal movie watching level for this disk.
Buckeye_Nut posts on March 30, 2009 18:33
I LOVED the “Punisher” with Travolta and Thomas Jane. I own my own copy and have probably watched it 7+ times.


I hated the newest incarnation……..I didn't even watch the finish. I probably watched about 1/2 to 2/3 and couldn't tolerate any more. I'm an easy critic too!! I rarely don't make it to the end of a movie.
GlocksRock posts on March 23, 2009 09:05
Lots of use of the surrounds in this movie, but I didn't really care for it all that much, but I have seen worse films.
Post Reply