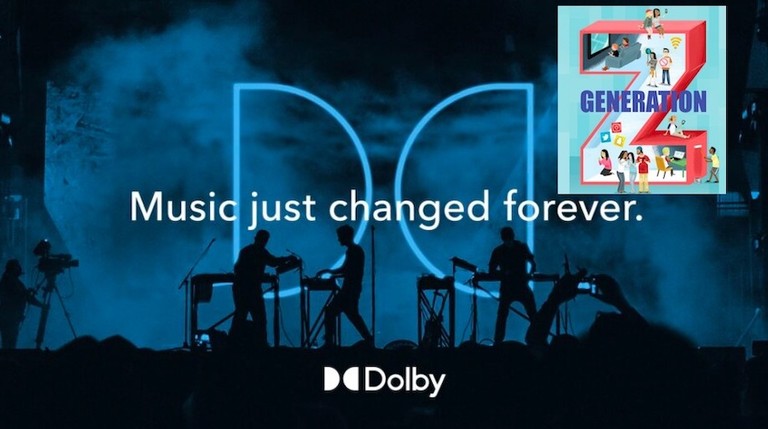 IN A WORLD WHERE… sound quality has been crushed beneath the hegemony of convenience and scale as young music fans learned to prefer the tinny tones of compression and exaggerated recording levels, while dynamic range and fidelity become distant memories. Into this dystopian world where secret societies of old folks and hipsters clutch tightly their vinyl records and boutique turntables comes… The Survey! It started with a few Dolby Labs executives who needed empirical justification for investment into Atmos Music, The Survey revealed a new generation that actually cares about good sound: GenZ! This new generation, against all odds would defy the status quo and demand great sound, and are ready to pay for it. The Survey further revealed that many of these young, budding audiophiles are liable to know what a Led Zeppelin is, and may even unironically wear a Nirvana t-shirt while actually listening to a few of their songs. The Survey’s revelations brought smiles to the secret societies of old men with vinyl, and the hipsters found something else to criticize.

Dolby Labs just announced the results of an interesting OnePoll survey of American adults (18+) who listen to at least an hour of music each day. The survey pried into the minds of music fans for a closer look into trends when it comes to how we listen to music in 2021 and the results appear positive for those of us who love sound quality. Although the survey was cross-generational, some of the most surprising findings pertain to today’s youngest adults, the so-called GenZ. It appears that GenZ may share our Audioholic enthusiasm not only for sound quality, but also the music of past decades.

It’s no secret that the outlook for the future of sound quality over digital convenience has been bleak since the early years of digital media. iPods and pirated MP3s that became all the rage in the early 2000s may have presented obvious advantages to music lovers, but sound quality was not one of them.

For the Millennial generation, good sound was a low priority when they were expanding their musical horizons with bit-torrents, Napster, and the occasional low-bit, DRM-infused AAC file purchased legally from Apple Music. Music media and hardware trends through the 2010s created a consumer-audio environment that left little incentive for manufacturers and platforms to elevate their high-fidelity game. At least one study we covered in ‘09 showed that many Millennials even preferred the sound of hyper-compressed digital formats. That study from just over a decade ago only confirmed our suspicions, as we’d already endured the Dumbing Down of Audio, as digital formats like CD used source material that had been recorded at ever-escalating volumes in the so-called Loudness War. All of these trends together gave us GenXers and our Boomer elders a lot to complain about during digital music’s early years. High-resolution/multi-channel formats like DVD-Audio and SACD withered away as consumer preference for scale-over-sound-quality dominated music. And don’t even get anyone with a little gray around the temples started about popular music over the last decade!

But this new Dolby survey offers a ray of hope, it seems the times they are a changin! A generational shift appears underway, just as Millennials are being supplanted by GenZ as the youngest adults. This new generation seems to have more in common with older generation’s music-listening behaviors. According to the survey, today’s youngest adults could be driving consumer preference in favor of lossless sound quality, high-quality audio devices and even older music created in decades past.

Nostalgia for Music of the Past

According to the survey, there’s plenty of cross-generational nostalgia in the air. While older adults are rediscovering the music of their youth, many young adults of GenZ are adopting a preference for the iconic bands of the past. While 6-in-10 respondents overall reported feeling like they were born in the wrong era due to their taste in music, but this number jumped to 80% for GenZ. And honestly, who can blame them? Perhaps some of these younger folks can one-day choose to identify as Boomers. Almost half of respondents overall report discovering songs released over a decade ago, but this behavior was highest, again among GenZ at 70%. The survey also determined that social media and Hollywood movies are the top methods of musical discovery. YouTube takes the undisputed top-spot with 79% of respondents overall discovering music on Google’s video platform, with Facebook, Instagram and TikTok pulling up the rear. Recommendations from friends on social media may provide a personal connection to a song, depending on who in your Friends list is making the recommendation. But music discovery through Hollywood should be no surprise as movies have the unique ability to completely recontextualize a song in its soundtrack and sometimes even put old songs back into the pop-charts. Nobody who saw Wayne’s World will ever hear Queen’s Bohemian Rhapsody the same way again. It turns out that almost a quarter of respondents that discovered a song from past decades did so from a movie or show.

The year 2021 may go down in history as the year of lossless. Both Spotify and Apple Music brought the option to listeners this year and it’s probably a safe bet that any audio platform not already streaming lossless is going to be perceived as second-class.

The Dolby Labs survey may have served to justify investment into its Dolby Atmos Music division, it's good marketing to get more adoption. But that should be a good thing overall, no matter how you feel personally about listening to another "surround" music format. Even if you’re not crazy about Apple’s Spatial Audio effect (Apple’s branded Atmos Music), it’s ultimately just another choice and doesn’t replace a lossless two-channel option. It's generally a good thing to see research into audio technology with the goal of better sound, as long as it doesn't detract from what's already available. The very act of sitting, closing your eyes and listening has unfortunately become an underserved aspect of audio technology in consumer electronics. For the past couple of decades, much of the industry seemed to want us to believe that quantity is better than quality. Fortunately, this may be changing and if Dolby Labs’ survey is any indication, electronics manufacturers and platforms have every incentive to serve a growing niche that cares about good sound.

Among respondents who pay for a streaming music service, a resounding 90% said that enhanced audio quality is a “must have” feature. Among the must-haves, 82% said they have upgraded or changed services for one with better sound quality. The desire for sound quality was highest among GenZ. Nearly half of surveyed GenZ said they demanded the latest “cutting edge” audio technology with their streaming music plans, which is certainly good news for Dolby Labs. The survey had some good news for consumer electronics manufacturers too, 86% of GenZ respondents said they’re likely to purchase a new audio device in the next six months to get better audio sound quality for music-listening.

Over the last 20 years digital audio has been dumbed down with loudness wars and over-compression and overall consumer responses offered little demand to improve. Perhaps the first sign of backlash against these trends was the rise in popularity of vinyl. We’ll steer clear of the age-old analog vs digital debate here, but we’ve always known that digital audio is capable of so much better than the 128-bit MP3 that threatened to become the de-facto standard in how a song was released to the public. But, the trend seems to be moving in a higher-fidelity direction and that’s a hopeful sign that should be music to our ears.

Read the Complete Thread
VonMagnum posts on February 16, 2022 20:45
I was with the article until the bit about occasional “low bitrate” iTunes song purchase. 256kbps AAC is nearly 100% transparent in every double blind test thrown at it. And while Apple headphones and earbuds are highly questionable, the quest for “lossless” music online is one of the least rewarding for that reason. It speaks more to Stereophile hysterical nonsense than an actual question of high fidelity. Moreover, Dolby Atmos streaming won't save you if that's what you believe becauseit is most certainly NOT LOSSLESS in Apple Music. You must buy honest to goodness Blu-rays if you want lossless Atmos audio.

Sadly, the industry wants physical media to die a swift death as they have no control over you with physical media (the real reason to buy it). If they want to change the lyrics to some woke nonsense or ban albums entirely they can't do it while physical media exists! They can wipe music or replace it with a “remastered” version from your flipping RENTAL subscription any time time they feel like it. Welcome to the dystopian future of your dreams (or nightmares).
eljr posts on January 19, 2022 17:08

gene, post: 1528279, member: 4348
IN A WORLD WHERE - sound quality has been crushed beneath the hegemony of convenience and scale, young music fans learned to actually prefer the tinny tones of compression and exaggerated recording levels while dynamic range and fidelity became distant memories. Into this dystopian world where secret societies of old folks and hipsters clutch tightly their vinyl records and boutique turntables comes… The Survey! The Dolby Labs' survey could be a game changer for the future of consumer audio. Let's see what new market-intel uncovered by Dolby Labs could tell us about the future of audio.

it's but a handful

It's not an generation. Just a few who think it's cool as a point of differentiation.
Old-Timer posts on January 07, 2022 18:53
From my own personal experience, I think that vinyl has a lot to do with the resurgence of quality audio. I remember playing some music for my sons (music which they had already experienced in low-bit MP3's), and their response was overwhelming. Things like, “So big”, “So clear”, and “I never knew those instruments were even in there” were their unsolicited reactions. I believe that, given a choice, they would all choose lossless formats. I also believe that too many are unaware of the alternative.
Trebdp83 posts on December 31, 2021 15:35
I hope they get it going soon. It’s the one service I haven’t tried because they haven’t turned on HIFI. Apple Music is a mess and not too far off from Tidal. Lossless and Atmos are fine for the most part on both services, but requiring external DACs for Hi-Res on Apple and MQA supported devices for Hi-Res on Tidal is bulls#%t. Prefer Qobuz for two channel lossless and Hi-Res but they don’t deal in multichannel atmos tracks.
Wayde Robson posts on December 31, 2021 12:36

It was “announced”, God only knows when it will actually be deployed, I'm waiting for it my region too, but I hear it will be deployed slowly region-by-region. Hey, I make no promises about Spotify. I want to test it out and compare it to others, I've been waiting since last Feb when they announced it for the year 2021, but they're running out of time, they've got around 12-hours or Spotify looses credibility IMHO.

Even Apple's “lossless” stream is imperfect, it's only available over very specific setups and not at all if you're using a Windows PC, support for which is apparently coming anytime now, I'm still waiting.
Post Reply