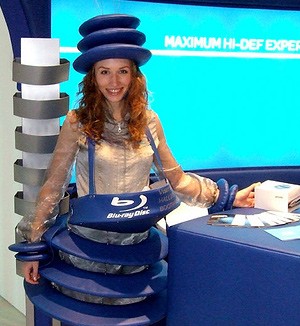 Hello, I am Blu-ray... Take me to your leader

Blu-ray has become one of the most successful new consumer electronics products to come along in recent history.  So says Andy Parsons, Blu-ray Disc Promotions Group chairman. He says the format made huge strides in the final weeks of '08 and shows no sign of slowing down. The only real competitor on the horizon for Blu-ray are digital downloads and all I can is - don’t hold your breath.

The Blu-ray Disc Promotions Group wants you to know… Life is better in 1080p with high-resolution audio formats and exclusive Profile 2.0 downloadable content. At least the movies are better. The source of Andy Parson’s glad tidings about the Sony’s new disc format are estimates cited by DisplaySearch that says 10.7 million stand-alone Blu-ray players and PlayStation 3 consoles have shipped since the format’s launch.

“A lot of people think of DVD as an overnight success, but actually if you look back, we have some data from CEA market research that shows three years into the launch of DVD 5.4 million players had shipped into the U.S. market. So if you are comparing DVD to Blu-ray we are actually looking at a considerably larger number of players that have shipped in only 2.5 years into the life of Blu-ray, so we are doing quite well.”

Parsons says the rate of adoption is growing rapidly citing a three-fold increase in sales of players in 2008 compared to 2007. Parsons also points to the penetration rate information of Blu-ray players into American homes gathered by Adams media Research. Adams says BD players are far outpacing other devices at the three-year points in their roll-outs.

Numbers to get happy about

According Adams research; there are nearly 1,100 Blu-ray titles available on the U.S. market. The Dark Knight was the first Blu-ray Disc title to achieve 1 million sales. While the world was worried about recession last October 2008 – Blu-ray was selling its first 2 million disc sales month. This was quickly eclipsed by the following November which saw over 3 million disc sales and then December saw over 8 million. That’s some compelling momentum in Blu-ray’s favor.

The rosey outlook can be spliced up another way: 2007 saw 5.67 million discs sold. That number grew to 24.09 million in 2008. More than 30 million Blu-ray discs in total have been sold in the United States.

The Blu-ray format intends to be potent and flexible enough to facilitate upcoming technologies like 3D Television. Parsons says Blu-ray makes the perfect platform on which to develop 3-D TV in combination with high definition.

There is nowhere to go but up from here. Adams Research says that Blu-ray will likely double or even triple all of its numbers in 2009.

It’s all my fault

With all these numbers looking so good for the future of Blu-ray it’s hard to be cynical. A lot of readers blamed Audioholics at large for an HD DVD bent during the format war. But I’m here to tell you nothing could be further from the truth.

I admit I am probably solely responsible for being an HD DVD supporter – for a small list of now irrelevant reasons. The fact is – HD DVD is dead and I’m now sipping deeply from the Blu-ray kool aid and have no regrets.

A lot you believe that downloadable or streaming movies are the way of the future and will eventually eclipse any disc format. You may be right. But not for a long, long time.

The new wave of dedicated idiot-proof set-top-boxes is no guarantee of the high standards in movie sound and video quality you’ll get with Blu-ray. There are several hurdles to overcome before the mainstream population will be comfortable downloading movies. One major hurdle may be the infrastructure of the Internet itself.

It’s true that a lot of Home Theater viewers aren’t the aficionado’s that we Audioholics are, so many are satisfied with HD films that aren’t really even 1080p with high-res multi-channel sound. Before movie downloads can really compete with Blu-ray quality – the Internet may have become faster and data may need to become a whole lot cheaper. At least that’s what the cable companies are telling us in their own muted way. In 2008, as Blu-ray was climbing the cable industry fired its first salvo at downloadable media.

Cable Companies from Comcast to many of the smaller ones throughout the US are reeling in their claims of unlimited Internet access. Comcast has set a hard cap on its Internet access plans to 250 GB of downloads before customers are treated to extra charges. Sure, 250 GB sounds generous today. But generous today is easily tomorrow’s baseline requirement, especially in a future where we’re downloading all of our television and movie programming.

If you thought computer and consumer electronics companies were slow to get their act together with HD disc formats. Wait ‘til you see how lumbering the Cable business can be at learning to deal with a la carte downloadable programming.

Read the Complete Thread
skads_187 posts on January 22, 2009 17:22
as long as picture quality isnt affected, if it is, i will be very disappointed. im not sure how much space a movie (video and audio) in GB takes on a BD. Imagine downloading all of that content?
Im not sure if im the only one, but i like having the cases to the movies. anyway. thats just me.
BMXTRIX posts on January 22, 2009 16:32

skads_187, post: 512713
i don't think i would be interested in down loadable content. I like BD's, the only thing is, as other mentioned, making the transition as far as movies collection goes. I already have a pretty extensive dvd collection, now in order to replace them all, will cost a lot of money. I have slowly slowly started buying BD's at 10-15$ each, as long as the price is right, now i have some duplicates.
but i hope it keeps selling more players and movies, so that prices can drop hopefully.

I certainly can't imagine replacing my SD DVD collection with BD except for a few specific titles. Yet, digital downloads aren't going to let me even play my DVD collection, and there's no other format that I'm aware of which offers the portability of DVD except for Blu-ray.

Sure, we still have a few years to wait to be at a point where 25%+ of people will have a player, but the market is definitely headed that direction… at least in the USA.
skads_187 posts on January 22, 2009 14:27
i don't think i would be interested in down loadable content. I like BD's, the only thing is, as other mentioned, making the transition as far as movies collection goes. I already have a pretty extensive dvd collection, now in order to replace them all, will cost a lot of money. I have slowly slowly started buying BD's at 10-15$ each, as long as the price is right, now i have some duplicates.
but i hope it keeps selling more players and movies, so that prices can drop hopefully.
Bluesmoke posts on January 22, 2009 02:27

larzman, post: 512304
Seems like the spokesman in this article is a little more than slightly biased. Remember, he is from the BluRay Promotions Group. Something he & others should consider, not everyone wants to pay again for BR-DVD's of content they bought in SD. Honestly, Hollywood only produces a few movies a year that are truly worthy of high definition (1080p). when they make movies more worthwhile, hi-def content can be acquired much less expensively from sources other than BluRay DVD's.

I for one will not touch a BR-DVD player, and I have the capability to watch hi-def content whenever I like, and if there's a particular movie I want to see. Why pay exhorbitant amounts for hi-def when another format will be replacing it in a couple of years anyway?

larzman, post: 512304
I for one will not touch a BR-DVD player, and I have the capability to watch hi-def content whenever I like, and if there's a particular movie I want to see. Why pay exhorbitant amounts for hi-def when another format will be replacing it in a couple of years anyway?

No offense, but I pay the same BB Online fees I did last year, and hundreds of thousands of others do as well and have 100% access to Blu-ray for the total additional cost of $0.00 per month.

Not sure what you think will be replacing it in a ‘couple of years’ since there is nothing on the horizon which is setup to do so at all.
Post Reply