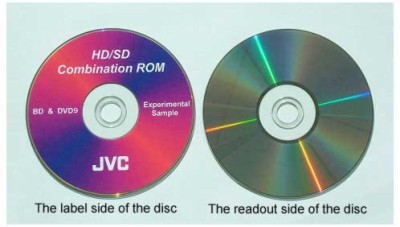 JVC announced that it has developed the world's first Blu-ray/ DVD combo ROM disc technology, which enables storage of video content in both high definition and standard definition. The new ROM disc, which has a total storage capacity of 33.5GB, uses a triple layer structure made possible by JVC's development of a proprietary, high-performance reflective film.

The new Blu-ray/DVD combo ROM disc has a one-side readout, triple layer structure comprised of an outside Blu-ray disc (BD) layer and inner DVD dual layer (Fig. 1). The outer BD layer is capable of storing high definition video signals up to a capacity of 25GB. The inner DVD dual layer can store up to 8.5GB of standard definition video signals. During Blu-ray reproduction, blue laser read the outer BD layer, while red laser read the inner DVD dual layer during DVD reproduction (Fig. 2). The triple layer structure was made possible by the development of a high-performance reflective film that reflects blue laser used for Blu-ray reproduction, but is transparent to red laser used in DVD reproduction. The proprietary technology builds upon JVC's past developments in the field of disc processing technology.

The development of the Blu-ray/ DVD combo ROM disc opens the way for the emergence of video releases containing content in both Blu-ray and DVD formats on a single disc. Users can purchase a single disc that can be reproduced at high definition BD video quality on a large screen home theater system, or play back the disc at standard definition DVD video quality on a smaller TV set, a home PC or laptop computer. Users that do not have a Blu-ray disc player can view the video content at standard definition using their current DVD player, and enjoy the same content at high definition resolution when upgrading to a Blu-ray disc player in the future.

JVC will forward a proposal to the Blu-ray Disc Association (BDA) to have the technology accepted as a specification for future commercialization. The company is also working on a Blu-ray/ DVD combo ROM disc with an even larger 58.5GB storage capacity. The proposed disc will be comprised of a 50GB Blu-ray dual layer and 8.5GB DVD dual layer structure.