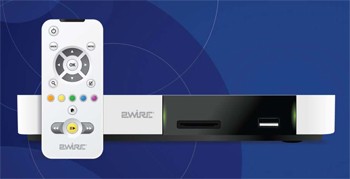 The twenty-first century welcomes Blockbuster Inc. and its Internet set-top box dubbed MediaPoint. The box will go head-to-head with others of its ilk by competitors like Netflix and Apple proving that the ailing company still contains signs of life.

Remember when Blockbuster was a giant in the entertainment biz? It was so influential because it singlehandedly owned a significant slice of total film revenues. Even film critic Roger Ebert believed its near-monopoly on movie rentals hurt the film industry by promoting pan-and-scan versions of movies and its policy not to carry NC 17 films which he believes hurt the creative freedom of directors. Ebert once said:

Well, Roger Ebert would be happy to note that the once mighty Blockbuster has seen better days. The movie rental giant’s stock has been in free-fall since 2004. Unfortunately that’s not due to a rapid surge in cinephile purity. Rather, it’s more about Blockbuster’s inability to adapt to changes in the movie consumer.

The stop-off at the video store may have satisfied us back in 1982, but it’s gone a little stale in the decades since. Sure, Blockbuster has adapted the same business model to bring on DVD and now it even boasts a budding Blu-ray collection. But competing in the modern age has eluded the company. You’d think Blockbuster would have at least tried to be a little quicker at following the competition.

The rental super-store dominated back in the 80s with the sheer volume. It was an example of the power of scale the main business principal outlined in the book “Long Tail”. It goes something like this:

Every corner video store in town carries the top ten video rentals. But it’s the one that will also carry last month’s top ten and a dusty old copy of Lawrence of Arabia that won customers. No wonder so many of us were greeted with smiling faces adorned in Kaki and blue with an exuberant: “Welcome to Blockbuster.”

Welcome to the Internet

Blockbuster never adapted its power-of-scale to the possibilities introduced by the Internet. It sat by as Netflix pillaged its market share with web-based mail order movies. No brick-and-mortar store can compete with the scale offered by a decentralized movie collection.

Netflix jumped on board the on-demand, set-top box game – we’ve also seen offerings from Apple, Amazon, Vudu and many others. It’s getting crowded in your home theater system.

Blockbuster has finally joined the fray with MediaPoint. The box sells for $99 and includes 25 movie rentals. Rentals from its collection of over 2,000 titles start at $1.99 and go all the way up to $3.99 each. You have 30 days to view your rental but only have 24 hours after you initially start viewing.

What’s the difference? MediaPoint downloads movies before playback rather than streaming like Netflix. Of course everything is a pay-to-play rental, unlike the current Netflix set-top box solution. Blockbuster says its download-before-playing model provides superior video quality over the competition. The tiny box even has an HDMI port for HD viewing, though no HD titles are yet available. All we can say is it’s about time Blockbuster showed signs of modernizing. But it will surely see significant late fees.

Sheep, post: 490612
That can't happen until internet over here speeds up a bit, and is more reliable.

It's probably safe to hold your breath - remember, only 10 years ago, most everyone was still using dial-up, and a few years before that, hardly anyone even had internet.
Sheep posts on December 01, 2008 23:10

Halon451, post: 489703
Well written article and well written response - the analogy of the Titanic is by far one of the best comparisons I've seen regarding Blockbuster. I wholeheartedly agree, I believe this is a case of “too little, too late” - had they been quicker to adapt, they might have more of a competitive edge on this market (and might even have the HD titles that appear to be lacking in this early version). Still, I believe eventually the concept of “hard-copy” media will be rendered obsolete, and we will enjoy streaming all of our favorite movies, shows and music right across the wire into our homes. The thing I'm not sure of is if it is being pushed by the industry or if the industry is desperately attempting to follow the trend. :o

That can't happen until internet over here speeds up a bit, and is more reliable.

SheepStar
Audioholics posts on December 01, 2008 15:56
I'm still confused why everyone gets lumped together. There seem, to me, to be two distinct camps: those who run a fee-based unlimited download service (Netflix), and those who charge for each download (nearly everyone else).

Now everything else comes underneath that - and there are quite a few things: HD vs SD, new release vs. old release, movie selection, download fully before viewing vs. instant streaming, quality, etc…

But so far, I don't consider anyone “direct” competition to Netflix until they present options for a set monthly fee with unlimited rentals. I WANT competition, so I am waiting for the chips to fall…
Wayde Robson posts on December 01, 2008 10:03

davidtwotrees, post: 489685
..it seemed a bit condescending of Blockbuster and “ilk” of that nature.

Thanks for the thoughtful responses David. I think I might have been a bit condescending of Blockbuster but I do use the service, I have a discount club-card. So, I don’t bear an outright hatred/boycott grudge. It serves a purpose but it's been falling since about ‘02, I mean, you should look at the company’s stock. I have never appreciated its hand in passing off pan-and-scan as a legitimate DVD version of any film and I resent its past control over studios practically abolishing NC-17 as an option. However, that’s not Blockbuster’s fault. It’s more symptomatic of a desperate industry.

Blockbuster's decline from near-monopoly to just another player in the movie options game is fair evidence of the rise of streaming and/or downloaded video. I think it's fair, I love the idea of more options and will never begrudge streaming or downloading.

But for me… I love owning the movie. I love caressing a box-set as I crack it open, and if it has some cheesy feature like Band of Brother's metallic ‘ammo box’ the more I like it. I own more Blu-ray discs than I ought to. But what can I say, I'm happily addicted. I love the sound/video quality on my home system. Downloading or streamed media would be a compromise.

Before anyone argues that last point… I know it's possible for downloaded media to be every bit as good as disc media. I'm skeptical of how practical it is, for now. I don't know where I can consistently obtain recent, high quality movies with multi-channel lossless audio tracks and near-perfect 1080P video. Maybe someday, but not yet.
davidtwotrees posts on November 29, 2008 19:39
In the realm of corporations I dislike, I certainly wouldn't put Blockbuster up there, Jamie. I kind of lump them in the Starbucks and Walgreens class. Sure they saturate the market and maybe overcharge, but they're not running oil tankers aground, or manipulating energy markets in California, or dumping the economy in the toilet for sheer greed through snake oil home loans.
As for paying $3.99 for a movie rental………..gosh, that's if you don't get on a plan. I have one at a time unlimited for like $10 a month so I pay a couple of dollars a movie at Blockbuster which is half a block away. I am happy with the service they provide.
Post Reply