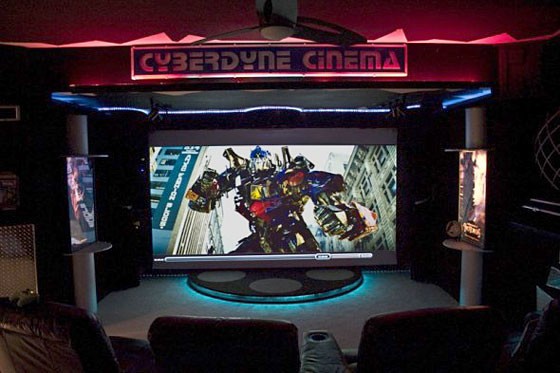 That’s fine and dandy for the Terminator, but for Darren Mortensen, that mantra made for the perfect home theater—as well as the opportunity for a career change.

When Mortensen first thought about creating his own home theater, he wasn’t working as a Christmas elf; he was a respiratory therapist, specializing in acute cardio-pulmonary support and trauma. A noble profession is no match for the home theater bug, however. Soon Mortensen found himself designing a nice room with a built-in CRT TV, A/V cabinets and a hidden door for access to A/V components. As the project progressed, so did Mortensen’s plan.

With no knowledge of CAD, Mortensen drew this in-depth theater design freehand on paper. Early drawings even included a “Jurassic Park” theme, with giant dinosaurs busting through the walls.

However, cool looking just wasn’t cool enough. “I studied the characteristics of sound waves and how the construction of a room can alter the absorption and refection of sound,” Mortensen says. “I wanted the room to sound as good as it looked.” This meant designing and building panels to assist in the dispersion and separation of the surround sound effects. He also used aluminum tread plate for acoustical reflective panels.

The aluminum also lent itself to the look that Mortensen was working into his room, which is now dubbed “Cyberdyne Cinema.” Cyberdyne Systems was the fictional company depicted in “The Terminator” films. However, this project wasn’t meant to harm humans, only to entertain them.

Cyberdyne Systems may want to keep some of that doomsday information classified, but Mortensen loves to show off his stuff. “The majority of the equipment is located on glass shelving within the recessed A/V shelving at the front of the theater,” he says. “I did this intentionally to lend to the industrial look and feel of the theater.” The equipment is then obscured when the mammoth 159-inch Da-Lite screen is activated; this prevents distraction from equipment lighting.

However, there is a little magic in this ode to movie monsters. Behind the display of drive-in movie speakers, there’s a nifty hidden equipment door. This allows for easy access to the back of each component, making upgrades and maintenance a breeze.

majorloser, post: 571783
When the guy buys one of these then he can call his theater the “Terminator Theater”.

MatthewB., post: 571649
I actually think MajorLosers HT looks more like the terminator theater than this guys. Just cause he calls it Cyberdyne does not make it so.

When the guy buys one of these then he can call his theater the “Terminator Theater”.

BMXTRIX, post: 571416
I don't remember exactly, but it's not exactly hard to Google and get some crazy shots of that particular theater…

I like the Batcave there as well, I thought it would be pretty fun to do a Hogwarts themed one - definitely suitable for a ‘dark’ themed theater setting.

I like the Batcave too as well as the Kipnis thr is freaking too much. Every time I see that thing it kills me…….
Post Reply