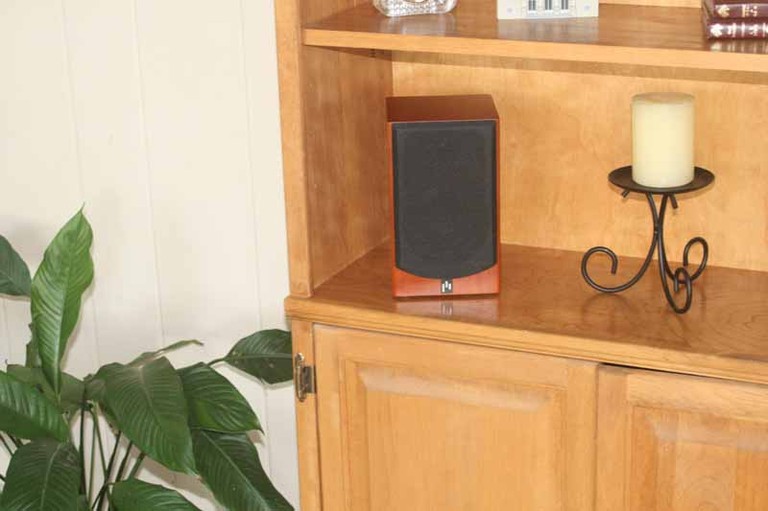 This installation is truly unique. I found a basement in Florida. I know, I know, typically they are referred to as "swimming pools" but this one was actually a basement. And it was under a concrete slab of sorts. Don't ask, but it was cool to run into a totally new situation and stretch my troubleshooting skills to their limits. This job entailed integrating a new 5.1 audio system from Aperion Audio (using their new 4B speakers and Bravus 8D subwoofer) into a one-of-a-kind Florida room. The bar was set high, so I grabbed "Tim" the homeowner and inquired about the best way to place the speakers and design the system.

Some people have older systems or none at all. Tim, the homeowner and Pastor of Trinity Presbyterian Church here in town, had a 27-inch tube television an old DVD player, a VCR and an Xbox (no, not a 360). The best video resolution in the entire system was the interlaced component output from the DVD player, however since the television couldn't support anything more than composite video - we were sticking with the lowest common denominator. I had never seen so many yellow cables in my entire life - but the existing system actually had some level of genius to it. Think about this: the TV only had a single RF (cableTV) input and a single composite input. There was a VCR, Xbox, DVD player and Cable box. How would you hook it all up? They pulled it off (with no cable-switching required) and I was, to put it bluntly, rather impressed. The VCR took the input from the DVD player, and the game system fed the TV's composite input directly. On top of this, the cableTV went directly (via F connection) straight to the VCR and then on to the TV using channel 4 as its default input. And they think I'M the expert!

This family was in for a real treat, however, and I couldn't wait to deliver the goods. We'd be adding a real Yamaha RX-V663 AV receiver, Aperion Audio's new Intimus 4B satellite & 4C center channel speakers, and a Bravus 8D subwoofer - product types that to my knowledge have never graced this living room. I was excited and so I got ready for whatever lied ahead.

By now I figured I was prepared for anything. As I often find, I was wrong. Walking into the home of this fourth installation I was led to a room positioned towards the rear of the home. This was an enclosed "Florida room" of sorts with a poured slab floor... on top of a basement. What? In one of the most unusual structures I'd ever seen I found that the room into which I'd be installing a 5.1 system from Aperion Audio was actually sitting atop an honest-to-goodness basement accessible from the rear of the home. It had a flat roof, so there were no attic options available to us, leaving the floor as the main point of access. That was cool... or so I thought.

Getting a lay of the land, we decided to keep the entertainment system exactly where it was and simply work the front three speakers into appropriate positions, while adding surround speakers to the rear of the room, flanking the main listening areas. This would keep the room simple, and not disrupt the aesthetics more than necessary - a major factor in our considerations. To do this we needed to come up through the basement in a very accurate manner so as to drop down and run our cables through to the rear of the home (underneath the room itself).

This was a trying time and took a lot in planning the actual undertaking. Because the room was essentially situated on concrete there was no convenient way to drill up into the wall cavity to run our surround wires. Access to the crawlspace was via one of two methods: going in from underneath the rear deck, or snaking around through the basement and entering through a transitional area with gaps in the footer. I choose the former, but actually ended up using both before the job was over. By the way, if you like collecting various animal skeletons - crawlspaces under old homes are the place to be.

I began by working through the surround speakers. Fortunately, this was an older home - and that meant holes and vents. We found that if we ran the wiring through the vents in the rear of the crawl space we could snake them up and under the lap of the siding and into the home. It left very little cable exposed (just 2-3 inches) - much less than any typical aftermarket cable or phone company. OK, that was the easy part.

The hard part was figuring out how to come up behind the entertainment center. It moved easily enough and there were several power outlets for reference. The trouble was, none of them showed up on the Florida room side of the wall. That meant I needed to go around and enter the main basement and make my way to the opposite side of that wall (on the other side). This wasn't a big deal, except that the layout of the house made for some really complex measurements that needed to be taken in order to get my bearings. Remember, I needed to know exactly where to drill so I didn't come up in the wrong room or miss and go through a bedroom floor. Getting my bearings was of the highest importance. After several trips back and forth I was able to determine that NONE of the power cables I was looking at ran to the locations inside of the Florida room.

Darn you, Murphy! This meant they were on the opposite side of the wall - in the children's bedrooms. Everything I had based my measurements (and point of reference) on was encased in block and "invisible". Time for Plan... um, C.

I decided to drill out my two panels for the rear surrounds. That way I'd be ready when I finally ran my cables up through the rear of the house. Using my trusty drywall keyhole saw I made quick work of the plaster and slats which needed to be removed for the low voltage box to fit within the wall. Fitting the boxes over each hole I tightened them up and was ready for when the wire was fed up through the empty wall cavity (as with most older homes, there was no insulation, which made my job far easier).

Let's Use a Shortcut

If I couldn't locate my bearings using the room itself, I needed a way to accurately determine location from the other side of the wall. The way to do this (quickest) was to drill through from a known location on the other side. Sounds cool but what does that entail? Easy - I pulled away a bed from one of the kids' rooms and located a power outlet directly across from where I wanted to have the tie-lines for the surround speakers (remember, since we were using an entertainment center and not hanging speakers there was no need to run binding post connections for the front or center speakers).

Pulling off the plate and locating the stud I drilled through (and down, since the Florida room was sunk by about 15 inches) on the other side and made a hole into the room. It was in a good spot and I opened up the hole from the Florida room so that I could insert the 4-pair binding post wall plate and also be able to easily snag the cable once it was inserted from below. I now knew that my hole was about 2-1/2 inches inside of where the AC power outlet cable came up in that room. I also had a lot more mess to clean up - but that's part of the job... or that's what I kept telling myself.

Back in Your Hole!

Making my way through the crowded basement I came back to the side of the wall where I could see all of the AC power running up and into the children's bedrooms. I found the line I was working off of (again, through careful prior measurements and some back and forth between the actual rooms and the basement). Measuring 2-1/2 inches I drilled up into the cavity. Pastor Tim came back to lend a hand and stuck a pen light through our newly-made hole from within the room. It clearly shined down into the access hole I had just drilled. Success!

I pulled off a bunch of Impact Acoustics 12/2 CL-rated speaker cable, enough to make my entire run, and pushed two ends up through the hole. Tim caught both cables and we were off to the races. I belly-crawled through a hole in the footer and re-emerged below the Florida room - cables in hand. Working my way to the back of the room, I executed the plan for running the wires out through the nearest vent and up into the house. This entailed drilling a small diameter hole upwards to break through into the void underneath the wood siding. Shortly after doing this for both holes I had the cables inserted and Tim pulled those inside as well... We were on a roll. I ended up with a bit more slack than I would have liked, but overall it wasn't more than a few feet of wasted cable that we needed to trim. Back inside it was now simply a matter of connecting the wires to my terminations and screwing the plates back into the walls. The next day would be the fun day where we'd connect the speakers and calibrate the system. After spending so much time underneath the house, having some nice air conditioning was a refreshing change and I was ready to end the day.