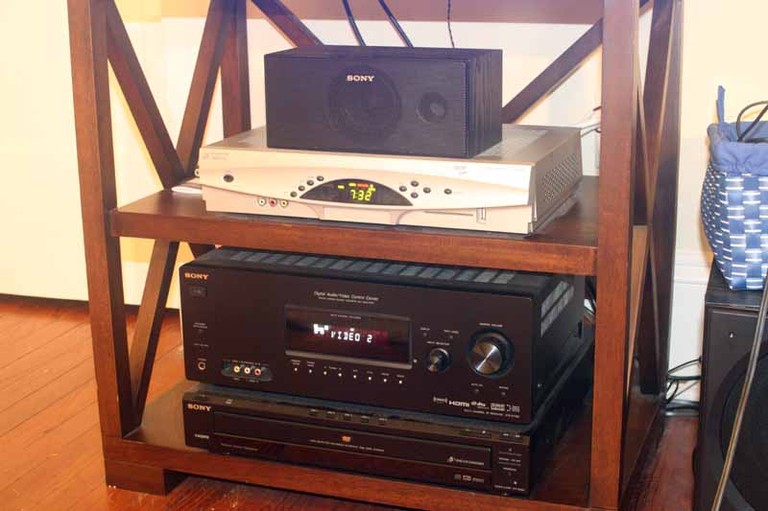 "Frank" is a married guy who would love to have surround sound in his home. He makes a modest living so his budget is wisely limited to around $500 - which lands him squarely in the home theater-in-a-box crowd. Additionally, his room is set up such that we'll have to mount speakers on his ceiling due to doors, openings, etc. The good news is that Frank is very handy and is completely into assisting in getting his surround sound system up and running in the best way possible. His wife is also very cool and isn't holding back his choice of products - the room and budget are going to dictate the limitations.

Frank lives in a nice Spanish-style home that is, near as I can tell, over 70 years old. It's been renovated and has wood floors and lots of character - I couldn't wait to check it out and see what we might do to integrate surround sound. At around 2PM I pulled into the driveway. I really didn't know what to expect, so I brought everything I could possibly think of. It's not like I hadn't done this several times before - but I had never really checked out this house and, apart from knowing it was an older wood frame home, I wasn't really going to be too selective on what I brought along. My equipment list consisted of everything listed in the Surround Sound Installation Primer article

Contemplating how to best handle putting surround sound into the room was actually the hardest part. I asked a lot of questions: Where do we put everything? What's the most efficient way to attack the problem? Where's the sweet tea? (OK, so I was thirsty.) The room was simply too narrow for any sort of bookshelf-on-speaker-stand system. There was also a door blocking the left speaker for a wall-mount installation. I hated to admit it, but hanging satellite speakers from the ceiling was looking like the only reasonable solution for this room. Of course, this limited the size of speaker we could put in here - maybe not such a bad thing given the small size of the room and his budget.

The room is about 11 feet wide by 20 feet long, oriented so that it is narrow and you sit either along the right side or (preferred) at back in two ridiculously comfortable easy chair recliners. I sat down in one to continue thinking about the room and talking over options with the victim… er, owner.

Realization finally set in - we were kind of boxed in (no pun intended... ah, yes it was). The only thing that made sense was a cheap-o home theater-in-a-box system. Oh well. We'd do the best with what we could and tweak the heck out of it to get decent sound. I committed to researching some systems later that evening as Frank was bursting at the seams to go out and buy something to put in here (I like this guy a lot). Of course we didn't need the system to install the wiring, so we quickly got to work.

You Don't Mind If I Make Your Living Room My Personal Workspace, Do You?

Frank's wife was awesome. She let me dump all my gear in the house - right on the rug. I left the C.I.T.S. system in the back of the SUV because it's big and I didn't need all that much from it this go-around. Besides, as convenient as a complete install-kit-in-a-box is, I saw no reason to lug it the 30 feet into the room when I could just lay it open in the back of my Jeep and pull out what I needed. Back in the living room, tools, cabling, drill gun, etc were splayed across the floor - ready for action.

Laying out the wiring plan actually took the longest and was the second phase of figuring out the entire install. That didn't mean that we didn't run into snags later down the road, but it helped to at least have a solid plan. Since the house is an older (1930s) frame house that has an easily-accessible attic, we decided that was the route we'd take. We already decided against wall-mounting the speakers given the door on the front left of the room. Mounting the surrounds on the side of the room would be near-impossible due to the fact that the right wall is an outside wall of the home. For anyone who’s ever been in an attic - that means that drilling and inserting cable through that header would be very, very difficult if not impossible without some major surgery. We wanted to avoid anything that would cause repair work. The surrounds would simply mirror the front and suspend from the ceiling.

Since we were ceiling mounting, the cable run would actually be very simple. Drop all four lines down the wall behind the equipment rack - and then run them to four points on the ceiling. Since the cables poke right through the ceiling and connect to the speakers directly, the cleanest installation was one that didn't even use terminations or any kind of ceiling-mounted wall plate.

Where the four cables came down behind the equipment rack we planned to install four pairs of banana jack keystone modules and label everything accordingly. The center channel would get wired "locally" since it will be positioned near the television. OK, we had a plan - now we needed to execute it.

We needed to measure - a lot. If we didn't figure out exactly where we were, we wouldn't be able to get our bearings. You can't exactly just waltz into the attic and start drilling holes. We started by finding a point of reference... Bingo! The air conditioning duct was almost directly atop our desired location for dropping the four lines down the wall. We could see that it was only a few inches away from the header for the wall that would contain all four cables. That should be easy to locate and we could also (typically) see the nail marks for the studs from within the attic, so we'd know where to drill down below to get in between two studs. In these old homes it's harder to do a knock test or use a stud finder since the entire wall is essentially plaster overtop of wood furring strips - sometimes with a layer of drywall on top for good measure…

We decided to deal with the ceiling holes later - those would be easy.

We found our spot on the wall and drilled a hole into the plaster to define the corners of our double-gang electrical box. This was where we would place our Decora-style binding post connectors. The box fit in easily once we got through the plaster and wall slats. Plaster eats drill bits and blades for breakfast, but we got it all accomplished.

This was a great article. Likewise, it has always given me satisfaction to introduce friends to the wonderful world of home theater!

I am really looking forward to this series of articles!