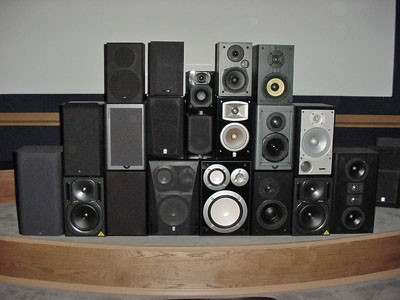 That's a lot of speakers!

It's funny what can grow out of absent-minded, off-hand remarks. At the time, I thought nothing of an exchange with the Audioholics Store manager that went something like: "Hey, we're going to carry Infinity products," and from me, a casual "Hmm, I'd like to hear the Primus line sometime." Then a few days later, a local audio enthusiast asked me if I'd ever heard Aperion speakers. I said, "No, living in a small, coastal town in Oregon, speaker audition opportunities are pretty limited." Well, apparently a few other people in the area felt the same way.

Cut to the end of November - a small group of six volunteers participated in what follows with more enthusiasm than I would have expected, given the minimal budget-level of the contenders. I'm very grateful to all, since any one of them probably spent more on one of their mains than the street price of our entire shoot-out lineup (for the record, purchase price was under $2000 for 9 pair of speakers - MSRP was about $3300). I guess there was no reason to bribe them with THX and Dolby give-aways after all. Anyway, the casual desire had turned into a fairly large face-off.

As with many past shootouts, this was an entirely subjective comparison. I think we had some good ears in the group - certainly better than mine - and we eliminated bias as much as possible, but the results are pure opinion and preference of the participants. In this particular face-off, there were no objective evaluations of design, components, or build quality. This was strictly a sound quality, listening event (although the aftermath discussions included closer physical inspections and comments).

The environment was my 16' x 22' theater room - approximately 3000 cu.ft. – Perhaps just a bit large for these economical speakers, but fairly comfortable for the reviewers if I do say so myself. The front wall and 1st reflection points are treated with absorption. Speakers were placed on stands on the stage which put most of them a few inches above ear-level for front row listeners, and a couple inches below for the back row. There were nine pairs of entry level bookshelf speakers in the face-off (originally 10, but a kit-built pair was eliminated very early due to a flaw in construction by yours truly). All comparisons were made two sets at a time, A vs. B, selected at random from the group. The speakers were set up as A B on the left side and A B on the right side so that the spacing between the pairs was about equal. Each pair was numbered on the back, and my son chose which pair competed with which, and recorded the numbers and cable attachments for each session. The speaker cables were only identified as “White” and “Black”, with corresponding tech-flex coverings to make it easy for him. An accomplished software engineer, but a total novice in audio (where did I go wrong?), he made no attempt to match up similarly sized, performing, or designed speakers. He would try to vary the cable connections when a particular speaker came around again, but didn't make that a big priority. All of this was done behind a speaker-cloth screen wall, so we never know which pairs were playing at any particular time (there were usually a few speakers outside the screened portion, so we could probably narrow the field a bit, but nobody really cared enough to try). When he completed his speaker swap, we level-matched the two pairs with an analog SPL meter and pink noise off a calibration DVD. The source was a Panasonic Blu-ray player with L/R analog connections to a Yamaha RX-V3900. Switching was done between two Zones in "Straight" stereo mode without a subwoofer (I like using the "Pure Direct" mode when trying out speakers, but apparently that won't work when using multiple zones). The participants had control over when the speakers were switched, and always knew which zone was playing, since we used the Yammy remotes to mute one or the other. There was no time limit imposed - a session ended when everyone was through with their evaluation.

Everyone used the same score sheet with 12 different items and a 1 to 5 scale on 9 of them (The other three were comment based). The items included: Quality of high/mid/low, how wide/deep was the soundstage, off-axis performance, etc. (items stolen from a forum thread - thanks!). To save a little time, we sampled various music selections, and then agreed to use a few tracks on a single CD from SevenMoore, a unique combination of blues, country, rock, and pop...electric and acoustic, male and female vocals. Even though a relatively obscure CD, most of us present were familiar with it thanks to Audioholics member Tomorrow, and agreed with him that it was a good choice and "...provided the broadest range of musical elements and included really deep bass runs and super high treble percussion instruments. Some songs demonstrated the power in their songs, and others were as delicate as falling snow. Great group." I wish I could be as eloquent (thanks for the quote, Tomorrow). We didn’t confer during the initial scoring. Later, during the non-scoring final face-off, there was plenty of discussion. Of the 9 pairs evaluated, only 7 were really considered competitors, with a couple ringers I threw in for comparison. My attempt to be clever in adding them backfired a little as they scored the lowest of the group. The 9 pairs (by MSRP) were:

The Pinnacle and JBL were the wildcards added when two of the planned pairs didn't make it. Current street price for 6 of the 9 is under $200/pr.

… but I would feel better if you sent me a hundred bucks.

“Pinnacle P5.2 - These speakers caused a bit of good-natured ribbing at my expense when I admitted they were from my own theater system - just added to ‘round out the field.’ Even though I had recently replaced all the Pinnacles in my theater with a different brand, I'd always been happy with their performance and expected them to do well. The evaluation comments ranged from ”Overly bright“ and ”Harsh“ to just ”ACK!.“ Even I rated them lower than their competition, and I had always thought them to be very detailed without being too bright. I still think that about the P6.3 towers, so maybe my satisfaction with the 5.2's as surrounds wasn't too far off the mark. The average overall rating was 2.64.” (- Gene DellaSala, Audioholics)

I have the Pinnacle Platinum Performance P6.3 towers and P6.2 bookshelf speakers, and must point out that the excellent tweeters in these (and the P5.2 bookshelf speakers criticized in this review) did sound overly bright when new, but mellowed out after about 50 hours of use. I believe this is the only reason the P5.2 speakers fared so poorly in comparison to the other models here.

In a detailed review of tower speakers a few years before, Gene DellaSala recommended the Pinnacle Gold Reference series, which is basically the predecessor to the Pinnacle Platinum Performance series, except that the latter are made with engineered plastic-veneer cabinets instead of woodgrain veneer.

The proof is that I recently purchased the Pinnacle Aerogel Gold tower speakers, supposedly the apex (I hesitate to write the “pinnacle”!) of the now-discontinued Gold Reference line, and discovered that my Platinum P6.3 speakers are actually more accurate, though not as mellow or rich in the bass, and I am happy to continue using them for movie surround sound, while using the Aerogels for stereo music.
Alex2507 posts on February 14, 2010 16:20

Rickster71, post: 686408
If I was a Freudian, one might think there was some significance that this happened on Valentines Day.
Did either of you want to tell the group anything?

If I was a Freudian, one might think there was some significance that this happened on Valentines Day.
Did either of you want to tell the group anything?
Post Reply