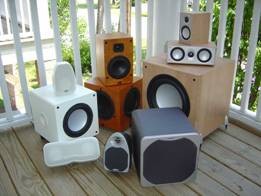 It had been a while since Audioholics did a speaker shootout, so we thought it was high time we gather up the clan and head off to the home theater room for some good old-fashioned listening tests. On the menu were some great contenders from the likes of RBH Sound, Aperion Audio, Mordaunt-Short and Velodyne. Since there are so many factors involved in creating an effective small bookshelf or satellite speaker system, we buckled up for the methodical task of listening to, and evaluating the strengths and weaknesses of, each system.

The testing methodology was simple and straightforward:

Unlike prior reviews I have done on satellite systems, and due to the number of people I encounter who install these types of systems in their homes, I decided to test them in a more real-world scenario rather than as near-field speakers. While a near-field setup will invariably yield better results due to the nature of satellite and smaller bookshelf systems, most people I know install these systems in the same locations as a full range speaker system (or via ceiling/wall mounts), merely capitalizing on their small size and compact look.

After running some basic listening tests, all of the systems were toed-in which widened the soundstage considerably. Rear channels were generally toed in much less than the main speakers. Center channels were tipped forward a bit so as to remain on-axis with the listening position from the top of the rather tall Mitsubishi WS-55813 HDTV.

With that said, the reference equipment used in this evaluation is listed below along with the corresponding model numbers and manufacturers furnishing the gear: