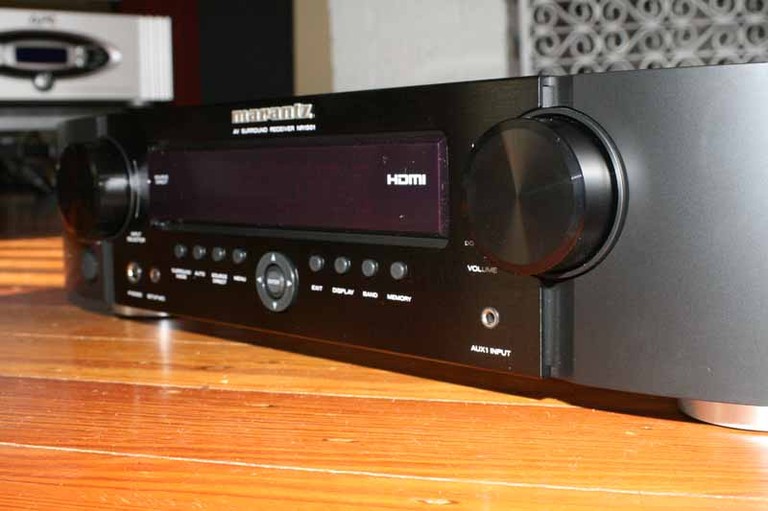 The Marantz NR1501 Surround receiver has it where it counts. For example, the system will handle three composite and three component video inputs and upconvert those to its single HDMI output. This means that users with legacy equipment, such as older DVD players and set top boxes, can simply connect these up to the NR1501 and still get that output to their televisions with just a single HDMI cable. For those looking to wall mount a new flat panel display, or with remotely-located equipment, this is a wonderful feature. It also means that you won't have to switch inputs on your television when going from component video to HDMI. These days, convenience gets a lot of weight in home theater product decisions. The NR1501 doesn't scale incoming video, it merely transcodes it. What this means is that if you send a 480i signal in via component video, it will go out the HDMI output at 480i. This is actually a good thing, since we've seen lots of AV receivers do worse jobs at processing video than displays. If you have a great TV, let's let it do something!

In terms of audio the NR1501 has 5-way binding posts for all channels except the Surround Back channels which feature spring clips. With these clips you'll want to stick to using 18 gauge wire or higher (smaller) but we don't see this as particularly troublesome, especially given the space and cost savings. There are three S/PDIF inputs, a sufficient number given that there are four HDMI inputs which also support multi-channel audio (including the uncompressed Dolby TrueHD and dts-HD formats). If you still use analogue sources there are CD and Aux 2 stereo inputs in addition to the audio inputs available for all analogue inputs. The way Marantz handles its inputs is that they are all pretty much assignable, but by design there are fully analogue options for DVD, DSS and DVR and HDMI (without analogue audio options) is fully dedicated to Blu-ray and Game.

Read the Complete Thread
tkundhi posts on November 25, 2011 21:23
ohio, I've had a NR1501 for 2 years and am extremely happy with it. The shallow depth was my main reason for purchasing it. I needed an A/V receiver to fit into a shallow TV cabinet. I'm driving a set of B&W 601s & CC6 for the fronts and a Velodyne sub. No rears currently. I need to pick a a set of small LM1s for the rear.

On the video side I'm switching Satellite (HDMI), DVD (Component), iPhone (Component) to a Plasma via a single HDMI.

t.
ohio posts on September 09, 2011 17:33
Bumping this, as I jynxed myself and now I do need to replace my D402. The subwoofer output no longer works, even after an attempted warranty repair.

I live in a small (450 sq ft) city studio, so I don't need power. Given my space constraints and neighbors, I've given up on big speakers and critical listening - I'm using a JMlab 5.1 mini-speaker system and mostly play straight from the iPod (can't remember the last time I even turned my SACD player on). I basically want another receiver like this JVC - decent HDMI and upconversion capabilities. Simplicity of cabling and operation are key.

When I move to a larger place, I'll get back to my old setup (top shelf receiver, real speakers, and a 110" projector). In the meantime, is there anything on the market that's an improvement on a NOS D402?
ohio posts on March 08, 2010 11:45
I'm surprised that about 2 years after JVC released the RX-D702 and D402 slimline receivers with Faroudja DCDi chips, the big competitors still haven't stepped to the plate with anything of better value. Chips have advanced far too quickly (and prices dropped too drastically) for those two to still be on forefront of video out of a slimline box.

The Marantz sure seems nicer on the audio side, but it doesn't take up any space to put a decent video processor in these chassis. I guess I should be thankful I don't have a good excuse to replace my 402.
anamorphic96 posts on February 15, 2010 15:39
Great review Clint. This was a receiver I was very curious about. I had a feeling it was more powerful than the specs would suggest.

Did you spend any time with the MRAC system. I'm a little curious as to how accurate it is and how the EQ portion performed.
Post Reply