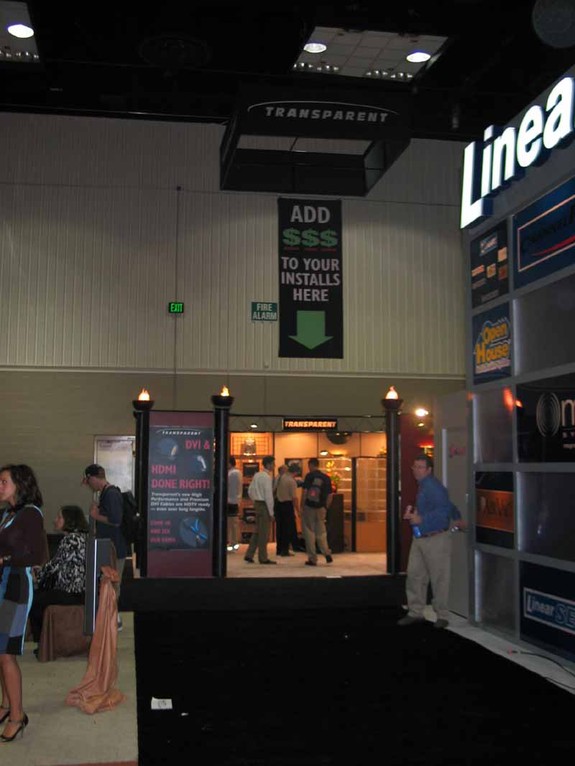 Note: This article was originally published September 23rd, 2005 but we felt it was time for a little update based on some of the new products that surfaced to allegedly fix a non-existant problem.

Some exotic cable vendors (ie. Transparent Cable) and esoteric audio magazines claim that speaker cables exhibit electrical and/or mechanical resonance at audio frequencies and that the RLC (Resistance, Inductance, & Capacitance) nature of the cable drastically changes at these frequencies causing the alleged cable resonance. They often cry bloody murder and seek out solutions to fix this alleged problem to preserve the pristine audio and save their golden ears from such atrocious distortion.  I believe this claim was fabricated either because of a lack of understanding of basic principles of electronics, or an attempt to initiate a false scare tactic to rationalize how an exotic cable vendor can justify slapping an RLC network on the cable and charge consumers high asking prices.  Some even pervert this fallacy one step further by suggesting it is necessary to isolate your speaker cables from mechanical vibrations. There are even companies such as VH Audio that sell a device called a "cable bridge" that they claim allegedly isolates the cable from mechanical vibrations.  These babies sell for $229/ea and the manufacturer suggests you need two per speaker cable (apparently regardless of cable length) to provide "adequate" isolation which would set you back $916.  Luckily the manufacturer is offering a close out discount of 35% off on this item so if you're a believer, you might want to get em while they are a deal.  But, before you run out and shop for a solution to stop your cables from resonating either electrically or mechanically, it may be best to examine if this is a real or made up problem to concern yourself with.

Many exotic cable vendors enjoy promoting the fallacy that their audio cables eliminate electrical resonance at audio frequencies. The reality is unless the cable is so deliberately poorly designed with added passive elements, it will not resonate at all until frequencies exceed human audibility by well over a decade, and usually in MHz region, as can be seen below.

Thus cable resonance is a function of cable inductance and capacitance!

To demonstrate an excessive and uncommon case for an esoteric set-up, we shall apply our calculations for a 50ft length of a cable we reviewed in Speaker Cable Face Off I.

Most high end set-ups keep cable lengths to a minimum (usually 12ft or less) else how could one afford such expensive cabling? (also, every audiophile knows the shorter the cable, the better!) However, let's do a non typical worse case analysis to determine if there is any validity to the electrical cable resonance claim set forth by some exotic cable vendors and supported by subjective reviewers of some esoteric audio publications.

Hmm, the Stereophile Reviewer Wes Phillips once claimed that audio cables resonate at around 1.5 kHz. The basic laws of Electronics and Physics seem to dictate otherwise. Here we see an ordinary 10AWG Zip Cord cable of 50ft length NOT resonating until 2.02 MHz, which is over two decades past human audibility. In fact, if we re-evaluate cable resonance for a typical cable length of 12ft in a high performance audio system, we find the cable resonance gets pushed up to 8.5 MHz!

In reality cables DO NOT resonate at all! The model represented here is single RLC lumped circuit for simplicity and is only accurate at audio frequencies for circuit analysis. A speaker cable is actually a distributed element and should be represented as infinite number of lumped RLC models. As an infinite number of lumped RLC circuits are modeled becoming its true distributed form factor, we see the resonance frequency go to infinity.

In addition, once we approach much higher frequencies such as in the RF region we must re-evaluate the cable as a transmission line. In that respect the characteristic impedance becomes the SQRT (L/C) =SQRT(8.8*10^-6/700*10^-12) = 112 ohms. So if our source and load terminations at transmission line frequencies (1/6th the wavelength) do not match, we see reflections in the line, which can appear like a resonance behavior, but in reality are simply reflections or power loss down the line.

Also note that when an exotic cable vendor claims Inductance, Capacitance and Resistance dramatically varies within the audio band, that this is more total and utter nonsense as can be seen in the following real world measurements on the same 10AWG Cobalt Cables.

Note: Null Measurement below 100Hz. Notice how steady inductance is in the audio band.

Note: Null Measurement below 100Hz. Notice the relatively stead measurement of AC Resistance in the audio band with a meager 0.44 milliohms increase in resistance due to skin effect .

Note: Null Measurement below 100Hz. Again cable capacitance is rather uniform. The slight downward trend by a meager 0.7pF at the threshold of human audibility is an instrumentation error. The more accurate measurement of capacitance of a speaker cable is at lower frequencies since the inductance of the cable is not masking the measurement.

What about Mechanical Resonance?

In microphonics, there is a phenomenon called triboelectric effect which is caused by an impact-related slapping noise as the cable hits the state or is stepped on.  A change in capacitance takes place as the insulation or dielectric is deformed.  The causes piezoelectric transducer like behavior in the circuit between the microphone cable (usually unterminated) and preamp since your dealing with a very high impedance source and small signal propagation going through a very large gain stage from the microphone preamp.  The slight impedance mismatch presented by the low impedance microphone and its preamp makes an extraneous noise generated by the triboelectric effect. This issue is usually dealt with by stuffing the microphone cable with impact-absorbing insulation.

A large signal, low source impedance output like that of an amplifier and loudspeaker system doesn't exhibit this phenomenon.  For one, having a low impedance path has a damping effect on this type of behavior.  The most obvious reason this isn't an issue for loudspeaker cables is that the loudspeaker is NOT acting as a pickup of sound like a microphone would be.  The amplifier already amplified its signal which is being sent to the speaker. In contrast, the microphone which starts out as a very small signal, transmits down a cable and gets an enormous amount of amplification applied to it in the microphone preamp.

This is yet just another example of an exotic cable manufacturer taking a real engineering phenomenon and perverting it either deliberately or by a severe lack of understanding it, to justify selling you an outlandishly priced piece of audio jewelery.

This phenomenon, along with measurements is discussed in greater detail in our article: Cable Distortion & Dielectric Biasing Debunking

Claims of speaker cable resonating at audio frequencies, or drastic changes in RLC properties at these frequencies are both false and unwarranted. So much so, that these two points are worthy of adding to our Top Ten Signs a Cable vendor is Selling You Snake Oil. Next time an exotic cable vendor, retailer, or audio publication claims otherwise, tell them you know better and be sure to point them to this article.

Rich Davis, post: 1014982
Now, when you have a big home stereo and you crank it up at reasonable levels, things in the room will vibrate because of certain bass frequencies, right? Maybe that's what they are talking about. Now, is that going to affect the sound system? Heck, I don't know if that's audible enough, but all they want to do is control the amount a cable is going to vibrate when you turn the system up, then that's what they are doing.

Steven Tyler actually doesn't sound A capella in the shower like he does on stage. It's the swinging of the mic stand and the cable whipping around that does it
Alex2507 posts on February 03, 2014 08:23

Rickster71, post: 993385
Finally someone that knows enough about cables and owns Transparent Audio Cables, as I do!


I'll tell you right now they're all jealous.

I was amazed at the considerably better transparency and dynamics, no harshness at all and greatly increases clarity.


If I was to judge them on nothing but their singularity. They would be worth what I've spent on their cables.

Oh, I almost forgot. I was even able to get rid of my Cable Elevators. Our housekeeper never put them back correctly after she vacuumed; problem solved.

You have a housekeeper?
Rich Davis posts on February 03, 2014 07:48
First off, you mentioned Transparent Cables making some claim about resonance frequencies. I've looked at their web site and I didn't see ANYWHERE, where they mention this.

Now, when you have a big home stereo and you crank it up at reasonable levels, things in the room will vibrate because of certain bass frequencies, right? Maybe that's what they are talking about. Now, is that going to affect the sound system? Heck, I don't know if that's audible enough, but all they want to do is control the amount a cable is going to vibrate when you turn the system up, then that's what they are doing. I know that high current power cables have eddy current going through it and it might leak into another cable that's susceptible to noise. That's one issue these guys might want to deal with. I think those cable blocks they use are more for cable management to make sure cables are separated from other cables, and maybe to keep them isolated from the floor. Cable blocks or whatever you call them is fairly inexpensive compared to the price tag of these systems, and I wouldn't get all weird about it either way. If that's what some feel comfortable doing, then that's their thing.

Now, when it comes to different cables sounding different, I suggest you go to MIT Cables' website and READ and get to a point where you can comprehend EVERY SINGLE Technical Whitepapers, etc. They actually use some of the most precise test measurement equipment used in the audio equipment design/test industry and they are performing tests MOST people, EE's or otherwise, don't know much about. What I'm referring to are Articulation Measurements. They run a test to get a “response curve” of an analog cable. This PROVES that cables inherently act like a filter, which is what cables do to an audio signal, they filter the audio frequencies which in turn affects the sound, for the better or worse. Some can hear those subtle differences, some can't, and it's dependent on a LOT of factors. It takes time to evaluate what is going on since some cables make only make an improvement over and other cable with certain frequency ranges on certain equipment. Cables also have different impedance as does pre amps, power amps, speakers, so some cables are just better suited for certain equipment, which is another reason why some cables might work better or worse, and then there is the subjectivity, which is the listener decides what they like and don't like, that's all personal taste, just as some people like Panel speakers, others like traditional drivers, some prefer folded cabinets, some prefer compression horns, some prefer dome tweeters, etc. etc. etc.

But as far as resonances are concerned, I think they might be talking about when you turn up your system that cables physically resonate to certain frequencies (bass frequencies is my guess), just like things in your room might vibrate, like windows, tables, etc. etc. So maybe that's why they get those blocks to hold a cable in place.
Post Reply