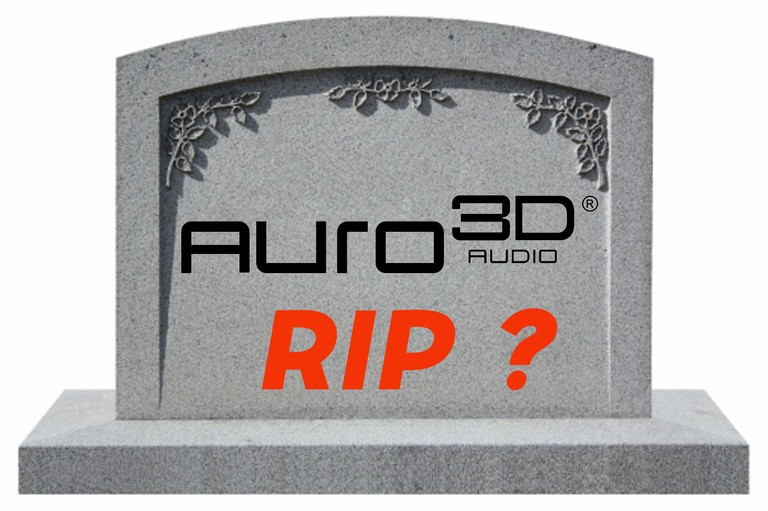 Auro Technologies, the company that brought us the Auro 3D surround format, has filed for bankruptcy as a measure to resolve its insolvency. While it may be difficult to find a silver lining in this situation, Auro founder and CEO Wilfried Van Baelen says the filing isn't Auro’s curtain call. Instead, Van Baelen says that its bankruptcy is only a precautionary measure on a longer road to recovery. The good news, Auro Technologies has been retained in whole by Van Baelen and has yet to sell-off patents or lay-off its work force.

The announcement was made last Friday from Auro Technologies headquarters at Galaxy Studios in the small community of Mol in Antwerp, Belgium. None of the other businesses intertwined with Galaxy Studios are expected to be affected by Auro Technologies filing. In a recent interview, Van Baelen said the measure was needed after months of negotiations when a particular deal for an investor had fallen through. Apparently, the almost interested party wasn’t prepared for the current environment of stalled sales created by current market conditions. Auro 3D troubles were brought on by the one-two punch that started with the global pandemic then evolved into the chip crisis due to the semiconductor supply chain breakdowns. Auro Technologies relies on royalties derived from use of its technology in AV receivers. The Auro story is a familiar one for Audioholics, because the A.V. receiver market is just inside the sweet-spot that puts it among those hit hard by the slowdown in semiconductor fabrication. A.V. receiver manufacturers have experienced decreases in production over the last two years, meanwhile production costs have increased significantly. These are the same conditions that lead to Onkyo selling its AV business to the parent company of Klipsch. Ill-timed lock-downs due to the pandemic and the chip crisis hurt Auro Technologies in additional yet less obvious ways, by stalling projected growth into new businesses. According to the German language website Heise.de, Auro may have been on the cusp of bringing its 3D audio technology to streaming services and soundbars. Before the troubles that started in 2021, the company had already developed products that were ready to embed into the incredibly popular soundbar segment and was just finishing applications that would have brought Auro 3D to high-resolution streaming platforms. But 2021 put these plans for sales into a choke hold. Now it looks like these expansions won’t constitute meaningful sales for the company until sometime in 2023 or even later. Auro 3D may control the Voice of God, but was helpless against an act of God. This was the messy situation that led to Auro’s tap-out. But we’ll soon see if Van Baelen can take the “L” back to training camp, only to come back stronger.

If anyone can bring an audio technology company back from the brink, it might just be the brothers Van Baelen. Auro Technologies is no ordinary tech startup. It’s part of an ecosystem of companies based at Galaxy Studios in an out-of-the-way vacation town in Mol, Belgium. Wilfied Van Baelen says his insolvency and corresponding bankruptcy is a challenge to restructure the company and.. “Bring new impetus to marketing and sales.” Which, apparently is exactly what it needs to bring back at least one errant investor.

Auro Technologies is just one of the Galaxy Studios companies, the site of a major European audio conglomerate started by Wilfried and Guy Van Baelen and is still located at the site where Wilfried developed the Auro 3D surround format in 2005. In 2010 Van Baelen and partners formed Auro Technologies as a separate company, possibly for just an occasion as they presently endure. The Belgian studio is a veritable hive of separate film production businesses, from Mollywood that provides funding, Zilvermeer Productions that makes movies and of course Galaxy Studio itself for recording and mixing soundtracks.

After creating an independent Auro Technologies in 2010, the Auro 3D format sprung onto the world in 2011 when it was picked up for the entertainment division of a major European digital projection company, Barco. Barco is a top movie projector company across Europe and Auro 3D provides the immersive cinema surround sound.

Gene, Don and Matt discuss the obstacles Auro has yet to overcome leading to this situation. Can an audio codec survive just upmixing and NOT producing native content? We feel it's highly unlikely.

Although it wasn’t the first surround platform to add a height channel, that next frontier in surround technology was already in the air by 2011 when it launched in Barco theaters. But it did beat Dolby Atmos to theaters by about a year. Like Dolby Atmos and DTS:X, Auro 3D expanded 5.1/7.1 surround sound to a height channel for 9.1, 11.1 and more by adding what Auro calls the “Voice of God” height channels to the mix. Auro 3D setup at home is known to be a little more restrictive in number and positioning of its height channel speakers. But, Auro’s claimed differentiator is that its mixes for movies and live musical performances that employ its own height microphones are able to reproduce recorded sonic environments in your living rooms or man-caves better than either Dolby Atmos or DTS:X. We find this claim to be dubious based on extensive demo experiences of all three systems over the last 7 or 8 years. The company’s insolvency couldn’t have come at a more inopportune time for Auro Technologies, as the format’s popularity in Europe was only just beginning to translate to the North American market. Auro 3D had already appeared in AV receivers by Denon and Marantz (Sound United) and was just added to the latest crop of Yamaha receivers. Auro 3D suffered from a lack of software, especially in North America to let Denon, Marantz and Yamaha owners really hear what the format can do. Movies released in Auro 3D to Blu-ray disc have been difficult to find for red-blooded American home theater fans and those handful of movies weren't even in 4K. But that may have been about to change. Auro signed an agreement with Sony Pictures that promised the release of ten movies to include Auro 3D soundtracks in 2016. Unfortunately for Auro and the North American market, Sony released discs with the Auro 3D tracks outside the US market that only got to hear a Dolby Atmos surround audio track. This led to a grey-market of North American demand for the new alternative surround mix of the movie Spiderman Homecoming. Certain German online Blu-ray Disc retailers received a sudden swell of orders from the United States as the German version included an English soundtrack with Auro 3D surround. One more bright light for Auro 3D is its upmixer, AuroMatic. Its ability to upsample any multichannel mix has garnered favorable reviews from listeners who find it superior to either the Dolby Atmos upmixer and DTS Neural:X. Our own extensive listening tests did reveal the AuroMatic upmixer to be preferable over the DTS Neural X alternative but we usually preferred the Dolby Surround Upmixer with "center spread" engaged (for 2CH sources) since it did a superior job of extracting decorrelated audio from the music sources. Still on some acoustic program material, we preferred AuroMatic over the DSU as it did a better job of focusing the soundstage towards the front and center of the room.

It’s unfortunate that for now at least, the only way most of us will benefit from hardware that includes Auro 3D is through its upmixer. In our opinion, a surround format cannot survive on upmixing alone. Native content must be readily available either on optical disc or streaming, or preferably both. Competition is good, especially in a high-value market like audio-video. After spending our hard-earned dollars on a surround audio system, naturally we all want the freedom to choose between a variety of surround mixes so we can decide for ourselves which one we want to hear. With DTS:X declining in popularity on new movie releases, Blu-ray discs and streaming services, we’d all benefit from Dolby feeling a little heat from competition. We should all want to see Auro 3D make a comeback in fighting shape so it bring back competition in the surround mixes we enjoy at home or in the theater.

Do you think Auro 3D has a future and do you currently have it in your home theater? Please share your comments in the related forum thread below.

Read the Complete Thread
jocedeg posts on June 24, 2022 11:13
Headline could have read “3D audio format that was never really adopted is fading away into bankruptcy”.

Does that mean all the AVR/AVP with Auro3D will cost $50 less?
Post Reply