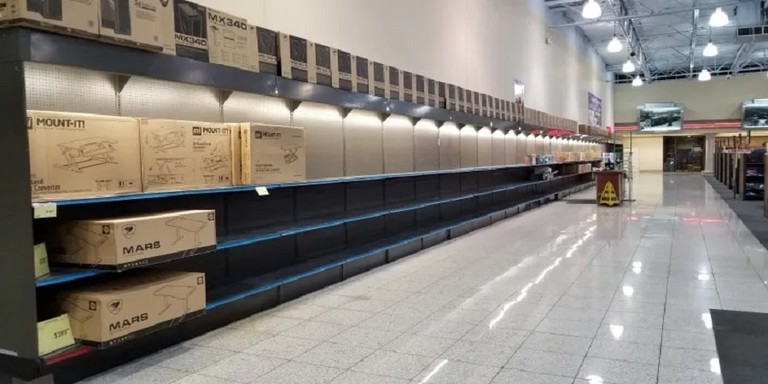 Audioholics President Gene DellaSala doesn’t like it when I talk politics, but I do it when I have to, and this is one of those times.

Too many AV enthusiast websites are so milk toast and advertiser ass-kissers that it makes me sick as a former publisher in the industry. Somebody has to tell you, the home theater and audiophile buyers of the world, the truth and how it might affect your system. Today, that guy is me.

Vladimir Putin’s war in Ukraine is senseless. He’s trying to reassemble The Soviet Union for no reason other than greed, hate and evil. And he’s likely to succeed in the short term despite crushing economic sanctions put on Russia and their billionaire oligarchs by The United States, NATO and the West. Why the people of Ukraine didn’t better arm themselves after 2014 when Russia “tested the waters” of a full invasion in Crimea is beyond me. Ukraine needed Patriot Missiles, (repurposed Russian) planes, much more training and had plenty of time to make that happen but somehow they didn’t. That’s in the past. What’s notable today is that Vlad has set a very dangerous standard in the Twenty First Century that will change the world and very well may impact your future AV investments. Allow me to explain… Russia will very likely take over Ukraine in the coming days/weeks if the talking heads on cable news are correct. The biggest problem with that for our little AV part of the world is the precedent that it sets for China to take over Taiwan. The U.S. has fought our fair share of wars over fossil fuel but as of today, we are the world’s top producer of natural gas and right up there with Saudi Arabia in oil. That’s very different than in the 1970s with the gas crisis or even in the early 1990s resulting in the Iraq war. The issue here is that Taiwan makes what the world needs more than oil or natural gas and the product is semiconductors. 60 Minutes on CBS has been covering this topic fantastically over the past year or so. American companies might have invented the semiconductor but a little over a generation later we are not the world’s leader in production or sophistication. Taiwan is and by a country mile. The CEO of Intel was on 60 Minutes explaining how there is one (not fully state of the art) plant in the Phoenix, Arizona area that makes semiconductor chips in the United States. Intel is building another one now for about the same $5,000,000,000 cost as the So-Fi Football Stadium here in Los Angeles. That’s a great start but we still have cars sitting half built waiting for chips in American factories while dealerships are charging “over sticker” for new vehicles. Chips are in everything including our AV gear and devices. President Biden got big applause for saying that he was going to take away Russian oligarch’s yachts and jets but the real news from The 2022 State of The Union Address was Intel’s commitment to build $100,000,000,000 worth of chip plants near Columbus, Ohio. That’s a 100 BILLION investment in the commodity that drives our “post-COVID” (if you will) more consumer consumption driven economy. That is really big news. Incredible news but much like the Rams had to play in my USC Trojan’s 1920s Los Angeles Memorial Coliseum for a few years, these plants won’t be online for a while. What makes any of us thing that Xi Jinping will wait for America to be a world leader in sophisticated semiconductor manufacturing before taking over an under-armed Taiwan? That shoe could drop at any moment.

We talk in cliche in the audio-video space about how everything is made in China. Quite a bit of gear is made in China. They have relatively low labor costs, close to no environmental controls like we have here and in Europe and respectfully, they are pretty damn good at making electronics. You know who is better? Taiwan! Most AV receivers are made in Taiwan even if they come from companies that are Japanese, South Korean or from other parts of the world. That’s just the reality. Another reality is reports suggest that, just like Ukraine, Taiwan was focused more on building their manufacturing economy and protecting their people against a viral pandemic versus being a eastern, military powerhouse. That’s a big potential problem for the U.S. economy if China pulls a Putin and goes for a land grab in Taiwan.

There are other places in the world where AV gear comes from, most notably Vietnam, but they couldn’t possibly make up for the shortfall in chips as well as finished goods if China were to take over Taiwan and we put economic sanctions on China as we have on Russia. I can drink local vodka and power my car with the rays from the sun but can you live without an iPhone, Macbook Pro or Ring Doorbell? Unlikely.

Who knows what the geo-political future of the world will look like in the next six to 12 months but what I can tell you, the AV enthusiast, is if you are considering making an upgrade to a product that is made in China, Taiwan or uses microchips be it an AV Preamp, an audiophile DAC, an AV receiver, new 4K HDTV, a projector or any kind of smart home tech, laptops, phones or tables – buy them today. Don’t wait if you can afford it now.

Personally, I have been working on a 15 inch Apple Macbook Pro for 4.5 years. I bought a nice new one after I sold HomeTheaterReview.com and AudiophileReview.com but I was forced to return it to Apple because of conflicts with their OS Catalina and the Adobe Creative Suite as well as problems porting over iCloud items like passwords. That MacBook Pro has been a workhorse for me and I am not flush with funny money right now but I am buying a new one anyway. Unlike PCs, MBPs hold their value overtime which is a huge perk. Apple will give me $800 for mine in trade versus a $2,600 new one. Even without all of the drama that I am predicting above, there is still a wait of up a month to get one right now. And I am ordering one finally… today. Look to the Future but Buy Now?

I hope that I am wrong with my predictions above. We don’t need World War III when we’ve got real global problems such as climate change. The news about future Intel plants in Columbus is fantastic news for the mid-term. We also might look to other, less politically autocratic nations to develop manufacturing relationships. Want a creative solution? How about Central American countries to build factories in versus China and Asia? That kills two birds with one stone in that Central America is where people are fleeing a bleak future to come to America illegally. A wall is a moronic and one dimensional solution in most cases. Jobs building solar panels, wind turbines and perhaps a really cool AV receiver or powered soundbar might just show those people a brighter future in their own homeland and diversify our ever-increasing need for consumer goods post-COVID.

Again AV friends: if you are on the fence about buying some tech gear… do it now. It isn’t being alarmist as much as it is being aware and realistic. You have been warned of the potential, future problems that we pray are nothing other than meaningless worries. At this stage, they seem pretty real.

Exactly why saying you have a specific version, without all the features, is simply a lie.
AVR Enthu posts on March 24, 2022 03:30

Crazy that we now have a spec that's a numbered version, but for some reason you can be “in spec” if you support some features and most of the bandwidth.

AVR Enthu, post: 1547668, member: 93878
Articifial scarcity is probably the worst reason to buy any new tech gear, unless absolutely necessary, e.g. AVR or speakers died. Plus, we have been experiencing the worst HDMI transition in living memory.

Crazy that we now have a spec that's a numbered version, but for some reason you can be “in spec” if you support some features and most of the bandwidth.

So dumb
AVR Enthu posts on March 23, 2022 17:07
Articifial scarcity is probably the worst reason to buy any new tech gear, unless absolutely necessary, e.g. AVR or speakers died. Plus, we have been experiencing the worst HDMI transition in living memory.
outsiderr posts on March 18, 2022 18:13
There is ,never will be a wall. It is a flimsy cheap, fence. If you want to see a real “wall” go to China.
Post Reply