Receiver Power Consumption Rating vs Output Power Is Not Watt You Think! 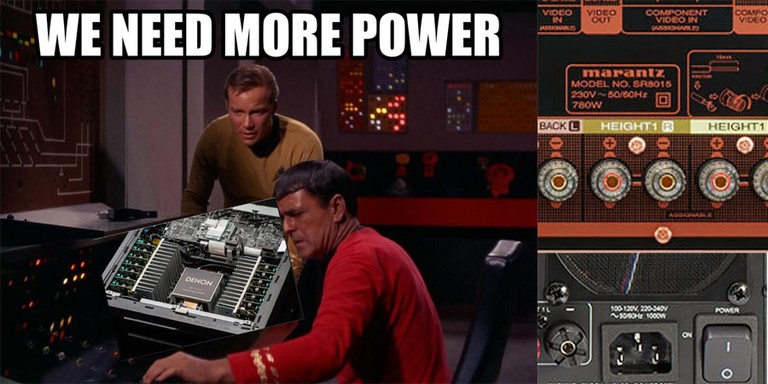 The Power Consumption on the back panel is NOT always indicative of MAX Power!

Ever wonder how your favorite manufacturer rates power consumption on their AV receivers and how it relates to maximum available output power to your speakers? I can't tell you how many comments I've read on our forums or Youtube community alleging dishonest wattage claims based on the back panel power consumption of AV receivers. This article explores this topic to determine the truth. We give several product examples including power calculations which were vetted by the brands for accuracy.

Happy Consumer: No way man, this thing is powerful. I saw a review on Audioholics where its bench test results exceeded the power consumption ratings (like 90wpc x 7). This thing is magic.

Skeptic: Not possible. That would mean it can deliver 630 watts which is greater than the 500 watt back panel rating.

Pursuing the Truth: The truth is, they are both sort of right, but not likely for the reasons they think. Skeptic incorrectly believes 500 watt power consumption rating is a max power rating while Happy Consumer thinks the manufacturer somehow violated the first law of thermodynamics by delivering more power with ACD then the power consumption rating on the back panel.

I emailed our friends at Sound United to inquire about how they rate the back panel power consumption of their products and the answer was very revealing.

What does the back panel power consumption rating mean?

Before continuing this discussion, it's important to note how amplifier efficiency works when determining power produced vs. power consumed. Illustrated below are efficiency curves of a typical Class AB linear amplifier and a switching Class D amplifier. Most AV receivers still employ linear Class AB amplification such as Denon, Marantz, Sony and Yamaha, while some models of Pioneer and Onkyo utilize Class D amplification. As you can see, a Class D amplifier topology is MUCH more energy efficient, especially at lower power levels where the AV receiver operates most of the time.

Let's look at some real world examples of products on the market, to verify the back panel power consumption ratings.

Someone on an audio forum is about to type "But wait, 1307 watts > 10% above 780 watts (858 watts). Yes they are correct, however, this is NOT a violation of the safety standard since the ACD test is NOT considered to be a "normal operating" condition as previously stated.

The AVR-5805 was a 10CH powerhouse receiver topping the scales at 90lbs with a 170wpc x 10 (8ohm rating) power rating. The back panel power consumption is not rated in watts. Instead, it states 13 amps. Denon engineering confirmed to me that this rating was derived using UL1492 testing methods.

We need to convert watts to Amps since the back panel states 13A power consumption.

P = V*I => I = P/V but we also must factor in Power Factor when going from watts to VA which is about 75% for linear transformer power supplies.

The point is, the back panel “power consumption” figure is not always indicative of the device’s actual maximum wattage power output. Many inexperienced fanboy rooters like to think it is, but it often is not. The actual mathematical relationship between “AC power consumption” and actual maximum wattage output of the device is dependent on the amplifier’s efficiency, the duration of the output, the frequency and distortion parameters, and how the manufacturer rates back panel power consumption. It will vary, no question, so don't ASSume.

In my conversation with Sound United engineering, they pointed out that back panel power consumption is usually specified per a safety standard with the most important criteria being a temperature rise test. Safety standards approval agencies will look for the most demanding conditions for each product. To satisfy the temperature rise test, limiting the output in multi-channel driving conditions automatically lowers the back panel rating. As a result, if the power consumption of two Class AB power amplifiers with the same rated output power and same number of channels have different power consumption ratings on the back panel, it's natural to think the lower power rated receiver has less maximum output due to derating to meet a specific temperature safety standard test. It's quite possible the lower power rated receiver has less heat sink area or less ability to dissipate power during long term test conditions.

Editorial Note About Safety Testing:
Sound United engineering informed me they used the UL1492 test method about ten years ago and now they are testing to the IEC-62368 safety standard for their latest products. In between the periods of these two standards, the IEC-60065 safety standard was used. As for the back panel rating, IEC-60065 is almost same as IEC-62368.  IEC-62368 is a newer standard and many safety items (requirement for fire and so on) has been updated.

Editorial Note About Temperature Rise Test:
This test executes in the normal operating condition (1/8th power of ACD) required by the safety standard certification. And the test is necessary at least 4 hours until the temperature reaches saturation. The ACD is measured to determine the test condition. Because it depends on the results of the ACD, it is equivalent to adjusting the normal operating environment.

Under the ACD condition, the absolute test limit values of the temperature rising test are set based on safety regulation standards for the DUT in the abnormal operating condition.

Each manufacturer decides the time and the output level of the ACD using a shutdown mechanism or cooling system based on their respective design policies or their know-how.

The back panel power rating on this particular Pioneer model is interesting. Although I wasn't able to confirm with Pioneer, I assume that the 340 watt rating is based on 1/8th power rating ACD. Since it is a Class D topology, low power drive is still very efficient (around 70%) compared to < 20% of Class AB. In this case, 1/8th power of 140 watts is 17.5 watts.

While exploring this topic, it became quite evident to the author that the industry really needs state power consumption ratings more clearly to the consumer. In addition, I'd like to see the industry move towards Class D amplification in products with high channel densities such as Atmos/DTS:X AV receivers. NAD is one example of an AV receiver manufacturer making the switch to Class D amplification in their AV receivers. As a result, I noticed one of their models, the T778, appears to rate max power consumption as indicated by the 1000 watt back panel rating. If you assume 90% efficiency of Class D, then it's easy to see their 85wpc x 9 ACD is achievable based on this rating. Meanwhile, their older receivers such as the T758 employing linear AB amplifier designs appear to be rated  per UL1492 in VA at a de-rated power level (5A consumption) with all channels driven just like the Denon AVR-5805 example.

Note: I was unable to confirm if NAD T758 meets the IEC 62368 4 hour safety test certification at this power level.

It's not illegal per safety standard to specify a higher back panel power rating than what the product will consume when driven at the 1/8th power test with ACD. It appears the manufacturer can specify their power consumption rating as they choose as long as the number specified on the back panel isn't exceeded by 10% under normal operating condition. IE. A receiver back panel power consumption rated at 1000 watts cannot exceed 1100 watts under normal operating conditions.

We've reached a point now where there are several SOTA Class D amplifier solutions that offer load invariant designs that measure every bit as good as the best Class AB topologies. An argument can be made that SMPS power supplies can be quite costly to implement correctly in order to be free of noise and radiated emissions.  However, an AV receiver manufacturer can very easily make the Class D amplifier switch while still employing their time-tested and proven linear power supplies in current products.

It is our hope that this article serves as a nudge to move the needle forward towards more energy efficient amplifier deployment in AV receivers. Tell us what you think in the related forum thread below.

The only time upgrading electronics will make a difference is if you are going from perhaps 10+ yr old equipment to new… or if the amps are truly underpowered to do the job required.

if your speakers were lower sensitivity with a 45° phase angle at the min impedance point of <4 Ohms at low frequency, you might have a case for an upgrade.

Per VMPS, if you aren’t hearing distortions and your equipment isn’t struggling… put your feet up and enjoy… and fantasize about the next real upgrade.

Thanks guys! I’m getting distortion free play all the way up to reference volume so I guess I’m good for now. Dual Svs pb 2000’s minidsp’d for bass.
ryanosaur posts on November 13, 2020 12:06
What VMPS said.

The only time upgrading electronics will make a difference is if you are going from perhaps 10+ yr old equipment to new… or if the amps are truly underpowered to do the job required.

if your speakers were lower sensitivity with a 45° phase angle at the min impedance point of <4 Ohms at low frequency, you might have a case for an upgrade.

Per VMPS, if you aren’t hearing distortions and your equipment isn’t struggling… put your feet up and enjoy… and fantasize about the next real upgrade.
VMPS-TIII posts on November 13, 2020 11:21

Dan Maldonado, post: 1433136, member: 78502
Yeah these are stable at 4 Ohms. I guess my final question is it worth even getting an amp since they’re pretty good amps on their own even though they’re AVR’s?

What does your ear tell you? Do you hear distortion? Is your receiver running hot?

If you don't hear distortion and the receiver is running fine then why change it? Audiophiles have a tendency to continually upgrade and we don't always know when to simply appreciate what we have.
Dan Maldonado posts on November 13, 2020 10:06

ryanosaur, post: 1433119, member: 86393
Ar 88dB sensitivity they are considered reasonably efficient and 64w should yield ~106dB @1meter. To milk anything more out of your speakers, you would need to double the power to 128w for a +3dB increase, and double again to 256w for another +3dB.
According to Sound &Vision, it looks like the 3 ohm minima has a pretty benign phase angle which means it may be challenging to drive at sustained high SPL but shouldn't be an amp buster… as long as the amp stage is stable for 4 ohm loads.

Yeah these are stable at 4 Ohms. I guess my final question is it worth even getting an amp since they’re pretty good amps on their own even though they’re AVR’s?
Post Reply