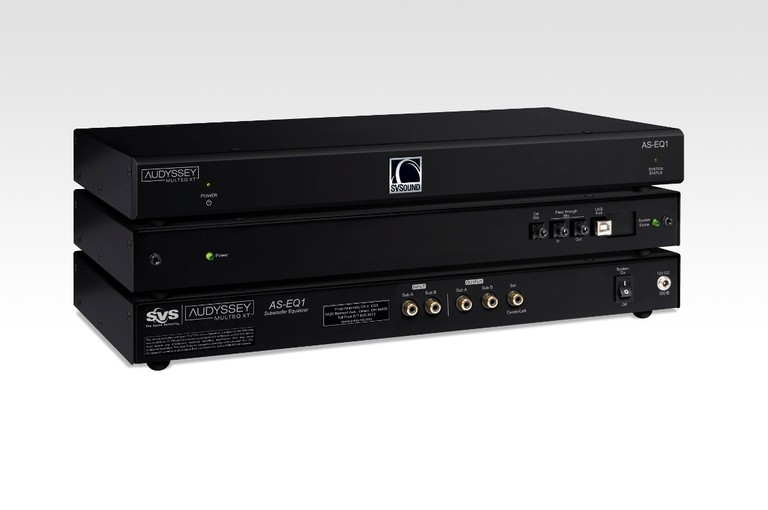 There are so few standalone active room correction systems on the market these days. Those that are available tend to be standalone not only in function but price costing many thousands of dollars. The alternative is usually to buy a sub with some manual correction (like a signal parametric EQ knob), an expensive sub with a more complete suite, or to buy a new receiver every few years. The ones with the really good room correction system usually cost quite a bit of money so again, you're stuck with a substantial investment. Even if you have purchased a receiver in the last few years, the newest ones are coming out with multiple subwoofer outputs which is giving most every audioholic a bad case of upgraditus.

SVS may have what ails you. For a very reasonable (in this category) $799 (currently $699 on preorder) the AS-EQ1 sub EQ is their new standalone room correction system. A joint venture with Audyssey Labs, a name that is becoming synonymous with room correction, the AS-EQ1 offers computer interface, dual subs, and some very interesting aesthetics. The unit sports a magnetic faceplate which covers all the controls and most of the lights. The SVS and Audyssey logos are prominently placed on the faceplate but not the control face underneath. This has your mic inputs and outputs and your USB connection.

Unlike other standalone room correction systems (most notably the Velodyne SMS-1), the AS-EQ1 seems to be taking a different tact altogether. Most room correction systems use parametric EQs - the Audyssey solution uses a system of FIR filters (more info here). In fact, you may be familiar with the particular flavor of Audyssey used by the AS-EQ1 - MultEQ. While they don't specify this, the fact that the SVS version can take up to 32 measurement positions suggests that they are actually using MultEQ XT. This is often found on the very best receivers on the market with only one more "higher end" version of Audyssey available - MultEQ Pro. Receivers with MultEQ XT generally run in the $1000+ range.

With dual sub support, the AS-EQ1 is definitely a forward thinking product. The tweakers in the audience might not be as in love with the AS-EQ1 however as it is mostly an automatic process. Unlike other solutions in the same range, the AS-EQ1 will do most of the work for you - you just have to set up the mic and press "go." What was a slightly odd choice was that the SVS solution doesn't have a onscreen interface. Instead, you have to plug it in to your computer. Not a problem for those of us with laptops (or really long cables) but could discourage some buyers. You're definitely going to want to be aware of this limitation.

SVS makes some pretty serious claims about the AS-EQ1 such as, "In fact, we guarantee it. Acoustical nightmares are cleaned up fast as you can move the included microphone through your room." They are obviously excited by the product and want you to be as well. Ease of use is on the menu as is ease of setup. With two inputs and two outputs, it couldn't be simpler. What's nice is that if you have a single sub output on your receiver and you have two subs, you can plug the input into A and connect both of the subs - the AS-EQ1 will split the signal for you. In fact, if you have two different subs in two different systems you can use the unit to calibrate each separately.

The AS-EQ1 is designed to be used with your receiver/processor's Auto EQ system. If you plan on using it, you connect the receiver/processor calibration mic up to the mic passthrough port on the front of the AS-EQ1 and run the auto calibration. The AS-EQ1 will tell your receiver that a sub is available but will not allow any test tones to the sub. This forces your receiver to calibrate only the speakers and leave the sub to the AS-EQ1. This is extremely handy as it ensures that the AS-EQ1 is truly an add-on bonus and doesn't defeat or make obsolete other (or future) room correction systems. One thing that all users will like is that the AS-EQ1 will provide before and after graphs of your room. This will let you know exactly what the AS-EQ1 has done. If you're still seeing problems, it's time to look into passive room treatments.

SVS most likely has a winner on their hands with the AS-EQ1. We're dying to get our hands on one for review to see just how well it works. For the two channel crowd or people that are waiting for HDMI 1.4 to upgrade their receivers and want an easy to use room correction system, the AS-EQ1 is just what the doctor ordered. It's built to work with existing technology without overriding anything, it is easy to setup and maintain, and it lets you know exactly what it did via pretty graphs. If your mouth isn't watering just thinking about this product, you may have your Audioholics license revoked.

Like This? Check out our other Acoustical Product Reviews!

rmk, post: 652684
Me, I like graphs especially the smooth flat ones my low rez SMS-1 produces. Makes me feel much better about the money spent and in the end, that’s a good thing.

Yeah baby….
rmk posts on November 28, 2009 16:19
No one can produce a graph of what happens when sound enters the ear canal or sympathetically shakes the internal organs of a listener in a room. IMHO, the single point in space measurements and resultant graphs are far less relevant than an experienced listener’s opinion of a product.

Of course one needs to filter these opinions but for me a humans bias and errors are much easier to identify than a microphone, a computer, some software and then the “who’s that man behind the curtain” objective testing many seem so found of around these parts.

Me, I like graphs especially the smooth flat ones my low rez SMS-1 produces. Makes me feel much better about the money spent and in the end, that’s a good thing.
Warpdrv posts on November 28, 2009 14:53
That was one of the reasons I suggested the Behringer DCX2496 right from the get go…

That coupled with a Laptop and REW you would likely spend less money and have all the answers you want as well as the fix in hand.

Yes its a bit more work and learning curve…. so not just plug and play..

I also found out that the more difficult path is the right one in the end… but then again, I have 4 subs to work on, which most people don't and there is no plug and play device that will tackle that gorilla.
Franin posts on November 28, 2009 00:51

gene, post: 652481
If you want to know what is really going on, measure it! Not sure why you would expect an auto eq system to do that for you. If you're happy with the end results, don't worry about it.

Because I thought it would to be honest. Well I have learnt something new, thankyou for that.
Post Reply