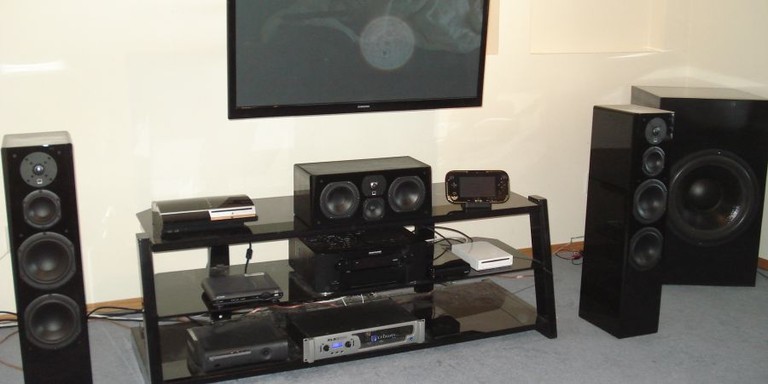 For the average consumer, a grand for a pair of speakers alone might seem a bit excessive when full "HTiB" systems can be had for the same amount; however, for the seasoned A/V enthusiast, the $1,000/pair mark is an important threshold wherein performance becomes a truly positive experience.

The Prime series are Ohio-based SVS’ latest entry into that price bracket, and represent a more budget-friendly product line from the company’s acclaimed Ultra loudspeakers. As was shown in the SVS Prime Series Preview, the lineup consists of a satellite, a bookshelf, a small tower, and a center. Available in either a Black Ash or high-gloss Piano Black finish, the Prime Towers are by most standards a diminutive tower speaker. SVS went with a TMWW design based around a 4” polypropylene midrange featuring an aluminum shorting ring a cast-frame basket. The treble is a beneficiary of trickle-down technology; the aluminum dome tweeter shares its diaphragm and diffuser design with the tweeter from the Ultra line.

The bass is handled by a pair of long-throw 6.5” poly woofers, which also feature aluminum shorting rings. SVS claims over 11mm of excursion, which I presume to be peak-to-peak – that’s really a ton of throw for a 6.5” unit. The Prime Tower utilizes an unusual 3.5-way crossover design – meaning that the lower woofer is rolled off early, effectively contributing in the bass without causing acoustic interference in the blend to the midrange. The tower is rear-ported, so it will expect a few inches of separation from the front wall.

The Prime series’ cabinet shares its aesthetic sense with the upscale Ultra line in its use of angled chamfers. These not only look sleek and futuristic, but along with the neat flush-mounting, serve to minimize edge-diffraction effects in the upper mid and treble frequencies. The midrange driver sits in its own sealed chamber so as not to be modulated by the woofers, and a knock-test revealed a satisfactory thud – a very good sign at this price point. The Prime series’ cabinet shares its aesthetic sense with the upscale Ultra line.

I was excited to give the full Prime front stage a whirl given that SVS has elected to feature a more complex WTMW 3-way design for the Prime Center. Budget oriented lines often use centers with simpler MTM designs, which tend to introduce off-axis response anomalies. SVS implemented a robust 3.5” polypropylene mid unit to cover the critical midband. One might expect limited output potential from the small driver, but it performs with high linearity and great power handling as a result of its large motor structure. The midrange driver is flanked on either side by a pair of 5.25” mid/woofers, which according to SVS have 9.1mm of Klippel-measured excursion. The center is rear-ported, which might make it a question-mark for certain entertainment-center setups, but it’s an otherwise suitable speaker for typical home theater setups at just under 8” tall, and just over 8” deep.

When setting up the Prime Towers and Center, my biggest complaints regarded the center’s feet. Whereas the towers come with pre-attached adjustable carpet spikes, the included 3mm plastic isolation pads on the center seemed like a hassle to install “optionally”. The excellent piano gloss finish almost necessitated some kind of isolation as positioning a center on any entertainment unit generally requires a bit of “crooked portrait fixing” – I don’t think anyone would want to scratch the glossy underside so soon after purchase.

It really is a professional-grade finish, and deserves the dust-every-week / never-let-it-get-scratched treatment. In fact, I’d say fit-and-finish was spot-on – all drivers were perfectly flush-mounted, and the glossy finish was very consistent throughout.