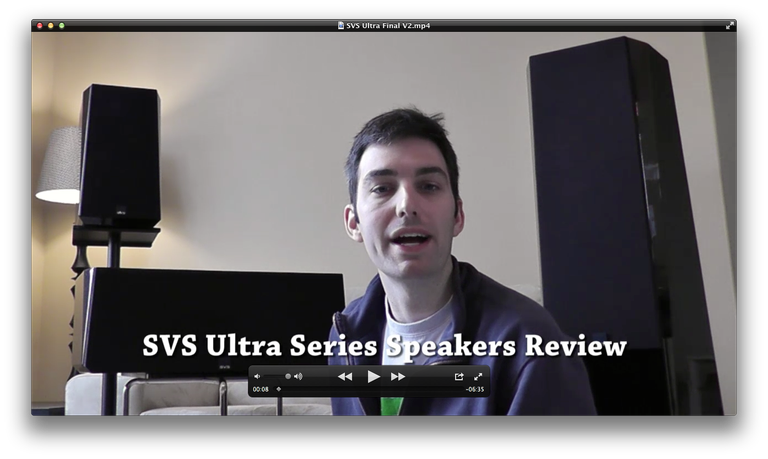 SVS, a name synonymous with bang-for-your-buck subwoofers at a variety of performance points, has re-entered the speaker market with their top-of-the line Ultra Series Speakers. Consisting of 4 models, each of the speakers shares traits such as aluminum tweeters, glass composite mid-low frequency drivers, dual 5-way gold-plated binding posts, and a pin and cup grill retention system.  Each is available in either Piano Black gloss or real Black Oak veneer. You can get an entire 5.0 system in the Ultra Series (no subwoofer) for around $2,699 (with bookshelf speakers) or $3,699 (with towers).

The most interesting and distinctive of the series, the Ultra towers have a striking appearance.  Each stands an imposing 45" tall, with a face 9.5” wide at the front, expanding to 14” where it meets an angled back panel.  This limits the parallel surfaces and reduces internal standing waves that can color frequency response.  Dual woofers peak out on each side of the sturdy, 75lb speaker near the base and provide the foundation of a 28-32kHz frequency response. A rear port can be plugged with an included foam plug for more gradual roll-off at the lowest frequencies.  That may be desirable when placement of the speakers in the room naturally reinforces low-frequencies. Rubber spikes come pre-threaded, though metal spikes are also included. A more compact 2-way version of the towers, each bookshelf shares the Tweeter, 6.5" Driver, and rear-port of the towers in a 19lb package, and digs down to 45hz.  There are no threaded feet in any of the other speakers in the series, but adhesive rubber nubs are included to prevent marring surfaces.

The 3-way center also utilizes the 1" tweeter and 6.5" woofers, but adds a 4" midrange in a vertical configuration crossed over at 500hz to reduce frequency lobing off axis.  Dual rear ports enable a 45hz low-end for plenty of overlap when crossing-over with a subwoofer.

Also in the series is a Surround speaker that can be run as a bipole, dipole, or two individual channels in “Duet” mode.  As my listening space is open, lacking back and side walls, it made more sense to use the bookshelves on tall stands for surround channels in my test setup, and I did not receive this speaker for review.

Receiving the SVS Ultra Series was the first time that I had speakers delivered on a freight pallet.  This meant that they arrived in warehouse condition with nary a dent in the corrugated packaging.  Not that it would have mattered; each was cradled in several inches of high-density foam and bagged.  All could be easily carted solo, with the exception of the Towers, which require 2 pairs of hands, or a lot of determination, to unpack and place.

I did have some trouble fitting one of the tower grills; the culprit was a seemingly mis-set pin which require mild bowing of the grill to set.  A quick email to SVS rendered this response straight from Gary Yacoubian, the CEO of SVS:

“We have a 45 day unconditional satisfaction guarantee and a 5 year warranty on all products. If there were even the slightest issue with any product, or component of a product, we would replace it immediately and without question.”

SVS's customer service before and after the sale remains one of its strongest selling points.  Still, I couldn't help but think that magnetic grills may have alleviated this issue, along with making them easier to remove and presenting a cleaner face.  The drivers’ appearance is quite striking, and the tweeter is “branded” with the SVS logo, so it seems there was consideration for folks wanting to run these "naked”. I did a variety of two and multichannel listening, utilizing both the towers and bookshelves as left/right mains, switching occasionally with my JBL S310ii, all with and without an SVS PB12-NSD subwoofer.  I cycled through a variety of material including an 88kHz/24bit recording of Red Letter Year by Ani Difranco from HDtracks, and Feist's The Reminder.  Without a subwoofer, the towers proved more than capable of producing a full, extended, and controlled low-end.  The bookshelves were also capable, but fared less well by comparison.  In a smaller room, you might get by sans-sub, but the bookshelves really came alive in my larger main-listening room once the PB12-NSD subwoofer was added to fill out the lowest frequencies. Mid-frequencies, such as those present in male and female voices, were clear and natural.  For the center channel, I did prefer the integration of a single bookshelf as opposed to the dedicated center with the tower speakers.  Perhaps the more similar driver complement of the tower and bookshelf integrated better, but I also heard and measured a little more energy in the lower midrange from my listening spot.  For me, cross-screen pans, such as an SUV speeding down an abandoned highway from a recent episode of The Walking Dead, were more seamless with the tower/bookshelf combo, but for folks who need the horizontal configuration, the tradeoff is minimal.

For all the Ultra series speakers, high-frequency reproduction was controlled, natural, and extended, even when pushing my volume levels to the top range of my Onkyo TX-SR706.  Measurement and specs show even response through the upper limits of hearing with their 32kHz response.  By contrast, my JBLs were more lively, but ragged at high volumes, and downright unpleasant when you really start cranking.  At lower volumes, I preferred the more forward and present high-frequency presentation of the JBLs that made cymbals, hi-hats, and tambourines cut through the busy mid-frequencies.  However, when the decibels rise, the SVS's more laid back character and natural response remained composed where the JBLs started to lose control and break-up.  I found this to be the biggest area of distinction between the SVS Ultras and some other speakers I've heard. I personally wouldn't describe them as airy, crystalline, or any other buzzy term tossed around Hi-fi circles.  Instead, I would called them natural and controlled at any volume, which some may find staid in comparison to wild, less neutral, personas like those of the JBLs.

I made the SVS Ultras my primary speakers for several weeks, and after running through every usage scenario that exists in my listening room, my take is that these are beautiful, capable speakers that are also a terrific value.  I find the aesthetics of the towers to be simply gorgeous.  With their tall, sleek faces meeting a broad, angular back, the cabinet design is artful in a way that few $1000 speakers can touch.  However, from a performance standpoint, I think the real star of the show are the Bookshelves. They retained the best of the towers, including composed and natural response even at high volumes, while sacrificing only the lower register in frequency response.  Mated with one of SVS's subwoofers, this becomes a non-issue and at $499 each, you have a beautiful looking and performing system.  In a multichannel system, if your setup allows for the form factor, I think this is the only speaker you need.

While I wished for a more forward presentation at lower volumes, the fatigue-free sound the Ultras produced at high-volumes was a fair tradeoff.  Overall, I think SVS has hit the mark of creating remarkable speakers at a head turning price.  True to their pedigree, the Ultra Series may lack small filigree like magnetic grills, but their performance stands toe to toe with much more expensive contenders.  Coupled with SVS's first class customer service, and Customer Bill of Rights, you can’t go wrong.

Pogre, post: 1177055, member: 79914
I have the Ultra bookshelf speakers with a pair of Hsu VTF-3 MK5's. I'm with Marshall. If money were no object, of course I'd take the towers. They look nice and who wouldn't want more drivers? I'm a little more budget conscious though and went with Ultra bookshelf speakers instead of the Prime towers (~$1000 budget).

Obviously I don't have the towers for reference, but I don't feel like I'm missing anything. These bookshelf speakers can handle 80hz and up just fine and I'm hitting the spl I like (more than enough if I want to continue hearing). The Hsu's take over everything below 80hz quite nicely. I feel like I could close my eyes and hear towers. That's basically what I have, in separates. They have no trouble filling my large-ish room.

They can handle some power and sound amazing even at high volume. This setup is by far the best I've had, and it's good enough that I think I even kicked the upgrade bug (for speakers, I'm not delusional ). Bottom line, I love my Ultras.

Im from the caribbean…I have opportunity to demo the bower wilkins here but not the Ultras..

The SVS i wanna go with is
ULTRAS bookshelf and centre
PRIME bookshelf for surroumd
Normal 5.1 …already have an jl audio e112 sub

Which should I choose…im sure some of you heard both already..I need to make a decision

I'm in love with my SVS Utra speakers. I went with a bookshelf for my center instead of the actual center channel. It's a better timbre match, I have the room for it and saved me a few $.

I don't have much experience listening to the B&W speakers you're looking at, but I can say that B&W's upper range high dollar speakers have blown me away, but their entry-mid level speakers not so much. I prefer my Ultras over what I've heard (with the exception of the 802 D3's I got to listen to. They really were amazing, but very costly).
Glanimal786 posts on April 01, 2018 15:51
And last call..

Too many options..im going crazy

All is around the same price range overall

And all i can demo is the bowers
Post Reply