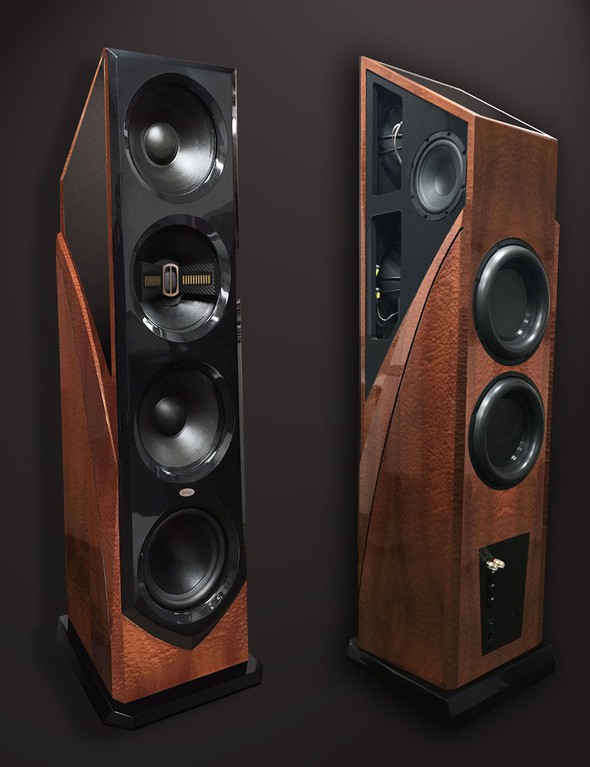 r manufacturer Legacy Audio has recently pushed what is considered state-of-the-art a bit further with the announcement of the Valor, their latest flagship speaker system. The Valor is an 11-driver, 4-way behemoth weighing in at 288 lbs and driven with 2,750 watts of onboard amplification. However, it is not simply a large and powerful speaker. The acoustic output is very carefully controlled, not only by the driver layout, but also the electronics that come with it, namely the Wavelet processor.

The physical design of the Valor is a strategically placed arrangement with each component serving a controlled purpose. Let’s begin with the driver placement starting from high-frequencies and going down to low frequencies. The Valor uses two AMT tweeters for frequencies above 6 kHz. Each is “bridge-mounted in a post-convergent array” according to Legacy’s literature. The AMT tweeters are horizontally flanking the throat for a 2” titanium/polyester diaphragm compression driver. The compression driver is for midrange frequencies and is mounted concentrically in a 14” midwoofer, with the AMT tweeters mounted parallel on the cone walls of the midwoofer. This is a post-convergent array where, in the words of Legacy’s chief designer engineer Bill Dudleston,

“The radiation of these cross-firing tweeters converge with the radiation from the mouth of the co-axial wave-guide in a timely manner. As this acoustic coupling happens in the very near proximity the listener is in a "post-convergent position" as opposed to pre-convergent or divergent as in the rays of Don Keele's excellent CBT design.”

Another advantage of this tweeter layout is that the angle of sound that is emitted by the tweeters does not become an extremely narrow beam at very high frequencies as is so often the case with conventional tweeter designs.

The 14” midwoofer is mounted in an open baffle for a dipole dispersion pattern. The 14” bass driver above the 14” midwoofer is also open to the rear, but the 14” bass driver below the 14” midwoofer is enclosed. The open and closed bass drivers are an effort to create a supercardioid dispersion pattern within their 65 Hz to 800 Hz bandwidth, where one side of the speaker’s acoustic output becomes reduced through cancellation but the other side get the full force of the output from both drivers. Deep bass is taken care of by two 12” subwoofer drivers powered by 1 kW of amplification and two 12” long-throw passive radiators.

There are also three wide-range 8” drivers mounted on the sides and rear of the speaker that Legacy calls the ‘ambient array.’ They reproduce the ambiance from the recording as late reflections in-room.

One of the main ideas behind this speaker is to separate early reflections from the direct sound and late reflections. Legacy claims that early reflections from the walls, ceiling, and floor can smear the direct sound that can mask spatial cues which will degrade the imaging. The design of the Valor is such that the dispersion pattern is tightly controlled so that output at angles that contributes to early reflections is greatly reduced. However, late reflections can add a sense of spaciousness, so a challenge in designing the Valor was to reduce early reflections without eliminating late reflections. Here, the dipole pattern of the 14” midwoofer helps, as well as the three 8” wide-range drivers. The 8” drivers are dedicated and positioned so that the sound they emit will arrive at the listening position as a late reflection. They are mounted on the sides of the speaker and also at the top rear. The sound that they produce does not hit the listener directly but reaches the listener as reflected sound from distant room surfaces such as the rear wall behind the speaker. Central to the Valor’s mission to reduce early reflections in favor of late reflections is achieving a tightly controlled directivity for the forward sound emission. In simpler terms, this means that the sound projected by the front of the speaker needs to stay in a relatively narrow angle so that the listener hears more of the sound coming directly from the speaker rather than early reflections of the forward sound bouncing off the walls, floor, and ceiling. One way that Legacy accomplishes this is the use of very large cone drivers for midrange frequencies. 14” drivers will not project midrange frequencies at a wide angle since the radiating surface of the cone is quite large compared to the wavelength of the frequencies it is tasked with reproducing. Furthermore, the use of an open baffle mounting for the 14” midwoofer creates a dipole radiation pattern where the rearward motion of the driver cancels out the sound produced by the front of the driver at lateral angles, so the sound is only generated in a relatively narrow forward and backward angle.

Another advantage of these large-cone drivers is a generous amount of headroom, so the Valor will be able to retain a clean sound at extremely loud levels. Along with high dynamic range, Legacy claims quite deep extension, with high output capability down to 18 Hz which is a very plausible figure given the subwoofer section of the speaker.

The physical design of the speaker is not the o nly method that the Valor uses for creating a high-fidelity sound. The Valor comes with a sophisticated 56-bit processor called the Wavelet.  The Wavelet handles crossover duties, digital-to-analog conversion, preamplification, bass equalization, and a new processing technology that Legacy calls ‘Stereo Unfold.’ Stereo Unfold is how Legacy tailors the Valor speakers to the room they are in. After the Valor is situated in-room, a microphone is placed in front of the speakers at a 4’ distance. In Bill Dudleston’s words,

“The microphone is measuring the fluctuations in radiation impedance on the path to the listener as energy rebounds from walls, ceiling and floor over 500ms window as it sweeps from 10 Hz upward to 20kHz. Correction is computed and applied in the time domain over the first 30-40ms.”

In other words, The Stereo Unfold process looks at the difference between the time arrival of the direct sound from the speaker and the time arrival of the acoustic reflections and attempts to correct for that difference for a more synchronous sound. By properly aligning the acoustic reflections with the direct sound, fluctuations in the frequency response then automatically become smoother. This is different from most room correction routines which merely measure the response at the listening position and use filters to equalize the response to fit a target curve; this can only address certain problems some systems can have and sometimes only help for a single listening position.

Legacy Valor Pushing the Envelope of State of the Art?

The Legacy Valor speaker system is an all-out attempt to push the state-of-the-art forward with few compromises, and it is priced as such at $80,000. The pricing, not to mention the size and weight of these speakers, means that only a lucky few will be able to make a home for them, but those who do will have a sound system that will be nearly unmatched in technological sophistication and engineering. You do have to take into account that these speakers come standard as fully amplified, so no outboard amplification is required unless the customer opts to power the treble range externally with their favorite amplification. Most preamp functions are taken care of by the Wavelet as well. It is nearly a complete system; just add a source player. The Wavelet can be controlled by an app for Apple or Android devices. Furthermore, this is a system that is designed to work best in normal room acoustics and does not need the assistance of acoustic treatments. In fact, passive absorptive room treatments on the sidewalls to reduce reflections is not recommended by Legacy. The Valor is available in a variety of finishes and degrees of customization from the buyer. They can be purchased from Legacy’s network of domestic and international dealers.

Read the Complete Thread
MrBoat posts on December 06, 2017 02:09
I actually liked the presentation and the approach, which amounts to the $80k millennial designer version of something that has been known for many decades by now with regard to stereo soundstage and room modes. Of course there is a variable poor man's approach to much the same end. With the ‘variable’ of course being dependent on the quality of drivers one chooses. The other caveat being that the ever present and often overbearing “WAF” would have to be kicked to the curb as well.

Impressive is the type/size of the drivers and their function. I was actually surprised and happy to see this. Hat's off to Legacy for going there.
mtrot posts on November 27, 2017 19:57
Those babies do look sweet! But I wish Legacy would sell a passive version of the Aeris. I really like the mid woofers in the Aeris, but trying to integrate the Aeris into my AVR based system would not be easy because of the way it is designed. So, now I'm looking at the Focus SE or Focus XD.
gene posts on November 27, 2017 01:04
jOICDcbFB_c
gene posts on November 27, 2017 00:53
Legacy's latest flagship product, the Valor, is a speaker that pushes the state-of-the-art in high-fidelity further than ever before as a 2,750 watt, 11-driver behemoth that is packed with the latest advances in audio engineering. The sound from the Valor is tightly controlled so interference from room acoustics is greatly reduced, and imaging from the original signal is preserved with greater clarity. The methods used by Legacy to reconstruct the original stereo image go well beyond traditional room correction equalization. Read our preview and watch our YouTube Video of the Legacy Valor to find out more.