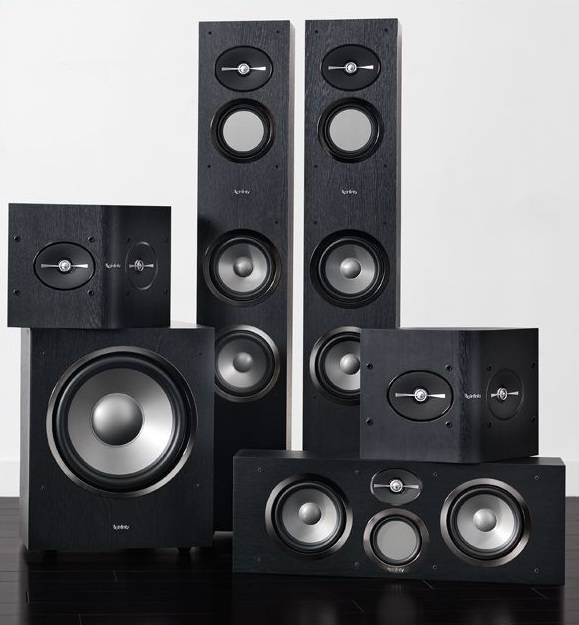 It has been some time since we here at Audioholics have heard anything significant from Infinity.  A long enough time had passed that I was personally beginning to wonder if Harman was casting the brand adrift, at least as far as the home audio market was concerned.  Nothing significant has happened in the lineup since the Classica, the last midrange speaker line Harman brought to market under the Infinity marque, and the higher end offerings such as the Kappa series and the Preludes disappeared sometime around the middle of the last decade.

In fact, the only remaining Infinity home audio product for the last several years has been the bang-for-the-buck budget Primus line, which occasionally received some tweaks and revised cosmetics along with new model numbers every so often.  In fact we reviewed the Infinity Primus P363's very favorably but were hoping for products with higher aspirations.

Well it seems that Harman is finally ready to make a significant move back into the home audio segment with the eminent release of the new Infinity Reference series loudspeakers.  The new lineup consists of two models each of tower, bookshelf, and center channel speakers, a surround model, and a pair of subwoofers.  All of the new models host a number of features from Infinity’s research and development efforts, with a mix of both tried and new technology.

The driver diaphragms use Infinity’s Ceramic Metal Matrix Diaphragm (CMMD) which has been their go to material for some time now.  CMMD is a ceramic metal composite consisting of an aluminum core anodized to create a ceramic alumina skin on the outside surfaces, which is intended to provide both improved stiffness and damping characteristics while keeping the cone mass low.  CMMD was originally developed by Infinity for their high end Preludes, then making its way into the higher end Kappa series, and subsequently to a number of midrange products such as the Beta, Cascade, and Classica speakers over the better part of the last decade.  For those readers familiar with the entry level Primus line, they utilize a variant of this material referred to as MMD, which is basically the same material, but with a thinner ceramic skin on the aluminum, hence the C dropped from the acronym.

Infinity addresses off axis frequency response issues with a number of the design elements used in the Reference series.  The dome tweeters are mounted in a newly designed wave guide that continues Infinity’s ongoing development efforts in this area.  The refinements found in the design of the waveguide are said to provide improved high frequency dispersion.  Additionally, the dedicated midrange drivers used in the three way speaker models are of a flat piston type, which  Infinity cites as reducing diffraction at the high and low frequencies of the driver operating band.  This design likely draws on the work done by Infinity in developing the Cascade series which featured flat diaphragms for all the drivers but the tweeters.

Infinity also makes mention of the amount of analytical design efforts put into the speakers.  Infinity not only takes pains with computer modeling for the design of the cabinets, but also for the placement of the drivers in the cabinets to make the mechanical components work together synergistically.  The crossover networks were also designed to optimize their performance in the system.  Some of the results of these efforts are visibly noticeable in the cabinet design of the towers where the midrange and tweeter are grouped and positioned away from the woofer compliment.  Similar driver arrangements have surfaced in loudspeakers from other heirs of NRC research with one example being the middle era Energy Veritas towers.

The accompanying subwoofers introduced with the Reference series make mention of a Slipstream tuned port technology.  While Infinity does not elaborate beyond the name, this is likely design of the port to minimize turbulent airflow around the port openings during high velocity air displacements.  In more common terminology, this is likely to minimize port chuffing noises that can occur when a sub is being driven hard near the resonant frequency of the tuning port.

Starting with the bookshelf models, the R152 and R 162 are both two-way ported designs each with a 1 inch dome tweeter mated to a 5 ¼ inch and 6 ½ inch mid/woofer, respectively.  The R253 and R263 towers are both three-way designs featuring a 1 inch CMMD dome tweeter and a 5 ¼ inch flat piston midrange that is housed in an acoustically isolated chamber.  Both towers also have dual woofers, but differ with 5 ¼ inch woofers in the smaller tower and 6 ½ inch woofers used in the larger tower that are also constructed using Infinity’s CMMD as a diaphragm material. The center channel offerings are split between a two-way and a three-way design.  The two-way RC252 uses a 1 inch CMMD dome tweeter flanked by a pair of 5 ¼ inch CMMD woofers.  The three-way RC263 also uses the 1 inch CMMD dome tweeter stacked above a 4 inch version of the flat piston midrange found in the towers, isolated in its own chamber and flanked with 6 ½ CMMD woofers.  Both center speakers use a sealed enclosure design for easier placement against flat surfaces such as against an HDTV bezel. The Infinity Reference RC252 (top) and RC263 (middle) center speakers, along with the RS152 surround speaker.

The surround speaker, the RS152, is a sealed enclosure two-way speaker design.  The wide shaped cabinet has drivers on three sides, a pair of 1 inch CMMD dome tweeters on each of the forward facing angled cabinet walls and a 5 ¼ inch rear firing woofer on the back face at a specifically positioned distance from the supporting wall.  Infinity refers to the configuration as Hemispherical Soundfield Technology (HST) which they say provides very even frequency response coverage over a 180 degree listening area, thus creating a speaker with flexible placement options that should have minimal effect on the speaker’s acoustic performance.

The powered subwoofer offerings come in 10 inch and 12 inch flavors, the SUB R10 and SUB R12, utilizing tuned port enclosures with 200 watt and 300 watt RMS class D digital amplifiers, respectively.  Power output specifications for the amplifiers shows a doubling to 400 watts and 600 watts under short term dynamic conditions.  The driver diaphragms used for the subs are made from an unspecified fiber composite material, which is likely some form of a fiber reinforced variant of the CMMD material used throughout the line.  The cabinet is said to consist of 0.75" walls, with edge-to-edge windowpane bracing utilized to stiffen the enclosure. Controls for the subwoofer amplifiers included the standard adjustable level output, crossover frequency, and phase along with auto on/off sensing and a LF trim control that allows up to a 4 dB boost at 35 Hz.  I am assuming that there is a trim frequency associated with the LF trim control, but it is not specified in the literature that Infinity provided. A few items of note in the specifications for the new Reference loudspeakers.  The towers and the center channel speakers operate at a 6 ohm nominal impedance.  This means that they will suck more wattage out of a receiver than they typically might be used to supplying for conventional 8 ohm speakers.  The speaker line overall has an average voltage sensitivity, which is a little lower than what typically shows up in mass market offerings.  The smaller bookshelf and center speakers come in at 87 dB at 1 m driven at 2.83 volts while the larger tower and surround speaker gets up to 89 and 90 dB, respectively.  Between the sensitivity and impedance ratings, the Reference series may require a little beefier amplification to get the most out of them.  With speakers of this caliber, you're gonna want to feed them some great amplification.

For those readers who are versed in company’s history, Infinity has a long made use of the term Reference in a number products introduced over the years.  The Infinity Reference Standard (IRS) of yore was an extreme, cost is no object design that rivals the most esoteric products ever brought to market.  The only recent offering under Harman’s ownership to approach that level would be the likes of the MTS Preludes.  On a more reasonable level, Infinity also offered the Reference Standard (RS) series sold alongside the Studio Monitor (SM) series of speakers around the time they were acquired by Harman.  Infinity has chosen a name for the new speakers that might seem pretentious from a certain point of view, but I find it likely that Infinity is looking to draw on the perception of quality associated with these historical lines, which with recent offerings will likely be high relative to the asking price.

Based on what I can see, the new Infinity Reference line certainly seems to have the type of thoughtful, high value to cost engineering that Harman typically brings to bear and makes it seem like they may finally be getting serious about Infinity again.

Read the Complete Thread
j_garcia posts on July 21, 2014 11:44
A rear firing midbass that uses the wall for diffusion but the tweeters point out for cleaner dispersion of highs? Interesting design on the surround speaker and now I'll have to check those out. Depending on price, I'll probably pick up a pair of the bookshelf speakers and give them a rundown.
Bebe14 posts on July 21, 2014 10:25
Very interesting! This review is very interesting and well written…and these products made me think about the loudspeakers produced by Italian company Sonus faber. Do you know it?
slipperybidness posts on July 11, 2014 09:21
Seems like pretty much the same model naming convention as the Primus line. I like consistency within a make of speakers, makes it easier to remember.
Post Reply