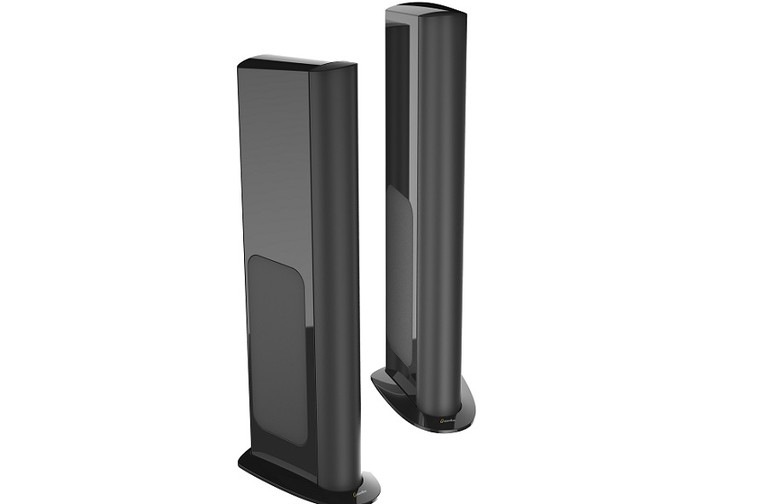 Last year at CES in Las Vegas GoldenEar Technology won the prestigious CES Innovations Design and Engineering Award for their release of the Triton Reference tower speaker.  To expand upon their innovative speaker design GoldenEar announced the introduction of the new Triton One.R. This extraordinary new reference quality loudspeaker is a smaller, less expensive follow up to the Triton Reference. The Triton Reference has had a remarkable response in the marketplace from both music and hifi enthusiasts alike.

The goal of the Triton One.R project was to bring the advanced technology, luxurious cosmetics and state-of-the-art performance of the flagship Triton Reference into a more compact and less expensive speaker.

The Triton One.R has a monocoque cabinet that is constructed of multi-density medite, engineered with the goal of making it as non-resonant and inert as possible to help eliminate extraneous vibration that could detract from the sound of the drivers. To do this, an elaborate system combining bracing and damping pads, optimized with the use of an accelerometer-generated cumulative spectral decay analysis, is utilized. The baffle is as narrow as possible, minimizing diffraction issues, which is effective in helping to make the cabinet disappear, both sonically and visually. The sides of the speaker are not parallel, in order to minimize internal reflections, which again, helps purify the sound. Similarly, the separate, internal enclosure that houses the upper bass/midrange drivers is designed with no parallel walls, for the same purpose. The chamber is filled with an inert mixture of Dacron and long  fiber wool in order to critically dampen it. The Triton One.R  has an integral built-in high-powered subwoofer for better bass management with the rest of the loudspeaker. The Triton One.R uses a 56-bit DSP to dramatically flatten and extend the low frequency response.

here are three newly designed racetrack shaped active subwoofer drivers on the front of the cabinet, which have special polymer impregnated nomex cones, in order to minimize cone breakup when the speakers are pushed hard. Huge magnet structures are utilized in order to better control cone movement and improve transient response. There are four quadratic planar infrasonic radiators. They extend the low frequency response and are inertially balanced (two on each side) that according to Goldenear minimize cabinet movement, resulting in clearer, more detailed sound. The High Velocity Folded Ribbon tweeter, the same as used in the Triton Reference, is a new design that incorporates 50% more neodymium magnet material than previous units, for higher efficiency and greater control. The folded ribbon technology combines improved impedance coupling to the air of horn drivers for greater efficiency. The two 5.25” upper bass/midrange drivers are also new, incorporating a special formulation of polypropylene which combines increased internal damping with a high speed of transmission through the cone. A unique "balanced" crossover, with a floating configuration, places components on both sides of the drivers.  Very high-quality bridging capacitors, used in the Triton Reference, are also found in the Triton One.R.

The $6,000/pair Triton One.R is currently shipping and with all the new innovations and attention to detail audiophiles would be hard pressed to find a better tower speaker with built in powered subs in this price range. Although this price definitely eliminates some buyers from even looking twice at it. Realize that everything from the internal speaker wire, quality drive units and crossover components, to the critical measurements conducted in their own large-scale anechoic chamber, as well as long listening and voicing sessions in the listening room with all kinds of music have been painstakingly worked on to mirror that of the Triton Reference. In this case, you are getting what you pay for...and then some.