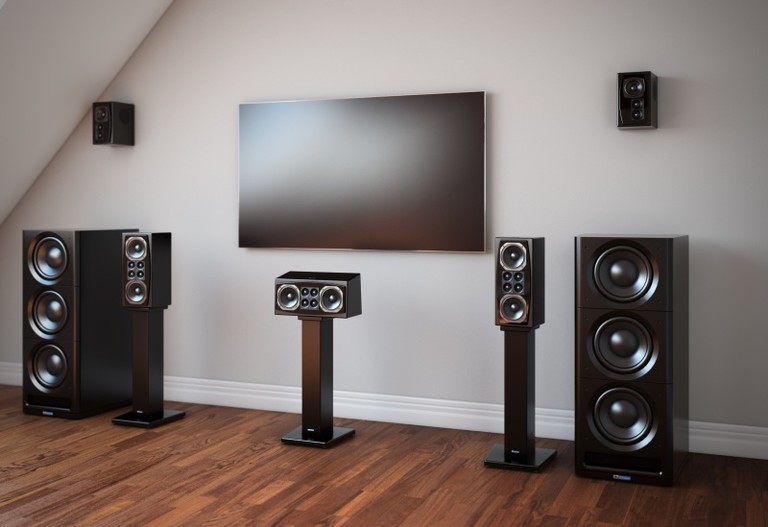 There is a growing buzz around XTZ Sound. The Sweden based hi-fi company describe itself as “a border-crossing network of engineers, technicians, manufacturers, and producers” that manufactures speakers in Sweden and Asia, and sells them direct around the world. The latest products from XTZ are their Cinema Series M6 hybrid 2/3-way satellite LCR and S5 dipole speakers.  The $1000 M6 and $700 S5 were designed for high-output, low-distortion, and accurate response. They feature a unique driver configuration, a compact, yet solid cabinet design, and superb attention to detail at a very attractive price.

I was sent three M6 speakers for main and centers, and two S5 for surrounds.  Opening the box, other than the individually cloth bagged speaker and magnetic grill, one will find the neatly packed manual, magnetic logo badge, and rubber feet, along with a pair of white gloves to separate your greasy mitts from your new speakers.  The gloves also work great for debutante balls.  Unfortunately, my corn-feed Iowan hands were a bit larger than the dainty gloves, so I apologize to XTZ, but you'll be getting some fingerprints back with your speakers.

Fortunately, the flawless matte black finish does an admirable job of rejecting fingerprints, dust, and light.  Sure, a piano-black, wet-look finish is always a head-turner, but this is a cinema system, and the XTZ speakers still look good while being functional and not directly reflecting light from your display back at your eyes.  The magnetic grills are very sturdy, constructed on a nicely-finished wood frame; no rough edges or plastic here.  As mentioned, the logos are also magnetic, so you can mount them on the top, bottom, or side of the grill, in any orientation, or leave them off completely. Looking at the main/center M6, you'll see the cabinets are asymmetrical with only two parallel sides. This not only combats standing waves within the cabinet; it allows you to flush mount the speaker on a wall vertically or horizontally using XTZ's optional flush wall mount, and still have a slight amount of toe-in or aiming with the angled front baffle.  Of course, you can also use the available matching stands.  The M6 also serves as the system’s center channel, and oriented accordingly can have the front baffle and drivers angled up or down towards the listener.  These speakers are sealed designs, meaning they don't have any ports that need to be kept away from walls, and the bottom of their frequency response will drop off more gradually. In this case, the low end reaches 75hz +/-3dB, making the M6 perfect to cross over to a capable subwoofer. The cabinets themselves are manufactured with High Density Fiberboard, which is stronger and harder than MDF.

“Nobody.”  Seriously, these are very non-resonant cabinets.  Where some speaker cabinets sound like you’re knocking on a thin-walled, hollow box, these sound like a solid piece of wood.  A solid box means the resonance of the enclosure won’t be coloring your speaker response, and at almost 20lbs each in a 17 by 9 inches square, the M6 are remarkably stout, despite being relatively compact. The driver configuration is probably the most unique thing about the M6.  There are many speaker designs that feature a single tweeter flanked by two woofers, often called a D'Appolito array, but the M6 have not one, but four, 1” tweeters.  I asked Dan Roemer at InterSource OEM which also does business as Claridy Audio, who designed the XTZ Cinema Series speakers together with XTZ, “what’s up with the 4 tweeters?” XTZ M6 Fresh out of the box with 4 tweeters

Dan detailed a number of potential problems that using multiple tweeters works towards solving.  For one, using multiple tweeters shares thermal loads allows for a lower crossover point to the woofer, reducing distortion and beaming of mid frequencies.  The crossover frequency is lowered to 1.2kHz, which Dan notes is right around the area below which our brain uses phase to determine directionality, and above which uses amplitude.  Where a woofer at 2-3kHz might be very directional, a tweeter can be more omnidirectional, allowing for a more even dispersion in this critical band.

One of the problems in using multiple tweeters in close proximity to one another is that they can cause interference with each other, and that’s the main reason people wrinkle their noses at this approach.  However, Dan has a way around that.  He doesn’t run all 4 tweeters all the way to 20kHz.  Instead, 3 of the tweeters are rolled off at 3kHz, and just one of the domes takes over.

As you’d expect, the design cues from the M6 are carried over to the Hybrid 3 way XTZ S5.  The S5 has a similar multi-tweeter design featuring two, 1” tweeters; (both operate from 1.2kHz on up).These are paired with a 4”mid-woofer on the front face, and the non-parallel sides each feature a single, 3” full-range woofer.  They are again quite dense at 16.5 lbs and 11 inches tall by 8 inches deep.  If you’re looking to hang these on a wall, you’ll definitely want to consider the sturdy XTZ flush-mount bracket. The XTZ S5 and its versatile 3-array design

With three different wiring configurations, the S5 speakers proved to be a very versatile surround speaker.  When it comes to surrounds, some people choose monopole, or direct-firing, speakers for surround use.  These offer a very balanced frequency response, but can be easy to localize making all the surround effects sound like they are coming from a single point on your wall.  For folks looking for a more diffused sound, where surround effects seem to be coming from the sides and behind you, but you can't tell exactly where, they often choose bipole or dipole speakers.  The S5 takes a swing at being the best of all worlds.  With various configurations of wiring the 4 binding posts using the included metal jumper/bridge, you can configure the speaker for one of three modes:

For the record, my favorite in my setup was the “Dipole 3x”, with just the right hint of diffused sound, but your taste may vary.