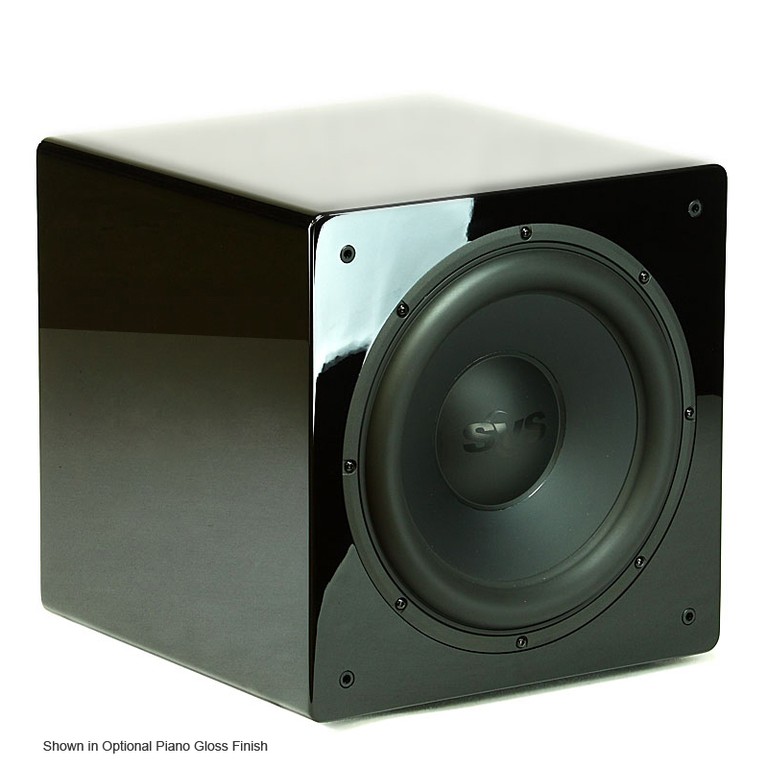 As the smallest subwoofer in the entire SVSound lineup and also the one requiring the least amount of cash outlay to own, one might reasonably expect that the SB12-NSD would exhibit a few tradeoffs in its performance. However after spending a few weeks getting intimately acquainted with the review unit provided by SVS, we found very little to gripe about and a whole lot to like. The SB12-NSD makes use of a proprietary 400w class D Sledge amplifier and 12” aluminum cone driver in a tiny sealed cabinet to produce satisfying and exceptionally well rounded bass reproduction, at reasonable cost and with very little floor space occupied in the process. At the end of our term with the SB12-NSD we came away impressed with the overall build quality, look and behavior of this small sealed unit. Highly Recommended.
Next Page ⇨

the CEA-2010 measurements presented here are taken at 2 meters outdoor groundplane and are “rms” not peak values. This is equivalent roughly to a 1 meter anechoic (free space) SPL measurement.

The indoor SPL levels are considered to be a corner loaded subwoofer which puts the sub in 1 meter 1/8th space which adds +18dB over a 1m anechoic (free space) measurement. We are considering the listening distance from the subwoofer as being roughly 4 meters in most cases which drops the spl by 12dB (18-12= +6dB at this point.) A peak SPL report of the same signal reported via an rms calculation method will produce about 3dB higher numbers. (Add 3+6= +9dB) So that is why we are adding 9dB to the reported CEA-2010 numbers to compare them with the indoor peak SPL numbers required.

Note that if a sub just barely misses in one frequency band by a single dB or less, for example falling short by 0.7dB at 31.5Hz only, we will go ahead and give it the benefit of the doubt as long as it meets the other criteria since it is a drastic 6dB drop back to the next smaller room size.
mpstein posts on August 23, 2012 11:58
Mike,
I'm sorry but now I'm a little confused on this issue as well.

From what I understand, the sb12 scored a raw score of 96.3db at 25hz. From there, are you adding in the +12db from putting it in the corner as well as adjusting it +6dB for the conversion?