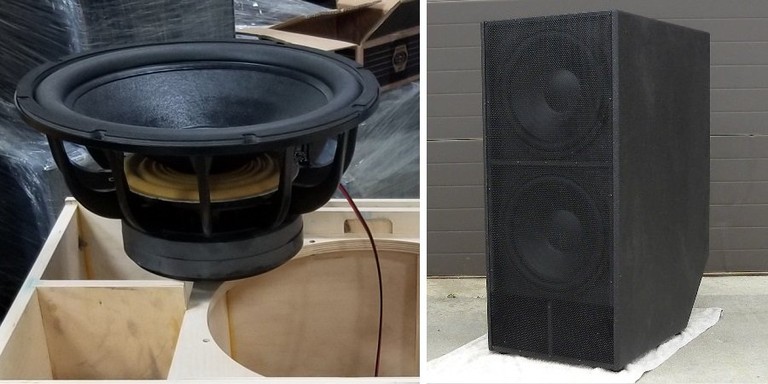 Audioholics recently went out for a scenic drive to sunny Wisconsin, and along the way we decided to make a stop at JTR Speakers to test a few of their subwoofers. Anyone with even the vaguest knowledge of JTR Speakers will know that their subwoofers are pretty extreme regarding performance, and one sub that we tested which had absolutely pulverizing performance was the Captivator 215PRO. The JTR Captivator 215PRO is not a home audio subwoofer but is meant for large venue sound reinforcement that you might find in large clubs, auditoriums, or outdoor concerts. The demands of pressurizing such large spaces with low-frequency pressure waves are much greater than that of any domestic listening environment. These subs are exceedingly powerful and are often used in large sets of subwoofers rather than a single sub. Audioholics doesn’t normally deal with pro-audio stuff like the Captivator 215PRO, but the experience of testing this thing was so extraordinary that we had to report on it. The Captivator 215PRO uses two high-sensitivity 15” drivers that have a one-way linear travel of 19mm which is a pretty substantial amount of throw for a 15” in the pro-audio world. The drivers are mounted in a large, slot-ported cabinet that has built-in handles and a rugged Line-X coating. Casters are built-in at a cabinet angle for easy transportation. The 215PRO can be had in either a passive or active version. The active version comes with a 2,400 watt RMS amp. Obviously these drivers can handle a ton of power.

On a crisp May morning (weather recorded at 50 degrees Fahrenheit and 63% Relative Humidity), we set our mic up at a 2-meter distance from the sub and calibrated it with a 20dB attenuator since our regular measurements system didn’t have enough dynamic range to accurately record the full force of the Captivator 215PRO. The above graph shows the measured frequency responses for the Captivator 215PRO subwoofer with changes to the response that can be made with the LF Adjust knob. We see a nicely flat response that can be made to emphasize or deemphasize deep bass depending on the LF Adjust setting. What is advantageous here is that many pro-audio subs intended for PA-type systems do not normally dig this deep. Many of them rapidly roll-off below 40 Hz whereas the 215PRO has a strong response to below 30 Hz. That makes the 215PRO a good choice for music genres that can have deep bass such as electronic music subgenres like dubstep or drum’n’bass. The above CEA-2010 measurements are short-term bursts that show the subwoofer’s clean peak SPL before heavy distortion sets in. Our measurements have been referenced to 2-meter RMS, which is 9 dB down from the standard requirement for the measurements to be shown at 1-meter peak. However most publicly available CEA-2010 measurements are shown at 2-meter RMS, so we followed that convention. From these measurements, we can see massive output from 25 Hz and above, averaging a staggering 127 dB above 40 Hz. That is just huge output, and it was nearly concussive to test since I wasn’t that far from the sub when running these test tones. This is well into the ‘chest-punch’ territory of SPL, and if you are close enough to the sub at those output levels, this is ‘ribcage-bruising’ territory. This easily breaks all records for mid-bass output for any subwoofer tested by Audioholics. If we are to give it a bassaholic room size rating, this easily secures an ‘Extreme’ room rating (meaning the sub is suitable for 5,000 cubic foot rooms); in fact, you could half the headroom of the Captivator 215PRO and it would still easily secure an ‘Extreme’ room rating, but that isn’t surprising since it was designed to pressurize much larger spaces than is found in a home. Brutal! Testing for long-term output compression was done by first conducting a 20-second sweep tone where 50 Hz hit 90 dB with the subwoofer 2 meters from the microphone. We then conduct further 20-second sweeps by raising the gain by 5 dB until no more output could be wrung out of the subwoofer. These tests show us the long-term continuous headroom that the subwoofer is capable of. We can see that the Captivator 215PRO is capable of a continuous 125 dB from 40 Hz to 160 Hz. That is very good for live sound subs with such a deep tuning frequency and absolutely monstrous output relative to the subs that we normally deal with here at Audioholics. If I tried to run any sub at these loudness levels in a residential neighborhood I would earn a noise citation from police within 5 minutes. Compression behavior is quite good with not much of a response shape change from nominal output levels to maximum output levels. The above graphs show the corresponding total harmonic distortion to the long-term output graphs. Essentially, they depict how linear the subwoofer remains for the corresponding drive level seen in the long-term sweeps. The quantity being measured is how much of the subwoofer’s output is distortion and is shown here as a percentage. Again, a solid showing here and indicative of good engineering. Harmonic distortion pretty much stays below 10 percent within the sub’s intended range above 25 Hz until the last couple dB.  Keep in mind that the lowest sweep here is the 110 dB tone. If you try to drive this sub past 125 dB distortion does spike to 20% from 50 Hz to 60 Hz, but that is the very edge of the 215PRO’s performance envelope. The highlight here for pro-audio shoppers is just how clean and unchallenged this sub is from 30 to 40 Hz, where many other common pro-audio subs would coughing up blood if attempts were made to drive them that loudly in such deep frequencies

As was mentioned before, Audioholics doesn’t normally cover non-home audio products, so let’s discuss the possibilities of using the Captivator 21 5PRO inside of a home. First of all, it is very large and heavy, and it is not very pretty. It has a very durable Line-X coating that you typically see on outdoor equipment. If you can get past the looks or if you can hide it behind an acoustically transparent screen, it has insane performance. It has a nicely linear response and extremely low-distortion, so despite its crude appearance, it is high fidelity device.  It does come up a bit shy in deep bass for home theater applications, and its low-frequency extension doesn’t quite match what can be had from many manufacture direct subs that specialize in deep bass, including any of the home audio subs from JTR. However, its sub-30 Hz extension is not bad, and that will catch most bass content in movie content and nearly all musical bass. If anyone used these in a home environment, they could be looking at 135 dB from 40 Hz and above with the addition of room gain. That will break stuff in your house or maybe just break the house itself.

Outside of the purely utilitarian appearance of the 215PRO, there are some other caveats for home use of this subwoofer. 130 dB+ SPLs in bass ranges can be fun for a short while, but it can also be fatiguing for some people after more than just a brief demo. In addition, users will pretty much need at least a dedicated 20 amp circuit for the 215PRO to achieve its potential. There is also the issue of hearing safety, and while there isn’t any conclusive evidence that long exposure to loud bass can cause permanent hearing damage, there is some evidence to suggest that it could make ears more susceptible to hearing damage from loud noises in higher frequency bands. Common sense is required in the use of this sub if you want to retain your ability to hear. Another potential hazard is soiled home theater seating that you may have to clean up after you scare the crap out of your friends from a ‘spirited’ demo of what the Captivator 215PRO is capable of.

So the JTR Captivator 215PRO can be used in-home for good effect, but it is not a subwoofer for everyone, or very many people, in point of fact. However, those who manage to find a place for it will have a blast on those moments where they crank up the volume for bass that is as much of a physical sensation as it is an audible sensation. To those who want to rock that hard, I salute you!

Read the Complete Thread
ajemeditor posts on June 20, 2020 15:22
James- excellent write up and despite your caveats, thsoe of us of a certain age shoudl caution younger enthusiasts that this is quite likely gogin to pose hearing risk to most people. there most certainly IS such a thing as overkill re ones hearing. I encourage teh many hoemtheater enthsuisiasts out there to buy a simple hearing test app for their phones and test it 1-2 Times a year and compare to norms for their age. Its one thing to run your subs a few DBs “hot” INTs another to being into your home a device that can damage your hearing. There is a reason you only see people >65 at rock concerts with hearing aids…
lovinthehd posts on June 11, 2020 19:18

Hard to find real baltic birch sometimes, and normally in 5x5' sheets….but less messy than mdf on top of the other reasons mentioned…
panteragstk posts on June 11, 2020 12:45

shadyJ, post: 1395439, member: 20472
The cabinet is made from Baltic Birch which is much stronger and also lighter than MDF or HDF. You don't need as much of it to achieve the same stiffness. It certainly has adequate rigidity.

I did not know that about Baltic Birch. I’ll have to try building a speaker with it at some point.
Post Reply