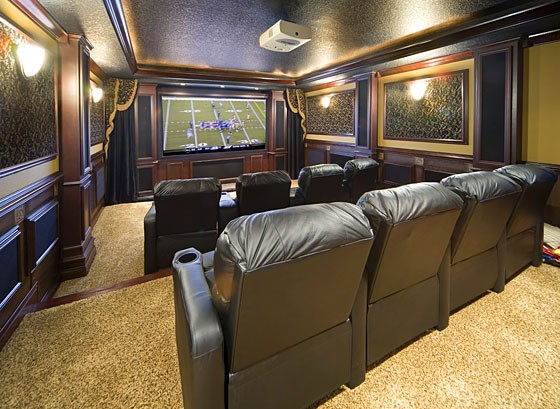 This first article focuses on the main acoustical problems of the listening room and on how they deteriorate the perceived sound. In the next articles, each of those topics (acoustical phenomena) will be developed and will be accompanied with practical advice to improve the acoustical conditions of a listening room.

Acoustics: an integral part of the reproduction system

In a medium-sized room, furnished in a usual way, but which is not acoustically treated, the critical distance is of a few meters only – generally 2 meters. The ‘critical distance’, measured from the speaker, is reached when the reverberant sound level equals the direct sound level. The direct sound is the sound that comes directly from the speakers, without any reflections. So, at that distance, 50% of the sound is the result of the reflections on the room’s boundaries. These reflections cause various problems such as: phase, frequency response irregularity, loss of definition, aggressive highs, blurred image and low frequencies that are resonant, have holes in them and lack tightness. Going beyond the critical distance means reducing the direct to reverberant ratio, thus the quality of the sound deteriorates even more.

In other words, the acoustical environment should be considered an integral part of the reproduction system.

Contrary to what one may think, acoustical improvement constitutes one of the most efficient and economical ways to enhance the performance of a sound system, since all the various listening parameters can be improved in a very significant way. For the DIY, it is possible to treat a room with affordable semi-rigid fibreglass panels. From these panels, we can build everything we need to control acoustical problems in the listening room: acoustical panels to absorb mid and high frequencies, distant absorbers to control low-mids, lower frequency absorbers that reflect high frequencies, pressure gradient traps and bass traps.

For the aesthetics, we cover the panels with sound transparent fabric, like Guilford of Maine FR-701. All the acoustical material needed to treat a room will cost between 300$ and 600$. Fees for an acoustical consultant vary.

What are the acoustical specifications for a good listening room?

Researchers, audiophiles and sound engineers have conducted many experiences to establish listening room criteria. The ITU[1], the l’EBU[2] and the BBC[3] publish some recommendations about this. Here are some of them, with some of well known acoustician’s. Those requirements are precise and are not less important than the audio system’s specifications.

What are the main acoustical problems? How do they affect the sound quality?

Reverberation
Reverberation is the product of multiple closely spaced reflections on the room’s boundaries. Reverberation extends sound and causes a mask effect on the details of the listened content. Reverberation time (RT60) is defined as the time it takes for a sound to decrease by 60 dB after its emission. In an untreated room, RT60 can vary from 0,5 to 1,5 second depending on the frequency, while the recommended values are between 0,2 and 0,4 second for good listening conditions. Much more definition and details are obtained when excessive reverberation is controlled.

One’s room RT60 can be calculated with the following tool ( Sabine’s theory):

Early reflections
Early reflections are those which reach the listener within a delay of 15 ms relative to the direct signal. The retarded sound, depending on the off-axis behavior of the loudspeaker can create phase problems by combining to the direct one or it can be beneficial to the overall listening experience. The result, as measured with a microphone produces numerous dips in the frequency response. This phenomenon is called comb filter. Standing waves
Standing waves (also called room modes) are low frequency resonances that take place between two parallel reflecting wall surfaces. They result from the interaction of wavelengths (λ) and the distance between the surfaces. So in the low register, standing waves cause: a level boost at some frequencies, an extent of the duration of sound at those same frequencies (resonance) and some profound dips at other frequencies. The phenomenon does not produce itself the same way at different locations in the place. This is why low frequency response vary from place to place in a room.

Three methods are used to solve standing waves problems. They will be discussed in the next article.

Standing waves can be calculated with the following tool:

The best way both aesthetically and efficiency to solve standing wave problems in small room acoustics is through modal manipulation using multiple subwoofers.  Once you reduce the seat-seat variance at bass frequencies, any remaining peaks can be EQ'ed out of the response to eliminate room resonances.  Low frequency bass traps can be used to supplement this solution if they are deemed to be necessary and practical.

A listening room’s acoustical conditions are therefore key factors of the final sound quality because they affect several parameters in a very significant way. The objective here is not to have a ‘dead’ room, but a neutral room. Some people falsely believe it should be necessary to have a listening room whose acoustics have some characteristics of that of a small concert hall. It would be a mistake because the recording already contains the reverberation and the acoustical ambiance of the room where the concert took place. We don’t want to change this. I occasionally recorded the sound reproduced in an untreated listening room with the aid of very high quality microphones. Believe me, the sound signature of such a room brings nothing positive and considerably degrades the perceived content.

Search for “acoustic AND room” on these websites:

Soundman, post: 552893
Good article! But I wish I could find a tool or information that covers odd shaped rooms.

No, you cannot. Odd-shaped = Not rectangular

At most, you could figure out some of the axial modes if you have at least some parallel surfaces.

Soundman, post: 552893
Good article! But I wish I could find a tool or information that covers odd shaped rooms.

Michel Leduc, post: 554377
I've repeated Toole's experiment on early reflections*.
As a teacher, I have the opportunity to do several experiences with my students during which we measure and evaluate the sound quality in an experimental listening room where we can change the acoustical treatment (removing, changing place, changing thicknesses, etc.) We got results prooving that early reflections are detrimental.

I think I can explain the differences between M. Toole’s experiments and mine. My students have all extensive experience in listening tests. They all have an acute sense of hearing that M. Toole’s participants may not have had. They are able to detect a 15 ms delay with a percussive sound, and also to note a change in the sound timbre, even with such a short sample. This is why M. Toole’s participants may not have reacted the same as our people. Though I do not deny M. Toole’s studies at all.

The question is: what are the listening skills of audiophiles?

I would be interested in reading the results of your study. Our reflection detection study used trained subjects as well. I was one of them and I am a trained musician, Tonmeister (McGill University) and a formally trained listener with audiometric normal hearing. It's entirely possible that your training regiment produces listeners more sensitive to reflections - but our results were pretty well in agreement with previous studies.

A lot of the differences could be related to differences in other variables in your study such as the program signals, method used, questions asked,etc.

We also have an experimental room (see my current blog posting "seanolive.blogspot.com) where we can change the acoustical treatment and capture, store,reproduce and measure the perceptual differences using binaural room scanning methods. This way, the different acoustical room treatments can A/B'd instantaneously – producing a very sensitive method for hearing differences, although not necessarily ecologically valid since listeners seem to adapt to room acoustics in a few seconds.

The average FL values of the trained listeners were 3–27 times higher than those measured by the other groups.

So when it comes to detect the sound of short delays and the localization etc… (like in Toole's reflection experiment) I still wonder if hearing skills could affect the test results. If we think about the Haas effect of around 35 ms, it's an average value for average listeners. But it is true that trained listeners can detect a delay as short as 15 ms (monophonic) with percussive sound (my experiments) … just to state that they have more listening skills.

This reading was interesting but I am still not convinced that Toole's conclusions in the reflection experiment can not be, at least, discussed.

But, what happens when you don't have monophonic signals but rather 2, 3 or 5 sources of info coming at you? Have you experimented with time delay and perhaps multi point source of info? Did you use percussive instruments as a test signal or some other signals? Perhaps as the signal gets more complex and simultaneously competes with other sound, that delay may be much higher?
Michel Leduc posts on April 19, 2009 08:17

avaserfi, post: 554392
I refer you to Differences in Performance and Preference of Trained vs Untrained Listeners in Speaker Tests. JAES. Vol. 51, No. 9 P. 806-825. This paper shows that the differences between trained and untrained listeners you suggest would not be a considerable factor given proper execution of the experiment.

I went trough this paper (rapidly) yesterday. It is very interesting indeed. It made me rethink. I concluded the following…
This study has been conducted to find out if trained listeners were necessary to identify what is (or should be) the best speaker, in term of preference. It shows that trained and untrained listeners come to the same preference. But I see that there sense of hearing varies. I keep in mind the following (from the conclusion);

The average FL values of the trained listeners were 3–27 times higher than those measured by the other groups.

So when it comes to detect the sound of short delays and the localization etc… (like in Toole's reflection experiment) I still wonder if hearing skills could affect the test results. If we think about the Haas effect of around 35 ms, it's an average value for average listeners. But it is true that trained listeners can detect a delay as short as 15 ms (monophonic) with percussive sound (my experiments) … just to state that they have more listening skills.

This reading was interesting but I am still not convinced that Toole's conclusions in the reflection experiment can not be, at least, discussed.