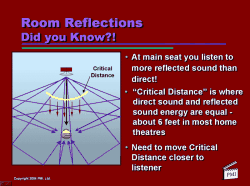 Anthony Grimani's "Room Acoustics: Acoustic Treatments" class followed his course on "High Performance Home Theater Calibration" on the afternoon of my first day at CEDIA. I'm reviewing it here, as the third installment of our CEDIA Seminars because it flows well and builds upon John Dahl's "Acoustics 101" course. A CEDIA System Designer-in-training would normally take these two classes in this sequence so that is the order in which we are presenting them.

Critical Distance
Have you ever tried to grasp concepts in learning something new? Like room acoustics for instance? If you've read Parts 1 and 2 of The CEDIA Seminars you've heard it said that the speaker system and the electronics contribute 50% of the sound of the system and that the room is responsible for the other 50%. That was all well and good for me, though still pretty nebulous, until, that is, Tony introduced the concept of Critical Distance. Critical Distance is the distance to the listening position at which the sound from the speakers and the sound from the room are equal. And, he contends, that in a typical home theater, before acoustic treatment, that distance is usually only 6 feet from the speakers!

Wow. I found that stat' amazing. This seemed to possibly explain why for so many years I'd read of reviewers listening to very large stereo speaker pairs from what seemed like ridiculously close distances. Were they trying to get within the Critical Distance criteria? Had they been aware of the room reflections and realized that they were not, in fact, truly listening to the speakers when they sat back at more typical listening distances?

The slide above is one of the best you're likely to see on the subject of room reflections for mid and high frequencies. In addition to noting all the reflections vs. direct sound depicted on Tony's slide note also that the absolute worst position to sit if you're in a typical rectangular home theater would appear to be right in the middle. The middle spot gives you perfectly symmetrical 1st, 2nd, and 3rd order reflection paths so they're theoretically at equally balanced strength as they reach your ears! Not at all desirable.

But don't move away from that center position just yet all you old-time stereo diehards. Remember a couple of important points here.