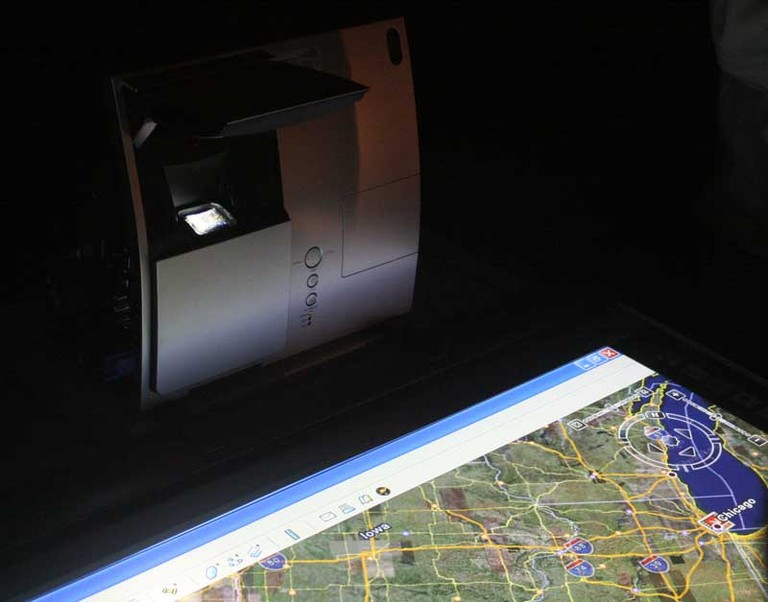 Hitachi America unveiled the CP-A100 3LCD projector, a unique product that offered a dramatically short throw distance at a remarkably steep angle. This type of projector, geared primarily towards the commercial markets, eliminates the problem of presenters obstructing the projected image by standing in front of the screen. Additionally, the CP-A100 offers networking capability, allowing multiple projectors to be controlled and monitored from a single location. It also makes for a very impressive screenwall effect when multiple units are used from an overhand along a stretch of wall.

The CP-A100 boasts an extremely short throw distance: at 1.6 feet you can project a 60 inch image. This not only prevents image obstruction, but also means there are no shadows interfering with the image and no light in the presenter's face. The versatile CP-A100 can be placed vertically as well as horizontally, as well as inverted for ceiling mount applications, making positioning of the projector more convenient.

Adding to the user's convenience is the network connectivity of the CP-A100, which allows for simultaneous monitoring and control of several projectors from a remote location. This is particularly beneficial in schools and large corporate environments, where projectors are located throughout a facility and the monitoring of each projector is a time-consuming ordeal. With the benefits of networking technology, a technician can monitor details such as lamp life for each projector from his/her computer. Additionally, the CP-A100's performance stands alone among competitive models. It offers a brightness of 2,500 ANSI lumens, XGA resolution and a 500:1 contrast ratio.

The CP-A100 addresses the issue of security with functions such as multilevel PIN locks, a security bar and a Kensington slot. Moreover, the CP-A100 appears easy to use, featuring advanced connectivity and proprietary Hitachi functions including My Buttons, Input Source Naming and My Text. The CP-A100's E-Shot feature allows users to transfer up to four still images from a computer to the projector.

Easy maintenance is another attractive function of the CP-A100, as its lamp door is on top of the model, and the filter is located on the back, allowing for easy access. The CP-A100 offers additional versatility with its Whiteboard, Blackboard or Day Time Modes.

This product caught our eye and is a real no-brainer for those looking for a very impressive business-level solution that avoids the typical issues of glaring presentation products and shadow casting. I wish we could announce pricing and availability, but Hitachi was mum for now.

For more information about Hitachi's activities at the 2008 International CES, please visit http://av.hitachi.com/