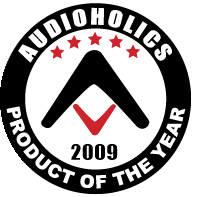 2009 Product of the Year Awards

2009 was much like 2008 for consumer A/V in regards to the lack of advancement in technology as much as bringing existing technologies into more affordable platforms for greater mass appeal.  It seems like every week flat panel display prices are dropping and the latest technologies of these displays trickle down to the more affordable models. LED backlit technology is finally starting to creep its way into the mainstream and traditional front projector bulbs are lasting longer and longer. A/V receivers are getting more packed with critical features such as the latest in HD Audio decoding (Dolby TrueHD, DTS HD, etc) as well as network streaming and more HDMI inputs.  Care must be taken however to not trade amplifier performance for features as we have found in some models.  Some new and exciting loudspeaker systems have hit the online marketplace that would normally be much more expensive through traditional brick and mortar places.  This not only increases your buying power, but also gives you aesthetically pleasing options to appease the spouse  that happen to also sound great to fill your man-cave with the sound you always dreamed of having.

With that in mind, we selected gear in each category that really stood out via our personal experiences, reviews or demo's as well as the market trends set based on performance, features, and value.

For the past few years, Onkyo has been about giving consumers the most feature packed products money could buy.  At the same time, they did so without sacrificing amplifier quality by still giving you a fully discrete amplifier section and not watered down chip amps like some of their competitors have done in this price class.  The TX-SR707 comes armed to the teeth with all of the latest HD surround format decoding (Dolby TrueHD, DTS HD, etc) including Audyssey's new DSX for those ambitious enough to add more speakers and amplification in their theater room for an expanded soundfield.  The TX-SR707 also features the new THX Select2 certification along with Audyssey MultEQ room correction system along with dual subwoofer outputs.

Oppo has given you the proverbial cake to eat with the does everything, affordable BDP-83 Universal Blu-ray dream machine.  For those who want the very latest in Blu-ray while also supporting their DVD-A and SACD collection, look no further than this player.  We found no faults when using the HDMI outputs as we observed pristine video for Blu-ray and standard DVD playback as well as top notch audio performance.  This player has lightening fast navigation for quick play operation and even comes with the very useful Spears & Munsil Blu-ray set-up disc to help optimize your picture quality.   The analog outputs were also quite good for CD playback but bass management for multi channel was a bit limited.  At this price however, one could easily pair this player with the Onkyo TX-SR707 and have a fully digital solution for under $1,200 that was simply not possible only a year ago.

What happens when the designers from RBH Sound decide to apply their engineering know how to produce an attractive and affordable tower speaker system to sell online?  You get the award winning e5Ti tower system whose looks and sound are a homerun among our reviewers and site readers.  These speakers sport dual 6 1/2" woofers, a 5 1/4" phase plug midrange driver and a 1 inch silk dome tweeter.  The glossy finish on these cabinets make them look like a million bucks and they look uber sexy with the grilles off.  About the only complaint one could have of these speakers at this price is their physical height.  But in this case, good things do come in small packages especially when they are easy on the wallet.  With such elegantly rounded slim cabinets, and availability in black or cherry finish, they are easy to blend into any room decor. What is this, an exotic speaker cable vendor winning  Product of the Year Award on Audioholics?  You betcha.  We absolutely loved the Kimber 8PR speaker cables.  They measured well and their standard banana plug connector was a perfect fit for all the equipment we attached to them.  This may sound strange, but you would be surprised at how many banana terminations we've tested that simply don't function this well by either sliding off with a slight pull, or not completely entering the speaker terminal.  Of course their WBT compression banana plug is among the best in the industry but it doesn't come cheap.  There is no doubt you can self terminate your own cables for cheaper but for those not willing to do this and prefer a prepacked solution that is snake oil free and high on performance, we highly recommend the Kimber 8PR for all of your high end speaker cabling needs.

I find it maddeningly easy to be critical of new products. However, when Samsung sent us their 1.2"-thin LED backlit UN40B7000 HDTV, we set it up and quickly found ourselves struck speechless. There are some flaws - an unresponsive remote control, off-axis black levels, and a few setup quirks, but there is not much to dislike about this 40" flat screen television. In fact, it's got a lot of benchmark features we'd like to see in many other sets on the market. I wouldn't necessarily recommend this TV over others if you're not mounting it on your wall, but if you're looking for thin and sexy - this is it. For a combination of quality and style, it's going to be very hard to beat this TV right now and the price you pay goes a long way into the myriad of features this television offers.

Epson Home Cinema 8100 LCD Projector (Review Pending)
Epson's Home Cinema 8100 LCD projector is basically the excellent Home Cinema 6100 with some minor improvements. Epson claims double the contrast ratio, but either way we expect an excellent picture given the relatively low cost of entry. The projector delivers a 1080p picture at 1800 lumens and the lamp will last up to 4000 hours in the low lamp mode. It has horizontal and vertical lens shift and an ample Zoom lens to ensure easy placement. Dual HDMI inputs ensure that you can connect anything you need to it. The retail price of the Home Cinema 8100 is debuting $400 lower than the 6100 was just a year ago. This is simply a great, well-rounded projector.

Samsung HT-BD8200 Blu-ray Sound Bar Home Theater System
Samsung's HT-BD8200 has just about everything you can imagine. Not only is this a low-profile soundbar, suitable for any thin flat screen display, it also has an integrated Blu-ray Disc player.... and a wireless subwoofer... and Netflix streaming... and Pandora... and YouTube... oh, and Blockbuster streaming videos. It also works wirelessly over 802.11 b/g/n, thanks to an included wireless USB dongle, making it an all-in-one entertainment hub of ridiculous proportions. For $799 this is a value product that should be in any living room or bedroom where style is important and a full surround sound system isn't desired (either due to aesthetic reasons or because of the difficulty of running wires or impacting the structure of the home.) We've heard some competing products trump this in terms of realistic surround sound reproduction, but for a true 2.1 system, the HT-BD8200 is going to be very tough to beat - there is simply too much packed into this product to ignore.

Read the Complete Thread
AdrianMills posts on February 16, 2010 13:25
I don't get back here often these days and I just saw this thread… took a look at the listings and… there's a cable entry.

Seriously, when is any simple passive cable worth a “best of” unless it does a hell of a lot more than plug into something and just, uh, work? I mean, if it were a 200m active HDMI cable that actually required some real engineering I could understand but guys, this is a speaker cable, a bit of copper with a jacket and some connectors which is no better than the cheap pro-audio stuff I just bought for my new HT room.
Alex2507 posts on February 15, 2010 22:04

Now the price has gone up to over $600 everywhere.

That's okay because I want this other rec'r way more that I can afford even less than I can afford this one.
dick123 posts on December 28, 2009 01:17
Hello
2009 was much like 2008 for consumer A/V in regards to the lack of advancement in technology as much as bringing existing technologies into more affordable platforms for greater mass appeal. It seems like every week flat panel display prices are dropping and the latest technologies of these displays trickle down to the more affordable models. LED backlit technology is finally starting to creep its way into the mainstream and traditional front projector bulbs are lasting longer and longer. A/V receivers are getting more packed with critical features such as the latest in HD Audio decoding (Dolby TrueHD, DTS HD, etc) as well as network streaming and more HDMI inputs.
TheFactor posts on December 27, 2009 21:35

TheFactor, post: 666173
Thanks Adam in that case maybe i'll just keep my Elite 94 a little longer then

No problem! Heck, if I knew what was on the line, I would have lied.

“1.3a is a HUGE improvement. You should sell…nay, give away…that Elite POS. Oh, btw, I'll take it.”
Post Reply