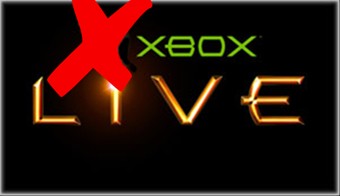 A new policy at Microsoft will force cheaters on Xbox Live to wear the scarlet letter of shame. The largest online console gaming service is laying down the gauntlet to deter gamers from cheating, one of which is an explicit label on your Live gamer-card. As Mr. Murrel said – “Don’t do the crime if you can’t wear the sign.”

As surely as there is a game, there will be cheaters. Some people aren’t logging on to online gaming services like Xbox Live to play the game. They log on with the intention of playing a game of a different sort - gaming the system. It’s the sad, cheap thrill of many a dweeb. The practice taints the scorecard system on Xbox Live and damages the online experience for all gamers.

Microsoft has instituted a series of punishments for anyone caught gaining achievements in any way that avoids actual game play or the use of external programs or tools.

The automated Xbox Live police will do the following:

You can see one cheater that has been caught by the new system that was imposed already. His gamer-tag is StripClubDj, sounds like a classy guy.

For more details from Microsoft on the measures being taken check out the official announcement from Xbox Live on Xbox.com.

Read the Complete Thread
dakine posts on April 10, 2008 14:15
Public shaming is the only way to go.
BG3 posts on March 28, 2008 09:49
I wish they would do this for the PS3! The cheating absolutely ruins the fun in any game. That's why I moved from playing FPS on a PC, which I actually prefer, to the PS consoles. You expect cheating on a PC. I don't expect it on a console.
Jack Hammer posts on March 27, 2008 19:11
I'm all for it. Years ago I stopped playing Socom online on on my PS2 due to all the cheaters. They would get codes that made them invincible or even invisible. It took all the fun out of the game when some A-hole would cheat so badly that there was no point in even playing. I hope Xbox keeps their ip address or box # and tags it permanently so they can't just use a different user name.

At Least They Aren't Banning For Cheating. If That Was The Case, I'd Be Completely Against It Since Everyone Deserves A Second Chance.. But If All Your Going To Do Is Change The Profile Pic And Lower The Gamer Score, That Sounds Fair To Me.
GlocksRock posts on March 26, 2008 16:40
sounds like a great idea to me, too bad they didn't implement this soooner.
Post Reply