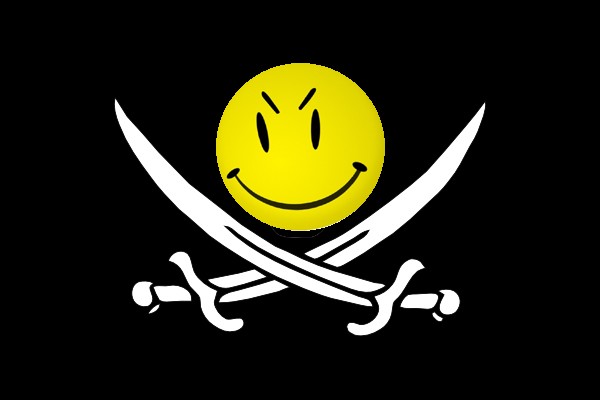 Arrr... Ye can be right clicking and selecting "Save as"...

When Wal-Mart started offering DRM free music in February 2008, it was heralded as a triumph over DRM (digital rights management). Now, consumers took a hit over the weekend from Wal-Mart who is shutting down their DRM music servers. Over the weekend, Wal-Mart issued this email:

We hope you are enjoying the increased music quality/bitrate and the improved usability of Walmart’s MP3 music downloads. We began offering MP3s in August 2007 and have offered only DRM (digital rights management) -free MP3s since February 2008. As the final stage of our transition to a full DRM-free MP3 download store, Walmart will be shutting down our digital rights management system that supports protected songs and albums purchased from our site.

If you have purchased protected WMA music files from our site prior to Feb 2008, we strongly recommend that you back up your songs by burning them to a recordable audio CD. By backing up your songs, you will be able to access them from any personal computer. This change does not impact songs or albums purchased after Feb 2008, as those are DRM-free.

Beginning October 9, we will no longer be able to assist with digital rights management issues for protected WMA files purchased from Walmart.com. If you do not back up your files before this date, you will no longer be able to transfer your songs to other computers or access your songs after changing or reinstalling your operating system or in the event of a system crash. Your music and video collections will still play on the originally authorized computer.

Thank you for using Walmart.com for music downloads. We are working hard to make our store better than ever and easier to use.

You'll notice that DRM'ed music will still work on the computers for which it was purchased but will not work (as designed) on other computers. If you have a major problem and have to reinstall your operating system, your music will also be lost as there will be no way of reacquiring it from Wal-Mart. Their solution is to encourage you to "steal" it by ripping it to a CD. While we don't know all the reasons behind Wal-Mart's decision a few come to mind. Most likely, the music libraries between the DRM and non-DRM music is not the same and therefore one will have to be phased out. The obvious solution of offering owners of DRM'ed music a non-DRM download for free seems to be off the table for some reason. We suspect again the disparity between the libraries and the logistics of knowing who owns what. Of course, they could just have an overstock of blank CDs to get rid of.

What is surprising isn't so much that DRM has made lives of consumers unnecessarily complicated (it has happened before and it will again) but that people are surprised at it. This is the same thing that goes on each time their is a major update to computer software or a company goes out of business - it is a crap shoot if your current products will be viable or supported. As long as companies try to keep control over content, consumers will have to make sure that they stay in business or don't change their model.

Discuss This Article
Biggiesized posts on October 02, 2008 23:30
Burning DRM'd songs to a CD so you can play them back in the future, is NOT the same as the Sony/BMG witness who said that ripping songs FROM a CD is “stealing.”

Tom Andry, post: 462866
jinjuku is right - I agree that I wouldn't define it as stealing but the RIAA would. Technically, they could (and might) go after Wal-Mart for their suggestion. They've sued grandmothers, I don't know what would stop them other than fear of better lawyers on Wal-Mart's side. I figured most of our readers would be familiar with the RIAA stance on copying content. I should have explained that better.

And the RIAA isn't stealing from the artists!!!????

That is one group I would like to diabnded forever and for the betterment of the music industry as a whole. What a crock of sh?t!!
jinjuku posts on September 30, 2008 00:07

It was NOT an official statement by the RIAA, nor is it an official position of any recording company.

It's patently obvious what RIAA/MPAA think of people trans-coding, for very valid reasons, content they have purchased.

What I don't like is the RIAA/MPAA push to criminalize such behavior. That way they can get the government to kick down your door for them.
Post Reply
See also:
About the author: