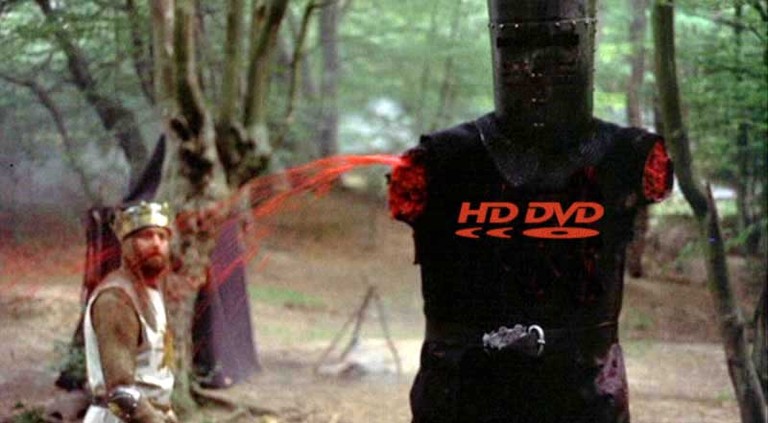 It's merely a flesh wound!

Toshiba today announced that it is stepping up its successful marketing campaign for HD DVD as it experienced record-breaking unit sales in the fourth quarter of 2007. Major initiatives, include joint advertising campaigns with studios and drastic price cuts which will begin in mid- January. HD DVD will also tout their focus on quality DVD upconversion and continued customer support. It seems Toshiba isn't ready to give up the ghost just yet.

The following is taken from an official release issued from Toshiba:

As Toshiba achieved the #1 sales volume in the next generation DVD category with an approximately 50 percent market share in 2007, HD DVD is proven to be the format of choice for consumers. Coupled with an 80 percent plus market share of all next generation DVD equipped notebooks for the 4th quarter 2007, the HD DVD format has already paved the way to a high definition digital AV solution by eliminating the boundaries between the consumer's living room and on the go.

HD DVD not only creates the ultimate high definition entertainment experience, leveraging all of the promise of the format such as superior audio/video performance, Web-enabled network capabilities and advanced interactive features - it also has a high-level of compatibility with DVD. With DVD upconversion via the HDMI output, HD DVD players instantly make a movie lover's existing DVD library look better than ever.

"HD DVD is the best way to watch movies in high definition," said Jodi Sally, Vice President of Marketing, Toshiba's Digital A/V Group. "Our HD DVD players not only play back approximately 800 HD DVD titles available worldwide and deliver an entirely new level of entertainment but also enhance the picture quality to near high definition on legacy DVD titles by all studios. In short, we added high def to DVD which already is the de facto standard format created and approved by the DVD Forum that consists of more than two hundred companies."

"While price is one of the consideration elements for the early adopter, it is a deal-breaker for the mainstream consumer," said Yoshi Uchiyama, Group Vice President Digital A/V Group. "Consumer sales this holiday season have proven that the consumer awareness of the HD DVD format has been elevated and pricing is the most critical determinant in consumers' purchase decision of the next generation HD DVD technology. The value HD DVD provides to the consumer simply cannot be ignored."

Toshiba plans to execute an extended advertising campaign that will further enhance consumer awareness of the benefits of HD DVD and drive sales to retail among potential consumers. Advertising strategies will include television, print and online media channels. Toshiba will also work with its dealers and studio partners on joint marketing and promotional initiatives to promote HD DVD. Current promotions include "The Perfect HD Offer" - a mail-in offer allowing consumers to select five HD DVD titles for free from a selection of 15 with the purchase of any Toshiba HD DVD player.

With advanced interactivity and Web-enabled network capabilities built into every HD DVD player through a dedicated Ethernet port as mandated by the specifications approved by the DVD Forum, Toshiba delivers on the promise of a consistent entertainment experience through firmware updates as studios launch new applications. HD DVD allows studios to flex their creative muscle in ways never before seen. The latest of these new experiences is online streaming. Now, when consumers connect their HD DVD player to the Internet, they can stream new content or trailers, as available, directly from a movie studio's server.

Universal Home Video, Paramount Pictures and DreamWorks Animation SKG have reported that an average of 30 percent of HD DVD owners have accessed Web- enabled network features and continue to do so regularly.

In order to ensure that its customers will receive complete satisfaction from their new players, Toshiba introduced the "HD DVD Concierge" earlier this month. Consumers can now call 1-888-MY HDDVD (1-888-694-3383) for answers to general questions about HD DVD, for operational assistance or for assistance with various promotions.

With all of this continued pushing, we're wondering how long Toshiba and HD DVD can hold out. Should another studio bail out, then this part of the format war is most certainly over and the next part will begin: the battle between Blu-ray and downloadable content. This can be more accurately translated from a consumer perspective into: Why should I give up my DVDs and why should I do it before HD downloads are at my fingertips?

They are losing because of CE and studio support.

As is always the case, people want choice, and they have their favorite manufacturers that they will buy into regardless of price. People forget that the CE company that is most despised (Sony) is the same company that is most trusted. People forget that companies like Panasonic, Samsung, and Pioneer draw loyalties and $$$ based upon their brand name. Toshiba, while well respected for years, is no Sony or Samsung. They are huge, but never one of the forefront choices for consumers when considering a CE purchase.

So, when it comes down to an accurate assesment of the format war - when looking at CE companies - it is Toshiba vs. everyone else. Those are the odds you bet against with HD DVD… EVERY other major CE manufacturer.

Unlike SACD and DVD-A which was actually split among manufacturers… and hit a totally different market segment… Blu-ray has nearly unanimous support with CEs with them developing product from the ground up. It is dismissed as Sony vs. Toshiba, but Sony stand alone players only represent about 60% of the market. Yes, the majority, but not the 100% that Toshiba is. 40% of Blu-ray stand alone player sales are generated by companies that are NOT Sony.

I think if Toshiba had gotten HD DVD into the X360 and managed to get a few more manufacturers on board then things would be far, FAR better for their format.

The studio support has always had a slight bend towards Blu-ray as well, with only Universal originally being HD DVD exclusive. It had been like 85% to 50% for Blu-ray vs. HD DVD in studio support. Come May it is, as of now, going to be about 70% to 30% in favor of Blu-ray.

Pricing is a big boost, but only if it sells movies. If people buy HD DVD players then just rent some movies, or use it as an upconverter, then there will be no reason for Universal or Paramount to not go neutral… at the very least.

Gatsby191, post: 359165
Since alot of people are claiming that Blu-Ray has won(Pros and Novices Alike), I am wondering if anyone knows where I might find some “Cheaper” priced HD DVDS for sale. (Preferrably online) I have both players, and they were both gifts for this past Christmas.(Panasonic's DMP-BD30 and Toshiba's HD-A35). I was hoping to find some cheaper prices on new releases that are on HD right now-because of the recent format war update. But, the HD DVD prices don't seem to be budging yet. Anyone have any advice, or info on where I might find some price breaks? Just trying to save some $ if I can.
Thanks everyone! Joe B.

I will only say the “battle” is over when Toshiba announces their first Bluray player. Try deepdiscount.com
Gatsby191 posts on January 16, 2008 23:34
Any cheap HD DVDS Yet?

Since alot of people are claiming that Blu-Ray has won(Pros and Novices Alike), I am wondering if anyone knows where I might find some “Cheaper” priced HD DVDS for sale. (Preferrably online) I have both players, and they were both gifts for this past Christmas.(Panasonic's DMP-BD30 and Toshiba's HD-A35). I was hoping to find some cheaper prices on new releases that are on HD right now-because of the recent format war update. But, the HD DVD prices don't seem to be budging yet. Anyone have any advice, or info on where I might find some price breaks? Just trying to save some $ if I can.
Thanks everyone! Joe B.
Post Reply