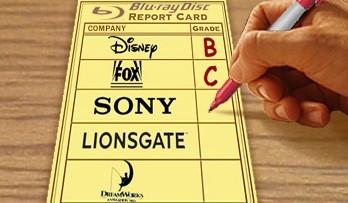 Congrats Sony Pictures Home Entertainment, for getting in A in Blu-ray! An article at the Sound and Vision website gives grades to the major studios making Blu-ray discs. In the article Ken Brown rates the studios Blu-ray releases for a combination of audio/video quality, number of releases and overall consistency. In his grading system, Sony Pictures gets an A. But this isn’t an easy credit grade, Mr. Brown proves to be a tough Prof. that isn’t afraid to fail the studio that doesn’t measure up.

The big boys everyone will recognize are all there, Disney / Buena Visa, Fox, Paramount / Dreamworks, Sony, Universal and Warner. Sony tops the pack with an A- rating. Ken Brown calls Sony the most consistent and dependable studio of 2008. Sony Pictures Home Entertainment has presented clean video and strong Dolby TrueHD soundtracks. Sony Pictures has also delighted film fans with a diverse mix of Blu-ray offerings. Not satisfied with releasing only recent hits, Sony has also added rare classics to library of high-def offerings.

What other studio would consider releasing foreign black-and-white anime like Persepolis to Blu-ray? And that’s not the only indie film to get the Blu-treatment from Sony Pictures.

High marks are also given to Disney for feature-packed releases like the Pirates series and of course Ratatouille. Consistently high picture quality and TrueHD audio nets Disney a B. The author felt a few key releases failed to live up to the mark. A shabby high-def transfer of Gangs of New York is one example preventing Disney from earning top scores.

Paramount was an interesting studio to watch this year. The former HD DVD exclusive that held on to the bitter end has proved a great asset to Blu-ray. A B+ rating was earned with flawless transfers of soon-to-be Blu-ray classics including Transformers and Iron Man.

It’s tough to argue with Fox getting a C grade. The studio’s video quality on Blu-ray has been inconsistent at best. Lionsgate fared little better and you’ll just have to check the article to see which studio received the failing grade.