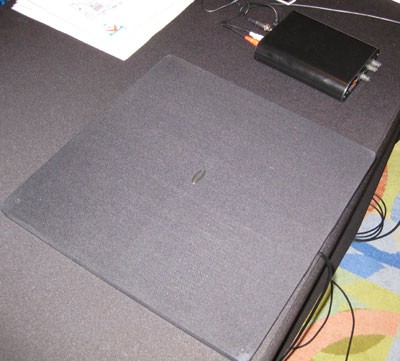 With Audioholic’s State of the Union show in full effect it’s easy to get distracted amid the boomin’ demo rooms. Behind each darkened door are high resolution scenes of pulse pounding subwoofer-action. Bond seemed forever locked in a men’s-room battle with a turncoat spy while Iron Man could simply not get enough of that aerial battle against two US Jet Fighters. But if you could pull yourself away long enough you might have caught one of the most fascinating uses for modern acoustic technology. It’s the AudioSpotlight by Holosonics.

Portable technologies may have made us a more noise sensitive society, especially in the city. Are white earbuds being worn by legions of iPod users to hear music or just drown out the noise? For the noise weary among us, Holosonics has been contributing to the silence.

Projecting sound beams is not exactly new. Holosonics has been perfecting its Audio Spotlight system since 2000. Similar technology is used in digital surround projectors like Yamaha’s YSP line with great results. Holosonics has created a panel that sends a tight beam of sound with almost no amplitude escaping outside the beam.

The effect is remarkable! A wafer thin panel only a half-inch thick literally beams a tight sound-field wherever you point the panel. Inside its range you hear the device’s full frequency, but step mere inches outside the field and you hear almost nothing. One more step back and you wouldn’t even know it was a speaker cranked at high volumes.

Dave (MajorLoser) and I had a chance to play with the device at the reception desk. Using an iPod as a source, overly-cheery jazz was piped through its processor/amp using standard line level RCA inputs. No offence to whoever’s iPod it was - but that track we were playing with sounded like a mouthful of saccharine. It was the perfect score for some devious pranks.

It was fun to point the sound-panel down the hall and audibly locate surfaces off which it could reflect sound. Occasionally we’d stream a sound-field onto a circle of attendees adding mysterious musical merriment to their conversation. It has a surprising range. You could conceivably send very audible SPL levels to people standing a hundred feet away. The AS-16 model is rated to provide maximum performance (a 1kHz test tone up to 80db) up to six feet.

The Audio Spotlight is hardly a hi-fi device. The sound quality isn’t designed for sitting in your living-room for critical listening. But there are built-in TV speakers that sound worse. For certain applications, like anywhere you need some background sound without headphones, it’s perfect.

Holosonic has installed its audio spotlights throughout the world. It works perfectly at trade shows where booths are crammed together competing audibly with each other. A controlled sound-field means separate messages can be heard only feet apart. It’s also setup at the New York Public Library where news is displays from around the world. Users can listen to the video display without disturbing nearby readers. Gaming kiosks at retail stores are the perfect application allowing a line of gamers to be immersed in separate audio/video experiences.

The company’s own marketing phrase says it best: Beam sound to your listeners and preserve the quiet.

I have more to post on the show but I also have a plane to catch. I'll be home writing about some things I'm pretty excited about from the show. You've seen EMP and Emotiva write ups, it was really, really an incredible experience to hear from the guy that designed what you're listening to in such as casual atmosphere - minus the big show sales pitches and unnecessary glitz.
engtaz posts on October 25, 2008 15:51
It was a pretty cool device. Very useful for cubicals.

engtaz
Adam posts on October 25, 2008 13:18
Excellent! Thanks for the article and pictures. I would love to have seen/heard one of those. I've been waiting for years for these to hit the mainstream. I first saw their stuff on the web back in (I'm guessing here) 2001. My reasons were not as jovial as the convention hall prank, though. My neighbor runs his hot tub 12 hours a day (2 hours on, 2 hours off, day and night), and it used to wake me up and keep me awake. So, instead of planning on how to erase his entire genetic line from our world, I turned to a Google search for “audio spotlight”. BAM, there it was. I figured that I could team it up with a motion tracking, motorized panel and beam screaming noises (or worse) directly to his head as he walked around his yard.


I had a great time playing with these yesterday afternoon. I place it on a stand pointing down the convention floor to the main entrance that went down about 100 feet before it turned. It was funny watching people turn around trying to figure out where the music was coming from. They were using an iPod as the source. It had various sound effect loaded. I turned the birds chirping effect on and people were looking around to find the birds.
Post Reply