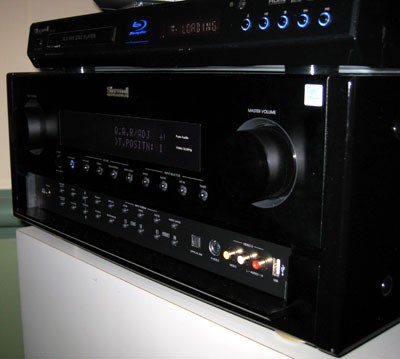 One of the most exciting new technologies exhibited at this year's Disney State of the CE Union event was a live demonstration of the upcoming Sherwood Newcastle R-972 receiver featuring the new integrated Trinnov Optimizer room EQ system. But could too much emphasis on a new technology be a gamble for Sherwood?

We've been waiting since wayyy back at CES 2007 for this unit to materialize. And materialize it finally has! At its $1799 MSRP the Sherwood Newcastle R-972 is poised to be a flagship receiver when it's released by the end of this year. For the price you get a competent A/V receiver fully ready for the rigors of the HDMI 1.3 world. It has four HDMI inputs and seven analog video inputs that it can convert to HDMI, scaling video to 1080p thanks to a Silicon Optix Reon VX processor.

As a whole-house A/V solution it can support up to 2 zones and a third zone with audio only. Sherwood Newcastle’s R-972 supports deep color and all the new lossless audio codecs found on your Blu-ray discs including DTS Master Audio HD and Dolby True HD.

The real sales pitch for the Sherwood Newcastle R-972 is its Trinnov Optimizer. Sherwood is banking that this gadget will set it apart in an A/V receiver market that’s as competitive as a bloodthirsty school of hammerhead sharks.

For the uninitiated, the Trinnov Optimizer is a "three dimensional" room EQ system that has previously only existed as a professional-grade $13,000 system. As a high-end room equalization system it flattens frequency response and adjusts level, phase and time for total sound-field control.

As we learned during the recent Audioholics-sponsored Home Theater 101 class provided by John Dahl from THX, room acoustics is more about making it suck-less by working with the hand you're dealt rather than seeking perfection. We all compensate with less than ideal speaker placement in our home theater. A decent room EQ system is a shortcut to dealing with a room's shortcomings.

The Trinnov system repositions acoustic locations of every channel in the room. Using the most powerful room EQ processing power available it can create a three-dimensional acoustic space to envelope the listener anywhere in the room. The Trinnov solution claims to be able to apply the precise multi-channel mix required to recreate the exact acoustic waveforms the mixing engineer created on the original dubbing stage.

That’s fine for a $13,000 piece of equipment used by professional studios like 20th Century Fox. But how will this translate when it's scaled down to fit Sherwood Newcastle’s consumer-grade receiver?

many of today’s A/V receivers. It’s a popular multi-step configuration system that lets you place an acoustic probe in and around your prime listening area while your receiver builds a sound-field around it. Needless to say - results may vary.

The first thing that struck me was that the Trinnov Probe is a multi-pronged apparatus apparently used to glean a sampling of acoustic information dynamically in three-dimensions rather than via one single microphone. We're not sure exactly why several microphones closely spaced together makes this system more effective than a single calibrated microphone placed in several distinct locations, but it's certainly different.

The room EQ effect was suitably impressive. As we switched from a standard setting to fully processed, the Trinnov processing suddenly made dialogue more articulate and bumped up the fine acoustic effects that are easy to miss in any soundtrack. The results of the room EQ process were remarkable. The feature will be perfect for anyone who doesn’t care for long acoustic tweak sessions while adjusting timing and distance of speakers manually. That you can setup three separate room positions is also a nice touch.

But let’s remember that this is still a room EQ process. When it comes down to it, we should trust our ears first and feel free to tweak surround and speaker settings no matter what room EQ process you’ve used. For many advanced Home Theater connoisseurs Trinnov Optimization is likely not much more than an audio-gimmick. But for HT-newbies it’s a great way to jump into a competent surround setup.

Audioholics’ State of the Union 2008 demonstrated some of the best acoustic setups I’ve ever heard. The rooms were huge and mostly isolated enough to prevent too much audio spillage from the next room. Unfortunately Sherwood Newcastle didn’t bring speakers that were up for the job of generating much excitement about sound quality. The anemic Hsu Research HB-1 speakers might have sounded better in a much smaller room. But inside the extravagant demo-rooms of the Disney Dolphin hotel they sounded as frail as a poor old grandma asking for her prescriptions at the drug store.

To be fair I’ve never bought into amplifier’s coloration of audio quality. The Sherwood Newcastle R-972 has seven amplifiers built into it rated at a beefy 100 Watts RMS apiece, typical for A/V receivers in this price category. Absolutely nothing heard in the demo warranted red-flags about the amplifier’s power. When it came to pre-amp/processing duties the R-972 did a fine job of creating a lifelike soundstage out of clips from Pearl Harbor, even if the bombs lacked the boom of the real thing. If anything, the limiting factor was simply the speaker selection.

In closing, it was truly an honor to get to be one of the few in North America to put the R-972 through its paces at the 2008 Audioholics Expo. The Sherwood name is a familiar brand for which I’ve always had a soft-spot. It’s nice to see the company is still alive and well with its own high-end line dubbed – Newcastle. Sherwood Newcastle has a competitor on its hands in the R-972 and anyone building a home theater should take note. But if you’re looking at setting up a Home Theater with unusual speaker placement or other room hurdles its unique Trinnov Optimizer features might just be a deciding factor.

Read the Complete Thread
scott911 posts on July 24, 2013 11:15
I think the r-977 will be branded just sherwood, not sherwood newcastle. Newcastle will return in future. The r-977 won't have Trinnov, hopefully a future newcastle branded model will.

On my 972( which has the latest firmware, 1.34 ), I have found that you cannot assume that all 3 Trinnov Positions are the same. They seem to have different initial states, because from precisely same mic position and speaker setup, different Trinnov Positions calibrate differently. So if you get an unsatisfactory calibration with Position 1, try using Position 2 or 3, and you may get lucky. I did. Before reading a post on another 972 user thread( at HomeTheaterShack.com ), I had never considered the possibility that, given exactly the same experimental setup( mic/speaker/room ), different Trinnov Positions would calibrate differently, but on that thread, a user who calls himself Matteo, having failed to get any subwoofer output with Position 2, simply recalibrated the same setup( his sub is built into the room, so he can't move it ) at Position 1 and the bass response mysteriously re-appeared.

With my 972, Position 1 gets the speaker mapping right, but gets the levels wrong( especially the sub, which is too far down ), Position 2 gets the mapping( geometry ) wrong, but gets the levels right, and Position 3 gets both the mapping geometry and the levels right. If the sub is underfed to the extent mine was at Position 1, none of the Room EQ options have much of an effect, as they are swamped by the over-bright level settings. With more accurate level settings, the Trinnov Room EQ is usable and audible, though you may still opt to turn it off. To my ears, Trinnov Room EQ( with 4 built-in target curves ) is similar in effect to Audyssey Room EQ.

The moral for 972 users: if you can't get it right with one Trinnov Position, try another one. The different Trinnov Positions are supposed to be used for different seating positions, but in my unit only one Position( 3 ) works, so can only get a correct calibration for one seating position.
rolyasm posts on March 17, 2010 19:45
XJR15.
I too have been using the new Sherwood for about 2 months. There were a few quirks I had to work out of it, but most were fixed by upgrading the firmware. I also used the +6 dB hex file that boosted the bass a lot.
I had to run my Trinnov a few times a few times. It did not want to seem to pick up my bipole signal as well as when I switched to dipole. After using the system for about 3 weeks, something happened with Trinnov. One of the speakers sounded like it was blown, but after trouble shooting, I realized it was the output signal. I rebooted the system, ran Trinnov again, and it has worked great since. I have a Denon 807 that I use for another room, and I hooked it up in between the first and second setup of the Sherwood. I like the Sherwood more. The “natural” EQ gives a boost to the bass and cuts the high end and I think it is my favorite. The 807 is great. I don't have any complaints about it, but if I had to choose, I would take the Sherwood.
xjr15 posts on March 16, 2010 23:21
Informal comparison between Audyssey amd Trinnov

analog2digital, post: 514354
I still want to see/hear about a shootout between Trinnov and Audyssey.

I have been using a Sherwood Newcastle R-972 with Trinnov Optimization for several weeks now. This receiver replaced a Denon 2808CI with Audyssey MultEQ XT, so I have some experience with both Audyssey and Trinnov in the same room. I very much liked the Denon with Audyssey Room EQ enabled, and it was enabled all of the time. The tonal balance of the Audyssey in my room was really excellent. I have been an audio hobbyist for 30 years, and I have listened to many different systems and components, but I have not done any rigorous testing or double-blind comparisons. But to me, the Audyssey was a real advance and made a big difference( for the better ) in my home theater/audio rig. I would also say that, so far, I prefer the Sherwood/Trinnov to the Denon/Audyssey. In the R-972, the Trinnov does both Room EQ and Spatial Remapping, and they can be enabled/disabled independently( The Audyssey only does Room EQ ). I have not been able to get the Trinnov Room EQ to work satisfactorily( the bass is weak and the treble emphasized too much for my taste ) so I have disabled it and tweaked the level control of my subwoofer to get an acceptable balance( I am using mini-monitor Paradigm Ref Sig S1 v2 and C1 v2 as fronts/surrounds/center and a Paradigm DSP-3400 sub ). In my view so far, even without Room EQ, The Trinnov Remapping does work and puts the Trinnov ahead of the Audyssey, mainly because of the better 360 degree imaging. With the Trinnov, the imaging is much more enveloping and specific, without vagueness or smearing of the images, compared with the Denon/Audyssey. This can be revelatory for certain recordings. I tried the Beatles Past Masters disc 2 stereo remaster through the Trinnov 3D remapping a couple of days ago and it was just great, especially Lennon's Paperback Writer with its fairly intricate vocal harmonies.