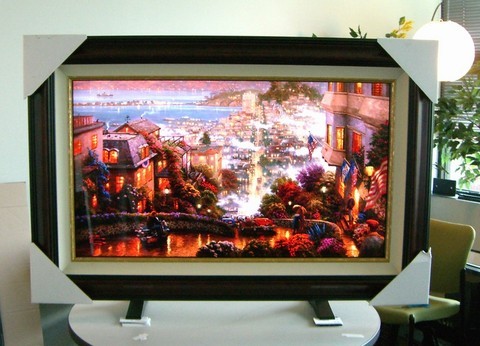 Even traditional artists are getting into the HDTV craze. Samsung announced today that it has collaborated with The Thomas Kinkade Company to develop an LCD TV that would be able to shift between artwork and TV programming at a moment’s notice.

The eventual concept would enable the distribution of additional Thomas Kinkade artwork, and possibly accompanying audio, via wired or wireless 802.11b/g/n Internet. The audio track could included an overview of an art style or period or a biopic about the artist or the work itself. There is also talk of eventually featuring a customizable integrated touch screen to allow the purchaser to modify overall image lighting or subtly enhance specific colors within the Thomas Kinkade Company’s guidelines to take maximum advantage of the lighting in the home or office where it has been installed. The Thomas Kinkade Company’s distribution network would format images so that they displayed correctly on a 16:9 screen.

Honestly, I think pressing a Blu-ray or DVD disc of the artwork would be MUCH more practical for most... but hey, we're just throwing that out.

Initially the display will only be available through Thomas Kinkade Signature Galleries, due to appear in the gallery shop later this year.  More broad distribution will occur in the second half of 2009.  No pricing has been revealed, either for the Digital Masterworks Art-TV itself or ongoing costs for imagery.

The Digital Masterworks Art-TV, a prototype of which was displayed to news media today, is housed in a Thomas Kinkade frame designed to accentuate the fine art theme.

As conceived, the 46-inch diagonal Art-TV would allow viewers to switch between any number of digitally re-mastered pre-loaded Thomas Kinkade paintings or original 16x9 art digitally created by Thomas Kinkade specifically for the new medium.

“From the outset, we’re going to deliver a truly superior digital viewing experience, that’s a quantum leap beyond the staid world of screen savers, an easy-to-enhance electronic gallery befitting the tradition of artistic excellence that has been a hallmark of Thomas Kinkade art,” said Todd Stewardson, Vice President, Thomas Kinkade Company. “We will later modify our planned system to permit consumers to be able to see the brush strokes, shading and texture of the canvas in a rendering comparable to the finest artistic reproductions,” he added.

Hidden touch controls then also would permit viewers to electronically flip through their favorite Thomas Kinkade selections, showing one, two, four or all of the selected paintings at once. Users would also be able to zoom in and out of portions of any painting.

What hasn't been discussed is the most obvious fault of the system: it would presumably have to be on 24/7. If you're into energy conservation that would rule out this product, and your flat panel is going to hit its 40,000 - 60,000 hour mark a lot more quickly (4 - 7 years) with that type of use.

Plans are for the new system to be first available late this year, through any Thomas Kinkade Signature Gallery worldwide. Sometime in the second half of 2009, the Thomas Kinkade Company may also make it available through a select group of leading retailers.

Read the Complete Thread
itschris posts on June 10, 2008 12:20
I think these are the first steps of a major change ahead of us in the next 10-20 years. Think about the GRID and even vaster broader transport systems and think about how display technology will change in that same timeframe. What if a super thin panel, super high contrast, energy efficient display technology (maybe even advanced OLED) became the norm. What if you could put a 4'x5' 1/8" thick screen on the wall that you could steam art too it… why would you ever buy art at that point.

Think about the work place… why would you go to an office. At some point many of us will just have huge screens at home and work in a virtual office where we can go have a meeting whomever we want… we can see them, hear them, in real time. We do that here at my office sometimes and it's kinda of amazing, but think about where it'll be a decade from now.

Given that, if you're an artist, would you rather sell one painting for $1,000, or lease it out to 100,000 people for a $1/month? I think that's where we're headed and many things as we know them are going to change… and I think that change is happening faster and faster.

I don't want to be like the last guy in the country making buggy whips. I'm sure he made the finest buggy whip ever to be held your hand, but as he looked out his window and saw cars, I wonder what he thought.
Pyrrho posts on June 10, 2008 10:18

Just because it is a bad idea, that does not mean that it won't achieve the goal of being in business. The point of being in business is, of course, turning a profit; making worthwhile products is basically irrelevant. There is a lot of garbage that has been sold to suckers over the years, and the money from the sale of garbage is just as good as the money from the sale of worthwhile products.

I doubt it will sell very well, but I am no expert on what stupid people will buy, so I could be wrong about this. After all, a lot of people have bad taste, so maybe they are on to something with this. I will reserve judgment on the wisdom of the marketing department of Samsung until after I hear about whether they make money or not. We need not, of course, wait to judge that they have bad taste.
unreal.freak posts on June 07, 2008 13:34


I've got a couple more that are not hung at this time siince we don't have room.

Those are very nice!! My wifes dad Loves lighthouses. He is a Baptist preacher and he relates what a lighthouses were to ships, to what Jesus is to todays Churches. Im in agreement with him Kinkade sure can pick some awesome color combinations. Nice colloection man! Do you have any other artists?

admin, post: 420211
Samsung announced today that it has collaborated with The Thomas Kinkade Company to develop an LCD TV that would be able to shift between artwork and TV programming at a moment’s notice.

The REAL kicker is that it will change at random. One minute, Super Bowl and Nascar will be on… and then all of the sudden, a picture of dogs dry humping themselves
majorloser posts on June 07, 2008 12:29
Sorry for the lousy pics (glare).
I like lighthouses, too


I've got a couple more that are not hung at this time siince we don't have room.
Post Reply