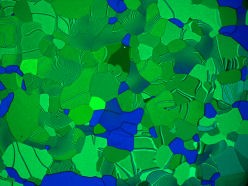 Samsung Electronics announced today that it has developed the world’s first “Blue Phase” LCD panel – which will offer the ridiculously fast image-driving speed of 240 Hz. Samsung is planning to unveil a 15” model of its Blue Phase LCD panel at SID (Society for Information Display) 2008, which will be held in Los Angeles from May 18 to 23. Before you get all excited, however, we're still classifying this as very "prototype-hype" technology since, while promising, it isn't slated for mass production until sometime in 2011.

Samsung Electronics Executive Vice President Souk Jun-hyung, who leads the Display R&D Center of LCD Business was quoted as saying “Our blue phase mode is a major evolutionary development beyond conventional liquid crystal modes. Samsung’s development of this technology provides a tremendous opportunity to move image quality of LCD screens much closer to that of a real moving image.”

Well, it's certainly fast. The true test will be to see whether the video processing capability of sets based around this technology can truly make good use of the increased image refresh speed and not cause deleterious artifacts in the process.

Developed with an extremely cost-efficient design, the Samsung Blue Phase mode does not require liquid crystal alignment layers, unlike today’s most widely used LCD modes such as Twisted Nematic, In-Plane Switching or Vertical Alignment. The new Blue Phase mode can make its own alignment layers, eliminating the need for any mechanical alignment and rubbing processes. This reduces the number of required fabrication processes, resulting in considerable savings on production costs. That ios awesome for consumers and is just another example of why LCD has several years of "shelf life" ahead of it. Additionally, blue phase panels will reduce the possibility of bruising the LCD panel interface (whereby pressure on the screen could impair uniform brightness).

Blue Phase LCD technology was actually (according to our sources) discovered at Cambridge University in August 2005 by some researchers in the Department of Engineering. How and when Samsung got wind of the technology is unknown - we're just glad to see new display technologies when they arise.

Currently, "overdrive" circuits are applied to improve the video image quality in LCD TVs which are driven at 120Hz. The blue phase mode features a superior response rate, allowing images to be reproduced at 240Hz or higher without the need for any overdrive circuit. Apparently, the term “Blue Phase” was coined when the technology’s developers observed bluish hues while watching their new liquid crystal model in operation.

While other academic and corporate institutions have researched this new liquid crystal mode, Samsung is the first to unveil a commercially viable product prototype using the “Blue Phase” technology and not just another tricked-out overdrive circuit.

Samsung Electronics says that it expects to begin mass-producing its Blue Phase LCD in 2011. What's bizare is that they also state the LCD panels will be mainly used in TVs that "require high-speed video reproduction". We're not sure what that means since we know a LOT of consumers who would consider their primary home theater room to "require" high-speed video reproduction - present company fully included.

Read the Complete Thread
AdrianMills posts on May 28, 2008 01:59
I thought the main reason for the motion blurring that can be seen with LCDs is image retention on the retina and the only effective solutions are to either insert blank frames between real frames to mimic CRT/Plasma behaviour or to do a LOT of interpolation and have motion prediction frames. The latter hasn't been very successful so far though. I also thought I read something about LCD having issues with blanking frames too because of non-deterministic times for pixel twisting (depending on the colour).

Clint DeBoer, post: 412885
As a side note - 240Hz (120Hz, etc) is NOT about what the native frame rate is. The video processor does interpolation and fills in more frames, reducing motion blur and allowing images to stay in focus while the move across the screen. 240Hz simply has the added benefit of dividing evenly with both 24fps and 30fps.

But, if the original frame has blur in it due to speed of motion and low camera shutter speed, how would this be eliminated?
Djizasse posts on May 23, 2008 08:33

Well it's one better, isn't it?

Seriously, you're absolutely correct in the sense that they must be able to correctly process the video or all of the increased frequency is worth nothing. What's potentially exciting about this is the advanced LCD technology behind it.

I do notice a TON of motion blur these days and I'd love to get a clearer image on the screen, so I'm paying close attention to see who gets it right.
upyourkilt posts on May 21, 2008 21:29
240 Hertz Refresh……What a joke!