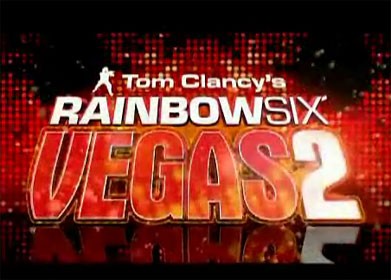 Soon after Ubisoft bought the rights to Tom Clancy’s name, the latest game in the franchise has breached and cleared the 2 million sales mark. That's 2 million copies, not 2 million dollars. Rainbow Six Vegas 2 has surpassed all sales expectations keeping Ubisoft shares in an upward trend.

In fact, sales have been so brisk for the new game Ubisoft has raised its total sales projections for 2007-2008. The company now expects to be somewhere around 920 million euros ($1.44 billion) into the black by the end of the year.

On March 25 Ubisoft announced that it cut a deal to buy the Tom Clancy name. The deal gives Ubisoft the rights to all future books, movies, merchandising and especially video games.  It’s been a great investment for the French video game developer so far.

Details are sketchy but there’s a new Tom Clancy “Air Combat” game forthcoming. Tom Clancy’s End War is a real time strategy game that recreates a possible world war three scenario in 2020. Both new games are slated to be released in 2008.

Read the Complete Thread
dorokusai posts on April 29, 2008 17:19
I have to get off my butt and build a new computer. I've had RS:Vegas sitting on a shelf since day one because my computer is officially not capable of running it

Note to self: Read the bottom of the box, prior to purchase.

Ubisoft released an update patch for this game today on the 360 (ps3 in the works) that corrected the following:


Weapon Switch
Swapping to & from Pistols are now faster in Multiplayer.

Sound Loops
Optimized sound bank to improve weapon firing and helicopter sound clips that loop over and over.

Pings
Servers now update their pings more often so that players have a more accurate value of server performance.

Team Leader Respawn Modification
Spawn Shield is shorter when respawning with the Leader.

XP Modifiers
When there are more people on a team than the other, there is an overall XP modifier applied to all XP gained during the game.

Outfitting
By pressing the start button, players now have access to the outfitting menu in observer mode.

Faster Respawns
Faster respawns for Deathmatch and Team Deathmatch. You no longer have to wait a full 10 seconds!

Custom Search
Players who enter a room using custom search then exit will be brought back to an automatic search with the same criteria.

Rank Reset Glitch
Fixed. Players will be able to use their Xbox guide during the game loading without risk of losing their rank.

Freedom Shall Prevail - Achievement
If you’ve passed all checkpoints on Story Mode on Realistic and finished the game, you will automatically get the achievement after the title update is complete and you load your gamer profile.

That Wasn’t So Hard - Ribbon
Your ribbon now unlocks when you get the achievement.

Light Machinegun Sound Glitch
When firing continuously with any light machinegun, the sound of the weapon will no longer get cut off.

Civilians & Hostages on Tactical Map
No longer are displayed as terrorists.

Out of Map Glitch
Players can no longer cover-peek into each other to raise a team mate above their heads that allows them to walk into areas outside the designated map.

Custom Face
Previously, Custom faces were sometimes copied over to another player’s face. This is no longer the case. Custom faces will display the proper faces.

XP Farming
That one famous area in ACT 1 “Ambush” will no longer allow XP Farming.

Observer Mode
Players will no longer be stuck in the respawn screen at 0 seconds while in observer mode.

I've played through the game a couple of times already. RSV2 is very much like the original. In fact I'd say it feels like an expansion pack with slightly better graphics. The visual improvements are primarily in areas of sharpness and saturation, but detail is still crude and rudimentary. Less foggy with brighter colors in a nutshell.

The maps are of a smaller scale than before overall, which does make for a slightly shorter game. I would say COD4 is longer.

The controls are virtually identical to RSV, though the blind fire accuracy is so poor it is basically worthless with most weapons from anything beyond a close distance. The shotgun being the major exception, which is annoyingly overpowered. I'd go so far as to say the blind fire is broken and needs a fix.

A major complaint is the lack of four-player story coop which is now just two-player. The downgrade to two-player is inexcusable.

Some of the achievements do not work, as in you achieve them but they aren't rewarded. I was able to overcome some of the achievement problems by spending an hour or so online researching how you can circumvent their inexplicable lack of triggering by playing as a guest, but otherwise they are broken.

As before the realistic difficulty is challenging. The game includes a bevy of foul language so be warned, though that may be the least of your concerns. If you don't swear you may start, if you do swear you'll need to make sure the kids are out of the house. This game will likely pish you off! The respawn locations on this game are ridiculous. AI always seems to get behind you, and charge when you are reloading, the AI definitely knows you are reloading. Overall I'd say RSV1 is more difficult, but only because it is longer and you seem to be forced into more compromised positions.

Minor improvements are the ability to shoot through some types of cover, stolen from COD4 obviously, and also the leveling has improved. RSV2 provides more opportunities to rank up offline and rewards you with the A.C.E.S system by being more diversified in your warfare: long range, close range and assault. (grenades and gadgets) which unlock weapon, equipment, and XP upgrades. Again, these new features appear stolen from COD4.

Terrorist hunt mode includes a couple of the older maps including killhouse as well as many new levels that occur throughout the story. It is pretty fun to play with friends as it does include four player. It's also short enough you can squeeze in several games at bedtime.

The story end is certainly more exciting, but that is more and indictment on the poor ending of the first game than an endorsement of this one. Overall, there's not enough to make this game worth 60 dollars for me, and as a result it left me wanting. If you weren't crazy about the first, know thats this is basically more of the same. Yes, it is a sequel, but even so it seems thin. A cash rehash if you will. Multiplayer may be its saving grace, but until it is ironed out, that won't happen either.
GlocksRock posts on April 03, 2008 09:27
How does it compare to the first one? I've been thinking about renting it for the 360.
Wayde Robson posts on April 03, 2008 08:15

Omega Supreme, post: 396281
And the PC version hasn't even been released yet. Just 13 more days to go

Didn't realize it hasn't been released on PC, interesting… even in Europe? So, that's 2 mil sales on only PS3 and Xbox360, very good for Ubisoft.

I have been playing it and might do a review. I haven't finished it yet but it is buggy. I think it's an excellent game. I've heard it's a longer single player story than CoD4 which would make it failry long by this kind of game's standards.

If people say it's too short it usually means it's a very good game.
Post Reply