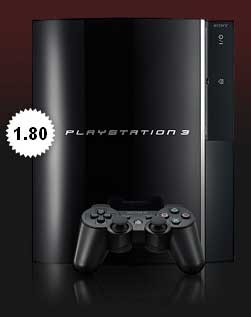 A free v1.80 download upgrade for the Sony PlayStation® 3 enhances the image quality of movies and old video games and allows people to check out stored video, music files and digital photos through the Internet with the handheld PlayStation Portable.

PS/PS2 Upscaler
You can adjust settings to upscale video output from PlayStation2 and PlayStation format software.

PS/PS2 Smoothing
You can adjust settings to reduce the roughness of video from PlayStation2 and PlayStation format software.

[DVD Upscaler] has been added as an option in (BD/DVD Settings) under (Settings). You can adjust settings for upscaled output of DVDs.

You can now display images or play music or video files that are stored on a personal computer or digital video recorder with DLNA Media Server functionality over a network.

What is DLNA?
DLNA (Digital Living Network Alliance) is a standard that enables digital devices such as personal computers, digital video recorders, and TVs to be connected on a network and to share data that is on the connected DLNA-compatible devices.

DLNA-compatible devices serve two different functions. "Servers" distribute media such as image, music, or video files while "clients" receive and play the media. Some devices perform both functions. Using a PS3™ system as a client, you can display images or play music or video files that are stored on a device with DLNA Media Server functionality over a network.

Playing DLNA Server Content
When you turn on the PS3 system, DLNA Media Servers on the same network are automatically detected and icons for the detected servers are displayed under (Photo), (Music), or (Video). If you select an icon, you can play content that is available for shared access on the DLNA Media Server.

You can now connect a USB printer to print images.

To use this function, you must first configure the printer in  (Printer Settings) under  (Settings).

Other new or revised features in version 1.80:

You can update your system software by any of the following methods:

In summary, the upgrade, available for download worldwide Thursday, May 24, will improve the video quality of legacy PS1 and PS2 games, though Sony Computer Entertainment officials admit it won't be quite as dazzling as the quality of PS3 games.

Movies will also look much better on the PS3 thanks to a few improvements in scaling and rendering, which is equipped to deliver higher image quality through next-generation Blu-ray disc technology.

Poosibly the best upgrade has to do with those using PSP in conjunction with a PS3. Currently, those with PlayStation Portables could view content stored in their PS3 through a wireless local area network. This upgrade breaks the strings entirely and allows full Internet access to their PS3 units (minus gaming of course) from abroad - whererver and Internet connection is available.

Read the Complete Thread
Herr D posts on June 01, 2007 03:44
Ok thanks for the info. I'm quite interested in this upscaling function of the PS3.

I'm planning on buying one of the new Pioneers in a couple of months and I was just wondering has anyone compared the pq of the current Pio's when playing SD DVD's if you let the Pio handle the upscaling and if you let the PS3 handle the upscaling?
j_garcia posts on May 30, 2007 11:41
It handles BD and DVD titles differently (PS2 games are DVD), that is most likely the reason why the dispairity - that is why there are two separate configurations for each. DVD upscaling was a more requested option vs upscaling PS3 games (for whatever reason), so that was what they did first.
MrPirate2882 posts on May 30, 2007 09:25
upscale ps/ps2? bah

Ok, the PS3 is more than powerful enough to actually render PS and PS2 games in HD instead of just upscaling. That's just bullcrap laziness on sony's part. If emulators of various game systems that have existed before can be set to non-native resolutions, the same can be done by the company that actually makes the system. This includes rendering in widescreen as well. down with upscaling!
j_garcia posts on May 29, 2007 12:48
I think that would be more often than not, that you are better off with a decent scaling player vs the display's, but then it ovbiously depends on the display. For DVDs, the PS3 seems to do a decent job of scaling to me; I've watched a number of movies with it so far.
Thunder18 posts on May 28, 2007 17:17
I think the point is that some screens' scalers aren't that good and that the player scaling to the screens native resolution can often result in a better image.
Post Reply