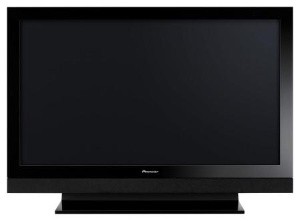 Sure, plasma has taken a beating lately with a couple of major players in the market, including Pioneer and Sony, opting out of manufacturing new panels. But that hasn’t stopped Pioneer from pushing development of its own line of plasma HDTVs.

But how is this possible if Pioneer has quit plasma panel manufacturing?

Pioneer gets its panels from Panasonic, makers of the Viera line. But according to Pioneer reps at CES, it’s not the panel that provides the rich blacks found in second generation Kuro plasmas. Pioneer says "It's how you fire the pixel", claiming it performs that trick with superior filtering and video processing.

In the immortal words of Nigel Tufnel:

"It's like, how much more black could this be? and the answer is none. None more black."

Although the cross pollination of parts among consumer electronics manufacturers is nothing new. I’m not sure how customers will feel about spending premium money Panasonic plasma panels wrapped in Pioneer electronics.

bandphan, post: 414217
yes i know robert and roman, both of whom would probably like you to keep the pricing issue to a minimum. Robert is doing the right thing by adhering to the Elite Dealers requirment. PUSA will authorize sales outside the 250 mile radius, under certian circumstances. I was only talking about MSRP and advertised prices, not pm's.

They only want to keep it hush-hush because they have to adhere to the AVSForum rules. There is nothing preventing us from discussing prices here.
bandphan posts on May 20, 2008 04:25
yes i know robert and roman, both of whom would probably like you to keep the pricing issue to a minimum. Robert is doing the right thing by adhering to the Elite Dealers requirment. PUSA will authorize sales outside the 250 mile radius, under certian circumstances. I was only talking about MSRP and advertised prices, not pm's.
Biggiesized posts on May 19, 2008 14:30

bandphan, post: 413338
according to PUSA the retailon the pro111fd will be 5k, te retail price you got was mis qoated. the pro141 sig series msrp is TBD in the usa.

I didn't get misquoted. I know the MSRPs are $4K and $5K respectively. However, when you buy from an authorized dealer, they can sell them to you below MSRP unlike big stores like Best Buy, etc.

The dealer who quoted me was BuyBestPlasma.com. If any of you visit the AVSForum, you may have heard of Roman. He used to work for Invision Displays, but now works for the aforementioned. I also talked to another Elite dealer from CA (Sing Young, Inc.) who said he'd match those already low prices.

N.B. Pioneer said they're trying to crack down on Elite sales policy such as Elite dealers can't sell those TVs to customers more than 250 miles away (the policy is designed to be a value added feature to local Elite dealers). However, both dealers said they'd honor the warranty regardless of the policy.

There are a few other Elite dealers you can talk to at AVSForum. Axxis Audio is a dealer in CO and Robert (DTV TiVo Dealer) from ValueElectronics.com is located in NY. However, Robert said he's following policy this year and restricting Elite sales to the 250 mile radius. All of them are good guys to negotiate with. I don't have quotes from them yet, but I'd suspect they'd all be very close to one another, if not the same (they all attended the same dealer training just last week).
mouettus posts on May 17, 2008 14:47

Soundman, post: 413427
As far as movie watching goes, wouldn't the excellent processing capabilities of an Oppo DVD player or PS3 help with this issue?

It's not a source problem. 1080i tv via a great box and a panasonic blu-ray player. both had so-so processing. Maybe I could go to another store but I wasn't impressed at first. Last years' semmed better.
Soundman posts on May 17, 2008 14:34

mouettus, post: 412986
The thing with Pioneer vs Panasonic is not only the slightly better blacks for for Pioneer; it's the big difference with image processing. I've seen this year's PZ-80 and 85U and they are far from being that good. I mean, we can clearly see some noise. Blacks were very good though. But when you look at a Pio, it's like you were looking thru a window.

3400$ shipped is not bad at all. I would buy one if I lived in the states. You don't see those kinda deals in Canada.

As far as movie watching goes, wouldn't the excellent processing capabilities of an Oppo DVD player or PS3 help with this issue?
Post Reply