Save the World with Remote in Hand – Philips Eco HDTV 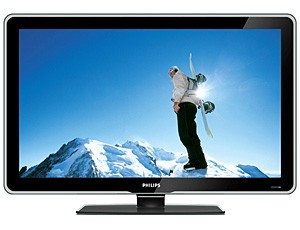 Maybe you can make a difference with a remote control in one hand while laying on your couch. Philips has a new line of Eco friendly HDTVs that feature a cleaner parts and a dimmer feature to let your LCD panel use less energy.

Can there be any more grievous a platitude than saving the world through consumer goods? Flat panel big-screen HDTV has long been a symbol of material wealth - along with that Caddy Escalade used to run across town to pick up groceries.

But the developments of newer (and flatter) HDTV technologies have also been about energy efficiency and declining cost. Judging by the way your eyes roll as you pass the local gas station and the sluggish movement of Escalades, Hummers and Navigators from local showroom floors it seems efficiency is on a lot of minds lately. Perhaps Philips is helping us do our part with a remote control in one hand after all.

Philips has just announced a pair of new eco friendly lines of HDTV. The 5000 and 7000 series are flat panel LCDs designed with several power saving features and all models feature HDMI 1.3a. They’re built with lead-free and environmentally safe, flame retardant components. To save on energy they’ve got built-in ambient light sensors that will adjust the back-lighting to conserve energy while never diminishing picture quality. Even the boxes are made from recycled materials.

Philips’ 120Hz ClearLCD technology provides fast moving images with a standard refresh rates that suits both film shot at 24 fps and video shot at 60Hz. For more specifics including model pricing check out the Electronic House.

I'm not sure. When I tried to investigate this set I couldn't find any more information than was published on the Electronic House site, not even on Philips own site.

I've seen ambient lighting on other HDTVs but who knows how it's implemented. They could be reducing light output without saving any energy, in fact depending on how they're reducing the back-light on certain ambient sets it could be using even more energy.

That said, I really think any LCD is environmentally friendly compared to CRT and Plasma. As far as I know it's the most efficient display made today Possibly outside of OLED but I'd need more info and OLED has a long way to go to be called a legit display type.

Another thing is that lead-free solder and other parts is a good step for Philips. But Hitachi has been doing that for years on all of its sets. Just because a company like Philips waves the green flag about a product you still have to be a bit skeptical… but it is a start!

Philips says nothing of using PVCs or Bromine which you have to asssume any electronics contain unless otherwise specified.

This is why it's vital to dispose of electronics correctly. Find out how your local municipality deals with tossing out old TVs, VCRs and especially anything with optical drives like laptops. It may seem like a small thing to toss them into the dump… but they add up.
MDS posts on June 17, 2008 23:48
To save on energy they’ve got built-in ambient light sensors that will adjust the back-lighting to conserve energy while never diminishing picture quality.

Doesn't pretty much every TV have that ‘feature’? It goes by various names like DynaLight but the principle is the same - adjusting the black level according to ambient lighting conditions. Does the Phillips implementation somehow reduce energy usage? I'm thinking no…
Adam posts on June 17, 2008 23:27
Thanks for the article. I saw some deals on these earlier this week. They seem pretty affordable, and I mostly like the look of them. The rounded clear border reminds me of the older iMacs, though, and I'm not sure that's what I want for a TV. I do want to see one in person, though.
Post Reply