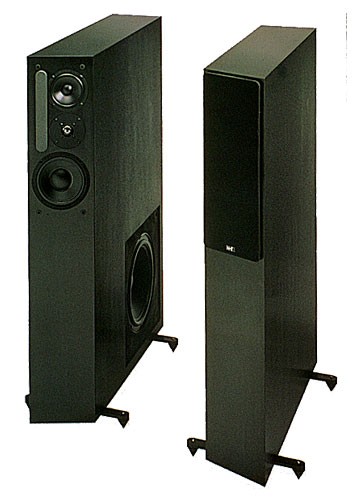 Now Hear This Audio, commonly known as NHT, is looking to sell off remaining stock and close their doors as of March 31st, 2009; at least according to inside information from CE Pro.  The good news is that co-founder Chris Byrne claims this is not the end, it is a transformation.

Founded in 1986 by Chris Chris Byrne and Ken Kantor, NHT has long enjoyed a solid reputation for quality loudspeakers and innovative designs that have lead the market and driven emulation from competitors.  The hallmark NHT loudspeaker design was gloss piano black with a narrow, angular profile, and side firing woofers with excellent imaging, no need to toe them in, as the baffles were tilted inward.  While I never personally owned any NHT speakers, my familiarity and respect for the brand harkens back to my earliest dabblings in audio.

According to a letter from NHT co-founder, Chris Byrne, that while times are hard, the company has not gone bankrupt, they are looking to take a step back and evaluate the changing state of the audio business and consumer attitudes.  After this time of reflection, NHT claims they will reemerge with a new direction, the right direction.

It's time to turn down the lights: NHT is going quiet.

Over the next 60 days we're going to sell the remaining professional and consumer inventory through our existing dealers and distributors, pay our bills, and then spend time rethinking the future of NHT. However, you should know that we are not bankrupt. Everybody here is fine and no, the car didn't get hit by a train. In a way this difficult economy provided the right opportunity for the change in strategy we felt has been necessary for some time.

One thing that is for sure is that this is not about our love for or commitment to the brand. It isn't about the audio business, either. It's all about the realities of the world and how consumer attitudes are changing, and how we as a brand and an industry can best respond to the need for real invention. We're anxious to get moving. When we do, it will be in the right direction.

NHT has always stood for something more than a great speaker. Our philosophy has to do with a way of thinking – about value, about fair play, about paying attention to what matters, about integrity. For us, it's a way of life.

We have a colorful history that included our share of distractions, but we hope we have made the speaker industry a little more interesting and helped in raising the bar.

We believe March 31, 2009 is to be the last day of "regular" business, at least for now. We intend to offer customer service and repair services for both in and out of warranty, available ongoing. Keep an eye on our website (nhthifi.com) for more details and the occasional update.

Remember, this isn't good-bye, it's just "see you on the other side"

So that leaves all the rest of us guessing where this might be going.  From the sound of what is being said, the fellows over at NHT have had this on their minds for a while.  A bad economy where sales are significantly down anyways might be the least difficult time to reorganize a brand in a new direction with minimal loss of potential sales over the period of absence.  It also allows some of the costs inherent in actively being in business to be curtailed at a time when those costs might be enough to drive a company out of business.  On the other hand, what this means to the employees who still have to pay their own bills is unclear.

As far as the practical details, NHT intends to sell of remaining stock through existing dealers and close shop by March 31st.  So if a new set of NHT loudspeakers has been on the radar, now is the time to buy.  Byrne claims that existing NHT customers will not be left out in the cold with the company will still providing in and out of warranty service and support.  According to the letter, anyone looking for details and updates should visit www.nhthifi.com for future developments as they occur, but not just yet as I could not find any mention of this on the NHT website as of yet.

Times are tough, retailers like Tweeter and Circuit City have gone under and with electronics manufacturing giants like Sony losing billions of dollars, Philips licensing it’s North American business to budget manufacturer Funai, and Pioneer dropping out of the plasma HDTV business all together, its not hard to see how hard things must be for smaller A/V manufacturers.

So, here’s hopping that NHT can find its way through their self imposed exile and soul searching to re-emerge better than before.

Read the Complete Thread
CraigV posts on March 05, 2009 13:28
It would be a downright shame if this company disappeared – some very fine speakers came from NHT. I’m kind of surprised we’ve not heard about more higher end audio companies having trouble in these “tough economic times”. Can’t imagine there are many people with disposable cash (or decent credit) looking to pay for this kind of gear.
Wayde Robson posts on March 05, 2009 13:10
There are more NHT speakers in my house than any other brand. They’re the first speakers I actually spent money on.

I’ve always been interested in the Classic four but I never considered them a significant enough upgrade from the ST-4 I already own. I’ve always loved the brands trademark laid-back, relaxed sound. I think the company’s products sonic qualities can be summed up as being on the opposite end of the spectrum as comparably priced Klipsch. I’ve always thought that for musical speakers in that general price range you’re either a fan of one or the other. I have a friend who spent about the same amount on some Klipsch so we’ve done a lot of back and forth comparisons.

It’s sad to see them go but hey, they’re a company and they have to do what they have to do. There are lots of great speakers out there, I wish Byrne all the best in future endeavors.
cwall99 posts on March 05, 2009 13:05
Love NHT

I got re-introduced into better audio when I bought a pair of NHT 1.3As about 16 or 17 years ago. I love their sound, and still use them. While their role as front main speakers in my system has been taken over by a pair of B&W603s and a B&W LCR600, the NHTs are still an integral part of my main system. It's just that now they're my surrounds.

Still, they've played an excellent part in my life and I'm looking forward to many more years of use. I love their sexy, glossy, black finish, and think they really are a fine speaker.