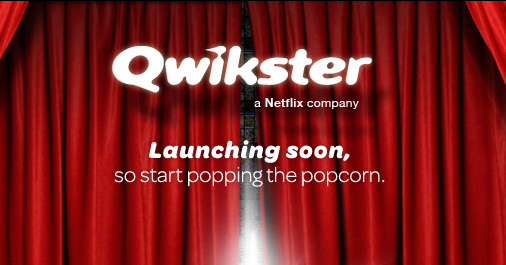 We got this letter today from Netflix - part apology, part revelatory explanation of their recent price increase and plan-separation between DVDs-by-mail and streaming movie services. Turns out, Netflix has a lot more up its sleeve than we thought, though it all makes sense given recent moves and the rumors that have been cycling of late. Here is the letter in full:

I messed up. I owe you an explanation.

It is clear from the feedback over the past two months that many members felt we lacked respect and humility in the way we announced the separation of DVD and streaming and the price changes. That was certainly not our intent, and I offer my sincere apology. Let me explain what we are doing.

For the past five years, my greatest fear at Netflix has been that we wouldn't make the leap from success in DVDs to success in streaming. Most companies that are great at something – like AOL dialup or Borders bookstores – do not become great at new things people want (streaming for us). So we moved quickly into streaming, but I should have personally given you a full explanation of why we are splitting the services and thereby increasing prices. It wouldn’t have changed the price increase, but it would have been the right thing to do.

So here is what we are doing and why.

Many members love our DVD service, as I do, because nearly every movie ever made is published on DVD. DVD is a great option for those who want the huge and comprehensive selection of movies.

So we realized that streaming and DVD by mail are really becoming two different businesses, with very different cost structures, that need to be marketed differently, and we need to let each grow and operate independently.

It’s hard to write this after over 10 years of mailing DVDs with pride, but we think it is necessary: In a few weeks, we will rename our DVD by mail service to “Qwikster”. We chose the name Qwikster because it refers to quick delivery. We will keep the name “Netflix” for streaming.

Qwikster will be the same website and DVD service that everyone is used to. It is just a new name, and DVD members will go to qwikster.com to access their DVD queues and choose movies. One improvement we will make at launch is to add a video games upgrade option, similar to our upgrade option for Blu-ray, for those who want to rent Wii, PS3 and Xbox 360 games. Members have been asking for video games for many years, but now that DVD by mail has its own team, we are finally getting it done. Other improvements will follow. A negative of the renaming and separation is that the Qwikster.com and Netflix.com websites will not be integrated.

There are no pricing changes (we’re done with that!). If you subscribe to both services you will have two entries on your credit card statement, one for Qwikster and one for Netflix. The total will be the same as your current charges. We will let you know in a few weeks when the Qwikster.com website is up and ready.

For me the Netflix red envelope has always been a source of joy. The new envelope is still that lovely red, but now it will have a Qwikster logo. I know that logo will grow on me over time, but still, it is hard. I imagine it will be similar for many of you.

I want to acknowledge and thank you for sticking with us, and to apologize again to those members, both current and former, who felt we treated them thoughtlessly.

Both the Qwikster and Netflix teams will work hard to regain your trust. We know it will not be overnight. Actions speak louder than words. But words help people to understand actions.

p.s. I have a slightly longer explanation along with a video posted on our blog, where you can also post comments.

Here is a video from Reed Hastings, Co-Founder and CEO of Netflix:

Read the Complete Thread
nancyswish posts on September 24, 2011 04:59
nice to hear so much of R-version

Hi, i am new here and want to say hi. Thank you!
sholling posts on September 23, 2011 21:31
BlockBuster Streaming Announcement

Dish Network claimed that the service will offer 34,000 streaming movies and TV shows on TVs and computers, including Starz content, which will no longer be available to Netflix customers next year after contract-extension talks fell through with that company earlier this summer. Using the same accounting procedures, which were not disclosed, Dish said Netflix offers 31,700 streaming videos; Netflix says it offers 20,000 streaming options.

Blockbuster's DVD-by-mail service offers the same amount of content as the soon-to-be-Qwikster service, more than 100,000 DVDs and video games. Dish, which purchased the bankrupt Blockbuster franchise in April, said that service had already added 500,000 subscribers in the past 30 days, presumably customers who had left Netflix in the same time frame.

mtrycrafts, post: 832137
When did you run into this? If I remember correctly which is questionable I have rented unrated movies there and the 3 Dragon girl movies that seemed to be unedited and could have been X rated or maybe it was unrated.

There were stories about this some years back. Blockbuster does not now, nor have they ever, directly censored films themselves. That would have been illegal, as they are not the copyright owners. However, anyone can avoid carrying films that they deem to have objectionable content, and supposedly in the past Blockbuster reportedly put pressure on movie companies to release edited versions of some of their films.

From a very superficial search, I have found nothing to determine the actual facts of the past. But they do not seem to be doing any such thing currently, and have unrated films, like Y Tu Mama Tambien, which they could have only in the R version if they wanted it (as the film has been released both ways on DVD; it was released in theaters in the U.S. with an R rating, and is with added material in the unrated version). Usually, in such cases, when the MPAA board first saw the film, it was likely such that it would get an NC-17 rating, and in order to avoid that, the studio edits the film in order to get an R rating for theatrical release, as many theaters will not show NC-17 films, and many people will avoid them. Really, having the MPAA system results in censorship of films prior to theatrical release, which has nothing to do with Blockbuster.

But, of course, the choices that they made in the past for what to have available and not available would likely impact what the studios would do, when Blockbuster was the biggest rental store. I believe in the past, Blockbuster tended to avoid unrated versions of films, but I have no means of verifying this one way or the other. It is irrelevant to what they currently do in any case.

Of course, I have no way of determining whether there are local or regional differences in what they offer in individual stores. It is possible for a company to not have unrated films in some stores while having them in others, though I have no particular reason to believe that Blockbuster is actually doing this either. And, of course, they may have more than one version of the same film in one store, as some people would prefer to have an R rated film to an unrated one that, if rated, would be NC-17. So even visiting stores and finding an R version would not mean that they necessarily did not also have an unrated version.
mtrycrafts posts on September 22, 2011 19:34

j_garcia, post: 832088
I don't think they are actually performing the editing themselves, however they do carry only edited versions of movies. Edits that are intended for conservative climates, (think Mormons) that are apparently not approved by the studios or directors (I don't know that for sure). I do know for sure that most R rated movies at BB are NOT what you would see in the theater or if you rented it anywhere else. They don't have the right to choose what I do and don't get to see in a movie, so I no longer rent movies from them.

When did you run into this? If I remember correctly which is questionable I have rented unrated movies there and the 3 Dragon girl movies that seemed to be unedited and could have been X rated or maybe it was unrated.
darien87 posts on September 22, 2011 19:16

j_garcia, post: 832101
$6 for new releases, last time I looked. They have an average selection too. A few great titles and lots of crappy ones. I had the same issue with their connection test as well at my other house, so if I am only going to get SD then it should cost less.