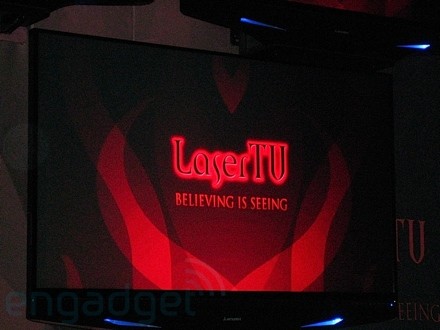 Mitsubishi unveiled its Laser HDTV at CES last month and we have a good idea what the company is going to call its new line. Taking a nod from the text messaging dialect known as L33T SPEAK, Mits has trademarked LAZRTV – yes, that’s all caps.

The company has been working on laser television for years and claims to own 75% of the LED laser market. Laser HDTVs will be another rear projector technology, but will be capable of twice the number of colors as any HDTV available now. Mitsubishi says the new laser TVs will hit the market sometime this year.

A couple of trademark filings have given us a good idea what Mitsubishi is going to call its new sets. LAZRTV and LAZRTELEVISION were the company’s new filings.

Is Mitsubishi trying to market these new televisions to teenagers?

Motorola released a successful line of cell-phones called RAZR, but that was two years ago. I think the all-caps, vowel-challenged text-message style is a little overdone. How lazy are we getting when we can’t even write a simple word like – laser?

Perhaps Mitsubishi should try going in the other direction. Give their HDTV a name like:

Whether LAZRTELEVISION (or whatever Mitsubishi decides to call it) takes off, is anybody’s guess. If the new technology can be made cheap and provide a visibly superior picture over LCD and Plasma, perhaps.

But the general public is currently enamored with flat panels and barely sees a difference between DVD and HD disc formats. I think it’s a lot to ask of them to buy into a rear projection technology only because it can display more colors than the human eye is capable of seeing. I think John Q. Public is going to see it on the floor at Best Buy and assume it’s a step down from the LCD flat panel down the aisle.

Wayde Robson, post: 372579
I think it's pretty funny to see it come full circle now to where we have major corporations copyrighting a dialect that was invented teenagers in the late 1970s and now using it for multi-million dollar marketing push.

This wasn't meant to be about the history of l337 speak, just about the LAZR and it's dated naming convention.

I believe the so-called leet speak form came out of early users of Unix, particularly those using the SCO flavor, but I'm sure each has their own version.

I remember when writing names in all lower case held a sense of pride because it meant that unix users recognized each other over the noise of the DOS newcomers to text based operating systems.

It carried over to IRC chat, then to IMing, then to texting… the form is pretty logical, just the use of shortcuts in language. I don't see it as anything diabolical as many do.

I think it's pretty funny to see it come full circle now to where we have major corporations copyrighting a dialect that was invented teenagers in the late 1970s and now using it for multi-million dollar marketing push.
Post Reply